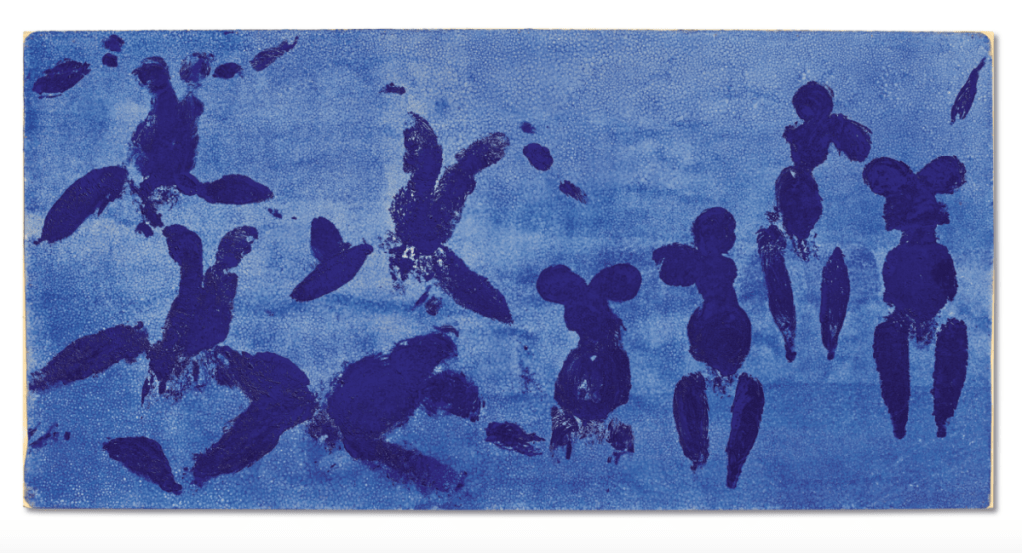 Christie’s held two back-to-back modern and contemporary art auctions in London and Paris on Tuesday afternoon, raising a total of $250 million in fees.

The 106 lots on offer included works by young newcomers such as Anna Weyant and pieces by long-gone art historical personalities such as Claude Monet. About 97 works were sold, with one work by Cy Twombly having been withdrawn in advance. Twenty-eight lots in the auctions were guaranteed; 24 of them were secured with irrevocable bids.

In fact, the Paris section focused on European artists. Works by Yves Klein, Pierre Soulages, Jean Paul Riopelle and Jean Hélion L’escalier have sold for as little as $1.2 million to $2.2 million.

The total hammer price for the entire grouping across both sales before fees was US$200.7 million, at the lower end of the pre-sale estimate of £145-213 million (US$177-259 million). Among the high profile visitors seen in the showroom was retailer Helly Namad.

Blue chip male artists accounted for most of the top lots.

Yves Klein’s 1960 canvas Anthropometrie de l’époque bleue, (ANT 124), which was first offered for sale at Christie’s auction. The blue-toned painting, which Klein executed using a sponge technique, was offered for £24 million ($30.2 million). Five bidders competed for the work, which sold for a final price of £27 million (US$33.4 million), going to one bidder who spoke to Christie’s London specialist Guy Agazarian on the phone. The result makes it one of Klein’s most valuable works to be auctioned, considering the price is still below his current record of $36.4 million, set by the sale in 2012 FC1 (Fire Color 1), ex 1962

A metallic pink Jeff Koons sculpture titled Balloon Monkey (Magenta), 2006–2013, was sold by Ukrainian-born billionaire philanthropist Victor Pinchuk and his wife Olena to raise money for medical care for Ukrainian soldiers during the ongoing war with Russia. The work sold for £10 million ($12.6 million), within its estimate.

The Koons was won by another mega collector, Copenhagen-based collector Jens Faurschou. In a post-sale statement, which referenced charitable initiatives in the art world, Faurschou said, “We need more.”

Rene Magritte travel souvenir (ca. 1962–63), depicting a gray stone apple and a crescent moon against a cloudy sky added some excitement to the sale. A prolonged bidding war between five bidders resulted in the work’s hammer price exceeding the high estimate of £5 million ($6 million). The work sold for a final price of £16 million (US$19.7 million) to a bidder who spoke to London-based Christie’s specialist Guy Agazarian on the phone.

Fresh off a new record set during last month’s New York tent auctions, Ernie Barnes was represented by Pool bar on the main street (1978), a nighttime bar scene. The painting jumped above its original estimate of £80,000 ($97,000) to fetch a final price of £1.5 million ($1.8 million).

A sculpture by Simone Leigh, which received the Golden Lion at this year’s Venice Biennale, opened the event in London. The work, Untitled V (Anatomy of Architecture series), featuring a bust of a woman adorned with roses and straw, which sold for a double estimated final price of £724,500 ($880,000).

A 2003 painting in acrylic and graphite on canvas by Michel Majerus titled Milky Way, which features the work’s title in bold, fetched £403,000 ($490,000), more than double the estimate. Majerus is the subject of a survey at the KW Institute for Contemporary Art in Berlin, which is scheduled to open in October.

Half of the living artist auction listings were made by women. A work by 27-year-old painter Anna Weyant, who recently joined Gagosian (the eponymous dealer is said to be her romantic partner), topped his estimate. Her painting from 2019 Ingrid with flowers sold for £403,000 ($490,000), more than double the estimate of £150,000.

Leonora Carrington, whose writings gave the current Venice Biennale its title, was represented by ferret race (stoat race), which saw competition from three bidders. It went to a Hong Kong buyer for £1.4 million ($1.7 million). The result was still just short of the artist’s current record of $3.3 million paid The Garden of Paracelsus (1957) in May.