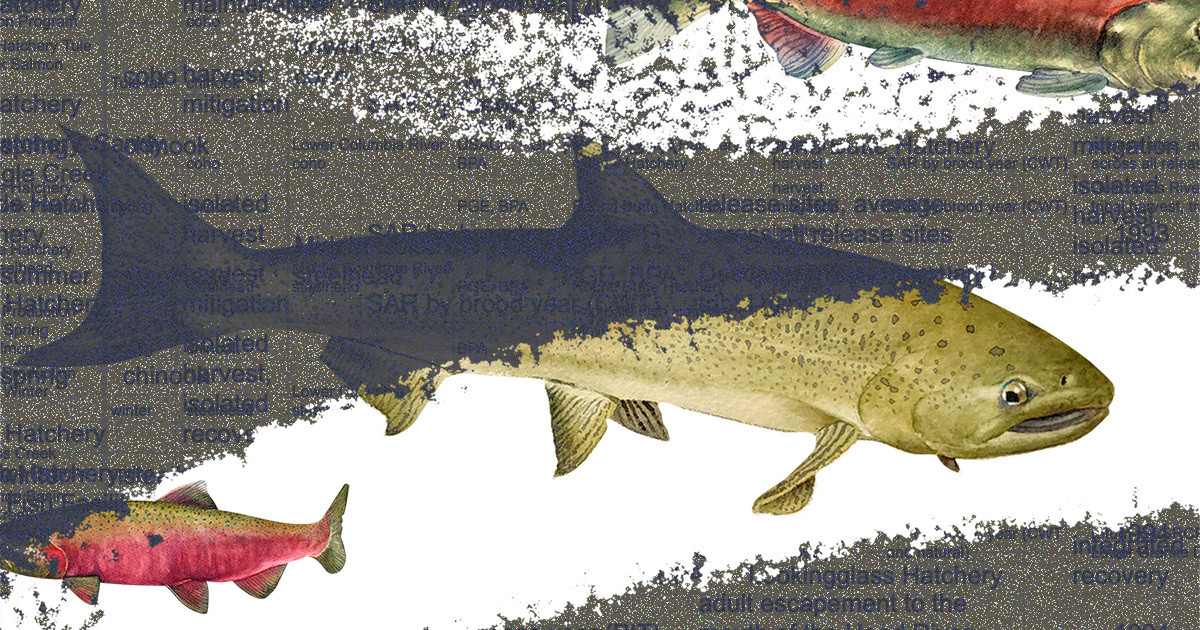 Yes, we fact-checked these watercolors – ProPublica

This column was originally published in Not Shutting Up, a newsletter about the issues of journalism and democracy. Sign up for it here.

My colleague Irena Hwang mostly works with numbers. An electrical engineer by training, she turns impossible data sets into understandable sentences that word-bound people like me can understand. What she does seems like a kind of intellectual alchemy, extracting solid and valuable facts from barely visible particles of knowledge.

But this year, as Oregon Public Broadcasting and ProPublica worked to document the extent to which Pacific Northwest salmon hatcheries are failing to keep fish at healthy levels, another of Irena’s talents came to the fore. One she had kept secret.

Since November, we—and by that I mean them—had been trying to count fish: specifically, the large numbers of salmon released into the Columbia River by government-funded hatcheries to swim down to the Pacific, and the much smaller number that caught the hard Graduated back upstream. Her co-reporter, OPB’s Tony Schick, found through interviews that not nearly enough salmon survived. Despite more than a century of US promises, native tribes lost access to traditional fishing and with it their way of life. Counting fish would help us prove that.

The publicly available data and expert reports have measured fish flow in myriad ways, and Irena’s analysis goals seemed to change with every conversation. Irena read hundreds of pages of reports, spent hours conducting interviews with fish scientists, and along the way encountered a number of dry riverbeds—data wise.

Little did I know, however, that Irena was working on more than just the dates. In mid-April, at one of our weekly project meetings, she presented a draft of the story art, including some fish icons from around the web, and asked us which style we liked best. I hadn’t really focused on them, but I saw that they were very different. One, a digital illustration with hard lines and consistent colors, was almost caricature. Another looked hand drawn, with subtle color variations. We all agreed that the more detailed and colorful version is best. In hindsight, Irena was about to shake her hand, but I didn’t think anything of it at the time.

Irena, however, was thinking. “I did a lot of art when I was a kid,” she later told me, but “when it came time to go to college, I got into highly technical work, and the art just fell by the wayside .” She said she occasionally thought about art but felt paralyzed. “I didn’t feel creative enough to be, quote, a true artist.” As she worked her way through a bachelor’s, master’s, and PhD in electrical engineering, Irena said she lost motivation more than a few times each year to sketch or even to scribble in the margins of a notebook. She stopped visiting art museums.

Then the fish project rolled around. There was an empty space for illustrations to go. And she thought that maybe she had avoided art because “it was this big open-ended thing”; that it might be easier with some structure. A simple task – just four anatomically correct fish! – with a deadline seemed to be exactly the kind of closed project Irena was looking for. She wrote to one of ProPublica’s picture editors, Andrea Wise, and shared two older posts she had made. Andrea immediately said that she would like to do some artistic directing, while Irena created illustrations for the story.

Seen in this way, painting and data work are very different. As Irena said, “Coding taps into the part of my brain that’s good at planning complex tasks and breaking them down into small components. But when I paint, I let the other half of my brain take over, the part that seems a little mysterious and muddy and does things because they just feel – and look – right.”

But while that distinction is very real, it’s not the whole picture. As I spoke to Irena about the four beautiful watercolors she created for this project, I also realized that she brought the same intensity to her art that she brings to her data work every day. She briefly considered creating stylized fish in Adobe Illustrator—it would have been easier—but settled on drawing fish, which were as accurate as they were beautiful. And painting visually accurate fish for ProPublica took a lot of research.

When she tried to find the right source photos to base her work on, the variables were almost as endless as the data she analyzed. For one, “there is a lot of sexual dimorphism in fish”; That means the males and females of a species can look very different. There are also geographic differences: an Alaskan chinook may mature to a completely different color than an Oregon chinook.

In addition, each fish looks different at different points in its journey, sometimes undergoing dramatic changes as it swims upstream to spawn. Most salmon species are silver in the ocean but break up to browns, greens and bright reds as they make the freshwater journey to the spawning grounds. Chinook, Coho, and Sockeye males can develop a distinctive, hooked upper jaw. Male sockeye has a prominent hump. And, Irena pointed out to me, fish actually look different in water than they do in hand when held up for the trophy shot. She had created files and folders with fish research. But if she could only depict one image of a coho salmon, which coho salmon would it be?

“There were a lot of really funny nerds,” she admitted. “One of my nightmares was that someone would write and say that’s not what a salmon looks like.”

Ultimately, Irena had to make some key decisions she could stand by: she focused on fish when they returned to spawn, and decided that these brightly colored fish would have a more iconic recognition than her silvery ocean self. She focused on underwater fish to capture their brilliant colors in their original state. And noting that many of the images available were of the more colorful male fish, she decided, “Yes, we’re going to show female fish!”

Surely it was an artist who created these watercolors for publication. Even Irena seemed to experience it that way. “What I love about watercolor is that it’s very transparent. You work in layers, so every time you add a layer it’s like you’re revealing something that’s been hidden in the paper all along, waiting for you to bring it out.”

But the engineer in her wasn’t far away. These images needed to be checked. Irena needed to know that despite her careful selection, her pictures had turned out just right.

Some of the flaws were obvious: she had forgotten to give the Chinook “something that looks like a nose on a salmon.” We fought over the technical term. She googled it. “Nostrils! I had to give him nostrils!”

Some of the flaws were in the eye of the beholder: She sent three of the images to Tony, her co-reporter, who shared them with his more experienced fishing colleagues at OPB. One suggested that the Chinook’s jaw should be more hooked. “I do the females,” Irena fired back, ending this problem.

The colors were perhaps the biggest issue of all. The original image Irena edited for the Chinook was taken in a sunny area of ​​a river, resulting in a fish that was a little more golden in hue than most anglers would recognize. Photoshop helped turn it into a more recognizable olive brown tone.

And then there were the total misfires. Irena mentioned that there had been an earlier Steelhead painting that was completely different from the one we had published. She had struggled with this because mature steelheads have intense colors, but the source image she was working on was full of colors that Irena feared would combine into a muddy mess. To avoid a monotonous fish, she chose paint colors that accentuated the highlights – and ended up with one that was too bright.

i wanted to see it So she sent me this message via Slack: “Was that even a Steelhead? In hindsight it is unclear.”

She added a little grimace emoji and then the photo of her earlier painting.

Steelhead or not, I honestly wouldn’t have known. I wrote back to Irena: ‘It’s very nice. Just a different light, in my opinion…”

I asked Irena about painting as a journalist. “It was definitely fun. It was also stressful because I’d never painted on time,” she said. On the other hand, it was clear that there was something to their concept of making art within structures: Before, “I was walking around thinking I was too much an engineer to be an artist and too much an artist to be an engineer”, she thought. The fish project seemed to bring these two different sides of their brains closer together. “That’s why I love journalism so much.”