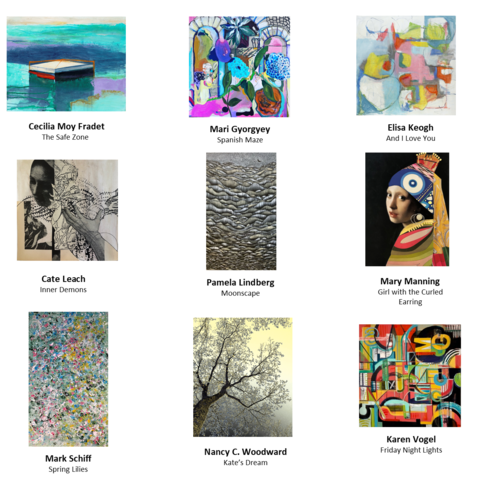 Mari Gyorgyey is best known for her non-linear storytelling, which is incorporated into book art, pen drawings, paintings, computer images, and art etchings. She is not afraid to mix and match any of the techniques to communicate her subject. Her whimsical and satirical drawings have been compared to those of Philip Evergood, William Kentridge and the pre-war drawings of George Grosz. Since receiving her BFA from the Rhode Island School of Design and her MFA from the University of Pennsylvania, Gyorgyey has shown her work nationally and internationally with solo exhibitions in Tapio Gyorgy and Budapest, Hungary, and in Stamford, CT. She has won printmaking awards from the University of Pennsylvania, the Dharma Silk Company, and the Center for Contemporary Printmaking, of which she is a longtime member. Mari examines the conflicts and harmonies of Hungarian communities and explores what it’s like when two identities vie for supremacy. Mari’s work integrates her background in fine arts and textile design. Its content is heavily influenced by life in communist Hungary and the American suburbs. Marigyorgyey.com

Elisa Keogh grew up in the UK and came to the United States at the age of 19 to pursue her dream of working in a New York advertising agency. After studying graphic design at the School of Visual Arts and Parsons School of Design in New York City, she pursued a successful career as a commercial artist (advertising and later music industry) and founded her own studio, SeeHear Design. She moved to Connecticut and shifted her focus to fine art photography. For nearly two decades, Elisa has exhibited her experimental photographs in the United States and abroad and has received significant recognition for her work. During the pandemic, she devoted herself more to painting with acrylic paint, mainly on canvas. Elisakeogh.com.

Cate Leach is an award-winning artist whose style is characterized by a love of line, a sensitive understanding of composition, and an awareness that the solution often lies in the elimination of the non-essential. After spending many years as a dancer with George Balanchine and the New York City Ballet, Leach finds inspiration and meaning in subtle gestures and an economy of form. Leach’s paintings, prints, and assemblages have been exhibited in museums and galleries throughout New York and Connecticut, including the Lyman Allyn Art Museum, the Housatonic Museum, Sacred Heart University in Connecticut, the Flinn Gallery in Greenwich, Connecticut, and in New York on LaGuardia Airport and the Prince Street Gallery. She is a member of the Silvermine Guild of Artists (New Canaan, CT), The Concepts Group (Darien, CT), the Center for Contemporary Printmaking (Norwalk, CT), and Connecticut Women Artists. Leach maintains a studio at Firing Circuits in Norwalk, CT. Cateleach.com.

Pamela Lindberg trained as a surface pattern designer and has pursued interests in painting, printmaking, photography and most recently encaustic for 35 years. She has exhibited in numerous juried exhibitions and won a number of awards. Love of nature is a recurring theme in her art. She also has a penchant for textures and unique materials and techniques.

Mary Manning is a multi-media, multi-process visual artist who is always experimenting with new materials. She has evolved her practice to include expressive and organic abstract ink paintings alongside colorful collaged pieces. She describes her work as a continuous exploration without rules and conventions, constantly yielding new forms, patterns, themes and textures. She is represented by the online gallery cynthiabyrnes.com from CBCA Westport, CT. It maintains a studio at Firing Circuits in Norwalk, CT and prints in Brooklyn, NY. Marycmanning.com

Mark Schiff uses painting to express his love for nature. He enjoys the spontaneity and unpredictability in his art. His process uses mixed media and altered brushes to create a unique viewing experience. Mark is an award-winning artist having his third exhibition at the Wilton Library. He has exhibited extensively in Connecticut, New York City, Miami, Florida and the Hamptons, Long Island. Markschiffartist.com.