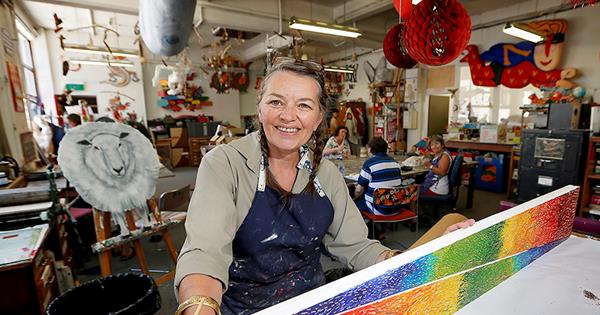 Growing up, Hedy Ankers didn’t think she had a creative bone in her body – but the past few years have proven how wrong she was!

The now sixty-year-old self-taught Kiwi Samoan artist is recognized for her elegant ceramic work and has twice been a finalist for New Zealand‘s most important drawing award, the Parkin Prize.

She is also the trophy maker for the annual Te Putanga Toi Arts Access Aotearoa Awards, which are given to those who make it easier for people of all abilities to enjoy and participate in the arts.

“Instead, I was very withdrawn, had no faith or belief in creativity,” she says.

It took the tragic death of one of her sisters before Hedy’s true path was revealed.

“Her death was such a shock to me, and that day I had another overwhelming experience where Sister spoke to me from the other side.

“She asked, ‘What are you not doing that you know you should?’ I just left because I knew the word immediately – a ringing bell of the word “art”.

“A double rainbow appeared in front of me and I burst into sobs, knowing that she had come to bring me this message.”

In the 1940s, Hedy’s English-Norwegian father, Captain Derek Ankers, and her French-English Samoan singer mother, Audrey Tibbo, got married and moved to Kawerau. Hedy was the sixth of many children, nine of whom survived infancy.

“I was a middle kid who realized, ‘Holy smoke, this is a busy house and I’m calm and alert, so I’ve been watching. I’ve lived my life through osmosis – I absorb, absorb, absorb, and then I express. My parents were both educated and creative, so our house was saturated with culture and full of artifacts. “

Her father’s sister was Hollywood movie star Evelyn Ankers, so the love of acting came from both sides of Hedy’s family. She speaks warmly of getting “the essence of being a Samoan” from Mama Audie, who went out to eel and fish at night.

Hedy describes Derek as a wag with a tormented side who, like many men, is emotionally broken and has returned home from WWII with a drinking problem. When she was six, Hedy’s parents separated and she moved to Auckland with her mother.

It was at this point that Hedy had her first spiritual experiences, which sparked a lifelong interest in the humanities and later in Buddhist meditation.

“I was about four years old, and I can only describe it as a tree and I were in community,” she recalls. “I just knew that I now understood something about the nature of things, and that was such a strong compass needle. I never lost it.”

She also remembers her Samoan grandmother Teuane Ann Tibbo, then in her seventies, who woke up from one dream and painted work of art after another and declared: “I have to paint Samoa.”

Fascinated by the paintings, Audie sought advice from one of her teachers at the art school, acclaimed artist Pat Hanly.

He stated that Teuane’s paintings were special, as were other artists who saw them, which immediately led to exhibitions, dealerships, and museums and collectors around the world purchasing Teuane’s art.

But Hedy wasn’t tempted to make her own art as she lacked confidence and self-confidence due to the harsh climate of a 1950s and 60s childhood. “Even at school you would get a hit. With all the smacking and violence, I was like a rabbit in the headlights. I could see the madness of things – for example, ‘Let’s beat her up and tell her we love her.’ In my heart I knew it was all wrong. “

As an adult, Hedy married, widowed, remarried, divorced, and became a single parent. She moved the family to Wellington because her daughter was enrolled at Victoria University. Hedy graduated from formal studies for the first time, completed a publishing diploma and found a job with a publishing company.

She had already met Vincent’s Art Workshop through a friend, a free community-based art provider for the public, but she still had no faith in everything she was doing. Hedy was now in his late forties and was also in counseling. “This combination of counseling, art and meditation helped me understand that what happened to me destroyed my psyche.”

Now a member and tutor of the Wellington Potters’ Association, her ceramics are sold at Te Papa and the Vessel store. It means that she has joined her famous artist grandmother Teuane in the museum.

“I’m a grandma who, like my grandma, started late,” smiles Hedy. “I really like that Grandma is in the Te Papa Tongarewa collection. The circle has come full circle, but Grandma is still the matriarch because I’m only in the shop!”