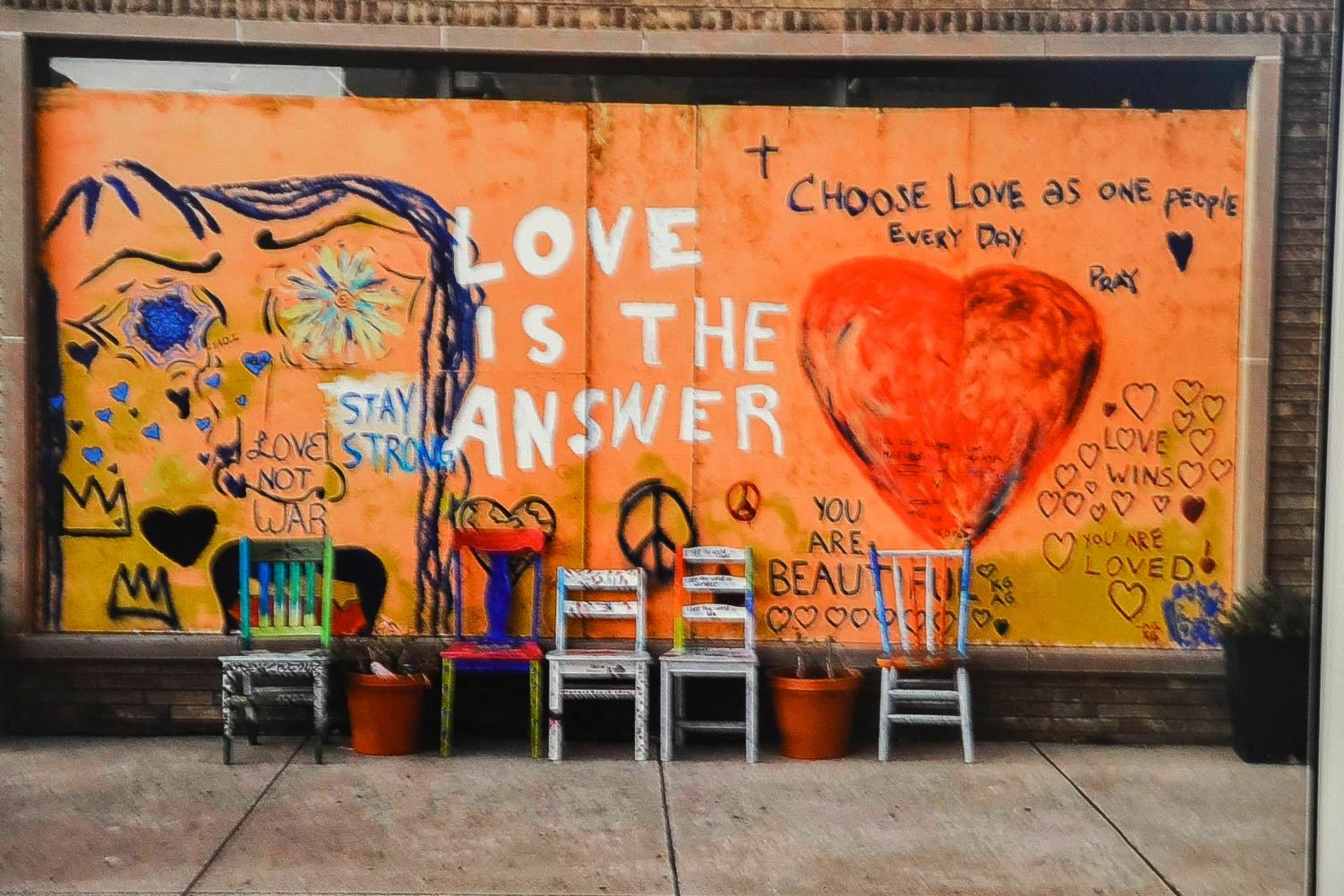 A mural in the Visible/Invisible exhibition proclaims “Love is the Answer”. The exhibition focuses on the underlying forms of violence as seen through the work of Evanston and Chicago artists.

More than 150 people flocked to the Noyes Cultural Art Center on Friday for the opening of Visible/Invisible, a new exhibition featuring work by local artists exploring different forms of violence.

The exhibition, which lasts until March 18, features more than 40 different artists from Evanston and Chicago and a range of two and three dimensional works. Curators Lisa Degliantoni, Indira Johnson and Fran Joy said they worked with these artists for over a year and a half to capture what violence means to the local community.

“It’s a beautiful exhibition because while the goal was to show a simple thing of unseen violence, each piece brings out something different,” Johnson said.

Artists, families, and residents of Evanston and Chicago of all ages attended the opening of the exhibit.

Chicago-based artist Sholo Beverly, whose piece Blacktastic features in the exhibition, said she was surprised and impressed by the wide range of media and messages represented.

“My piece just shows the stillness of what’s happening with our black culture, especially black men,” Sholo said. “If you see the picture, there are many sharp fingers showing how we hide behind our hands.”

Other plays touched on issues such as gun violence, body image, immigration and mental health.

Johnson said the idea of ​​highlighting both overt and covert forms of violence in the exhibit came from Evanston residents. The curators hosted several community talks in early 2020 and formed an advisory board of community members who discussed the impact of these issues on their own lives.

Lynda Crawford, an Evanston resident who attended Friday’s event said she was touched by the exhibit.

“When there’s so much passion, anger and fear behind the subject, it’s just very moving,” she said.

Degliantoni said the curators have made efforts to open the exhibition to younger members of the community. Claudia Marter, a student at Evanston Township High School, has a piece called “Property” in Visible/Invisible.

Marter told audiences Friday that her artworks focus on themes of female objectification and how showing one’s body can lead to both oppression and liberation.

“[The piece]symbolizes how men reconstruct some women into someone they weren’t before,” Marter said. “Or it may be that after that kind of violence she reconstructs herself into what she used to be.”

The curators plan to host a family art workshop and community talk at the gallery in March to discuss the themes of the exhibition.

Johnson said she hopes the exhibition will raise awareness of different forms of violence.

“A lot of the violence that the artists talked about we’re not really aware of,” Johnson said. “Now we can learn from them and hopefully take some action to change that.”