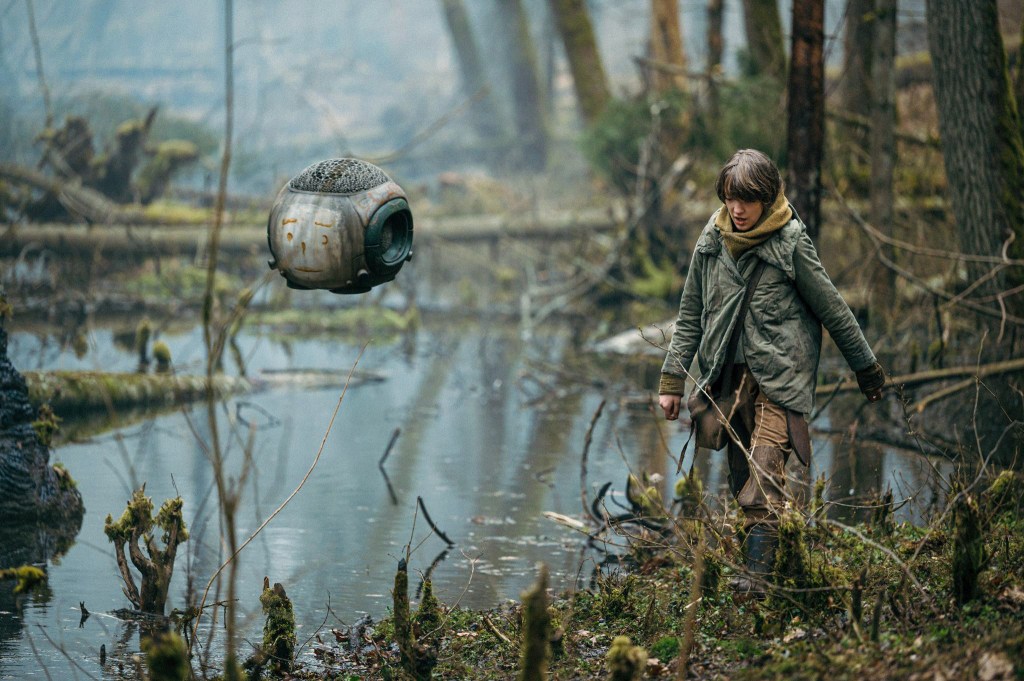 Should the apocalypse strike and any of us survive it, you can’t blame the movies for leaving us unprepared. Dystopian futures are a dime a dozen in sci-fi cinema these days, with a universally shared aesthetic leading us to expect, for better or (probably) for worse, plenty of wet, ashy mud and unflattering burlap. In a way, “Vespers” lives up to that prediction, with its soggy khaki palette and all-encompassing atmosphere of doom. In other cases, the solemn, elegant imagination of Kristina Buozyte and Bruno Samper surprises with its structured, sometimes dazzling world-building: in this vision of the earth in a state of ecosystem collapse, beauty is to be found, even if hard-won and even harder to attain is nourish.

Premiered in the main competition strand of this year’s festival in Karlovy Vary, Vesper marks the long-awaited return to feature filmmaking of Lithuanian director Buozyte and her French screenwriting partner, now co-director, Samper. A lively, original blend of cerebral sci-fi and sensual eroticism, their 2012 collaboration Vanishing Waves garnered a raving following at genre festivals as well as widespread international distribution. (In between, the pair only completed part of the drafthouse horror anthology ABCs of Death 2.)

“Vespers” delivers on the atmospheric formal promise of her previous film while simplifying the storytelling – and switches to English, although the Europudding DNA of this Lithuanian-French-Belgian co-production seems fitting for a post-national vision of the future – “Vespers”. a more accessible, youth-focused project already selected by IFC Films for release in North America. This is effectively art-house fare for young adults, benefitting youngsters with inquisitive minds and strong stomachs.

Steely 13-year-old Vesper (impressive aspiring Raffiella Chapman) certainly has both: her wits and nerves as a child largely on her own in a distant future where the planet can no longer support new plant or animal life are pretty much all that keeps them from dying. Her father Darius (Richard Brake) is frail and bedridden, though he manages to accompany Vesper in her exploits using a drone that serves as a mechanical vessel for his mind and voice; her mother recently succumbed to a virus that turns its victims into faceless, floating “pilgrims”.

Meanwhile, Darius’ brother Jonas (Eddie Marsan in an insidiously villainous way) is not an uncle to rely on. As the lord of a neighboring farm where he enslaves child laborers to harvest what little the land has left, he sets his sights on his niece’s strength and wisdom. Little does he realize their full potential, however: in a secret, seedy greenhouse, Vesper conducts ongoing experiments in synthetic biology, breeding strange, glowing new lifeforms – exquisitely rendered by the film’s visual effects team – against the odds of scorched earth.

This cruel social hierarchy exists entirely outside of the true realms of privilege in a dying world: elite, lofty citadels where wealthy oligarchs live comfortably on the fruits of advanced biotechnology, served by a manufactured class of AI humanoid beings called Jugs. Vesper has knowledge that would be of value in these isolated communities, but does not have access to them. When she meets Camellia (Rosy McEwen), the ingenious daughter of a fleeing citadel dweller, in the scrubby wilderness, she sees an opportunity to change her fortunes.

Although the film’s original screenplay, co-written by the directors with Brian Clark, appears to have drawn from a number of obvious genre ancestors – from scene to scene one could spot scattered touches of “Children of Men”, “The Road”, “The Hunger Games’ and even the video game hit ‘The Last of Us’ – the result is never entirely generic, with an unsentimental but darkly romantic spirit of risk and danger that feels as much influenced by pre-Disney literary fairy tales as it is by any science fiction . Chapman’s stoic but endearingly vulnerable performance also keeps the proceedings human and honestly tactile: where so many YA heroines are intrepid adults in child bodies, she plays the title character as a changeable, characterful child thrust into unreasonable adult responsibilities.

Still, it’s the sophisticated engineering of this desperate dystopia that chills the most here, achieved on a budget that’s probably a fraction of what’s conceded most franchise Hollywood fantasies, and yet with imaginative detail and a tactility that eludes so many of the multiplex’s soupy CGI extravaganzas. Vesper’s living laboratory of intricately shaped hybrid plants—flickering and shimmering like jellyfish, in soft fluorescent hues that sing against the autumnal rot of the surrounding landscape—is the dazzling digital coup of a film that otherwise relies on practical effects, the sombre shadowplay of Das Lensing by Feliksas Abrukauskas and the tangible wonders of production design by Ramūnas Rastauskas and Raimondas Dičius. Their sparse sets foreground the handcrafted ingenuity of people living off a barren land, and hint at the more technologically advanced world of the citadels through the ghostly tentacled structures that loom ominously on the horizon. Vespers is a sci-fi film that’s captivated by earthly survival, not elegant, cutting-edge spectacle — though it’s often just as dazzling.

In Buffalo, empty warehouses are being replaced by new apartments