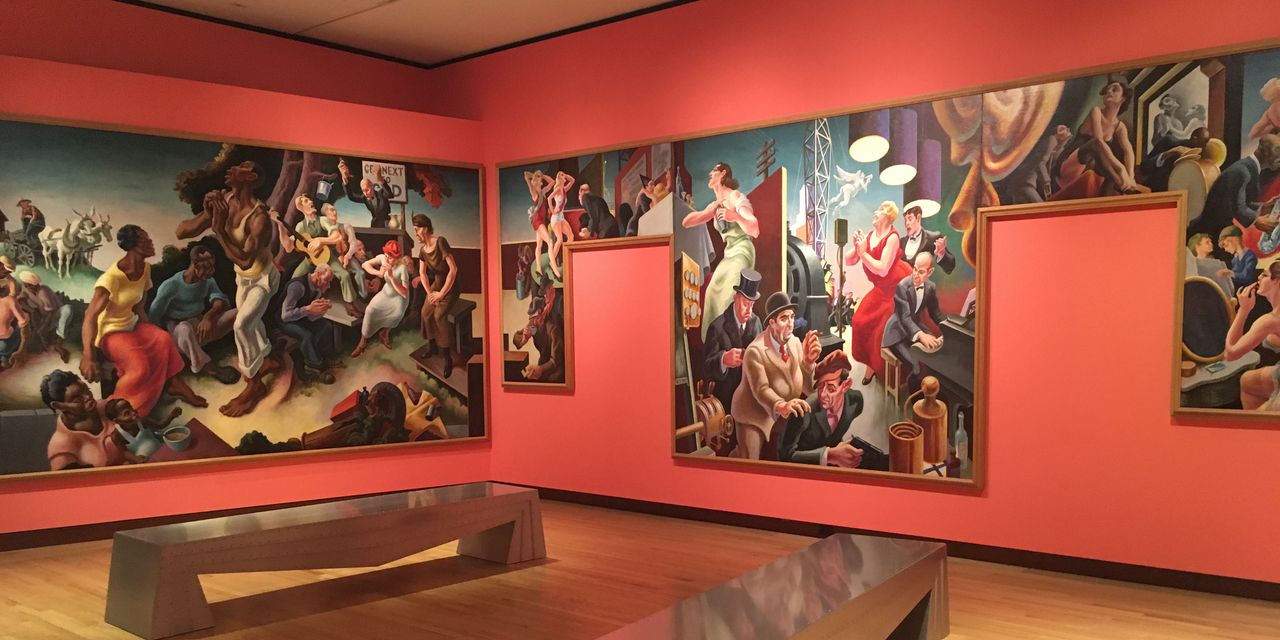 We can learn a lot from a simple preposition. Think of Thomas Hart Benton’s 1932 series of murals (egg tempera with oil glaze on linen), which he called “The Arts of Life in America,” not “The Arts of America” ​​or “The Arts in America.” He wanted to show how art – especially music and dance – defined our vibrant, heterogeneous nation as it sank into the Great Depression. He wanted to celebrate the exuberant, tender, bawdy, even vulgar ups and downs of American existence with an enthusiasm worthy of Walt Whitman.

And he did so by also paying homage to the Old Masters, notably the colors of Rubens, the serpentine figures of El Greco, and the stretches of the Italian Mannerists, all of which he had studied during his 1909 trips to Europe as a young man; and another tribute to his contemporary Diego Rivera (1886-1957), whose murals influenced him upon his return to the States.

Benton (1889-1975) and his work fell out of style when Abstract Expressionism became fashionable in the 1950s, but the wheel has turned and we can now take a fresh look at America’s greatest populist painter.

In 1932, at the height of his popularity, and while Benton was still living in Manhattan, the original Whitney Museum, located in four adjacent townhouses on West Eighth Street, commissioned the giant “Arts of Life in America” ​​murals, eight in all Departments to decorate the library walls in the apartment of Juliana Force, the museum’s director, which was part of the complex.

His subjects—people eating, singing, drinking, dancing, playing cards, making music, throwing horseshoes, praying, gambling, flirting—represent all classes and races of American life. A plaque depicts a white preacher in one corner and an impoverished black mother in another. This includes the first heap of rubbish in the history of wall painting. (Benton drew criticism for this from outraged traditionalists.) In a smaller panel, the lunette “Political Business and Intellectual Ballyhoo,” Benton cast a sardonic glance at his Greenwich Village socialist friends. Some critics found the murals crude and brash, the figures brassy and crude rather than energetic and Michelangelo. (Some of them have a cartoonish quality suggestive of Philip Guston.)

In 1949, the Whitney made plans to move to new quarters and the murals were packed away. Benton’s populist realism was considered passé. In 1953, Sandy Low, director of the New Britain Museum of American Art, paid $500 for four of the original panels and shipped them to Connecticut. A smaller fifth section – the bezel – was added later.

In New Britain they fill an entire room, on opulent salmon-colored walls that will soon be repainted in a more muted shade of blue-grey. The figures erupt, swirling in sculptural groupings and in vignettes that suggest allegory. Energy and tenderness, vitality and desperation go hand in hand. Violence and sadness are never far away (after all, this is depression), both as a subject and in the painter’s technique: his vivid primary colors, sometimes deliberately garish, and his distortions of the human figure are dizzying.

The three richest and largest panels are geographically identified: Arts of the South, Arts of the City (mostly, one deduces, New York) and Arts of the West. (A fourth is called “Indian Arts.”) Here is America’s fullness: animated, playful, desperate, compassionate, odd. In an essay on this work, Benton wrote that his chosen arts were popular, “undisciplined” and “entered into pure, unreflective play”. That was her appeal to him. His own discipline and genius found a way to envision such a game, working within the confines of space (“Arts of the City” occupied a wall at the Whitney with two French doors in it), and populating a space with so much enthusiasm as Michelangelo populating a ceiling.

A viewer can step back and view the entire panel, or zoom in and focus on the individual characters and cameos. In Arts of the City, for example, a trio of menacing figures take center stage: a fat banker in a top hat behind a cigarette-smoking guy in a bowler hat, his hand resting lightly on the shoulder of a gun-wielding thug. It is perhaps an allegory of criminal capitalism in three steps, from investment to theft. Elsewhere there are bathing beauties, radio singers, farriers, people who deal with intimacy and outright sexual assault. Easy to miss on the left: a man looking into a garbage can.

“Arts of the South,” with its controversial rubbish heap and outbuilding next to a rural church in the top left, also features a fire-and-brimstone preacher like Sinclair Lewis’ Elmer Gantry in the top right in front of a sign that reads “Go to God Next.” A black mother and her daughter occupy the lower left side. The child holds a soup bowl in one hand and a dandelion in the other (symbol of dreams? of transience?). Her stomach is bloated – a sign of malnutrition. Is hope delusion? Who can tell?

Benton was an accomplished ethnomusicologist and harmonica player. (He recorded for Decca Records.) He knew the music he was portraying, and in the swirls of color in “Indian Arts,” he attempted to reproduce the pulsing rhythms of his central tribal dancer almost synesthetically.

He also used friends and family as models, including one – his studio assistant – whom he gave daily instructions to finish his paints and prepare his canvas. This young man appears in the lower left corner of “Arts of the West” as a harmonica-playing character in blue overalls. His name was Jackson Pollock.

-Mister. Spiegelman writes about books and art for the Journal.