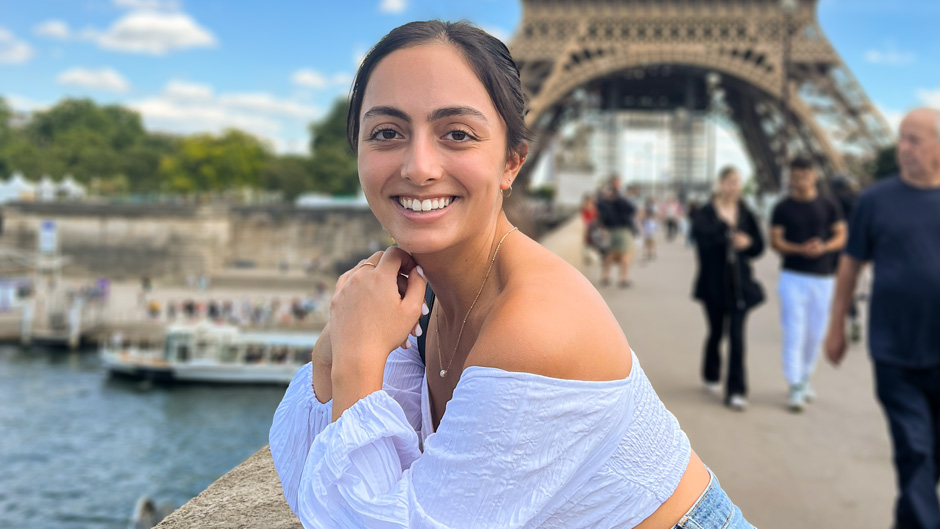 The student spends the summer exploring France and learning the language

As part of the Study Abroad program, Frost School of Music student Nicole Perez gained Parisian experience by living in the city and visiting cities where she practiced her French with locals.


University of Miami senior Nicole Perez spent the first two months of her summer studies in Paris, France at the American University of Paris (AUP), where she brushed up on her language skills and got the opportunity to explore cities and towns outside of the major Metropolis.

Perez, a Miami native and a music composer major at Frost School of Music, also had the opportunity to explore the music scene in the City of Light.

In the following question-and-answer interview, she discusses her study abroad experience.

What attracted you to this program?

I had been to Paris before but couldn’t stay very long. It’s such a beautiful city that has so much to offer. So I thought it would be a great place to study.

Where did you live?

Paris is divided into districts called arrondissements, numbered 1 to 20. I lived in the 16th arrondissement in a one bedroom apartment. Luckily, I didn’t have to look for an apartment as I used the accommodations offered by the American University of Paris, which was an off-campus apartment building. Each student had his own studio.

What did you study and why did you choose these subjects?

While in Paris, I took two French courses that I was able to apply to from a relative at the University of Miami. The French classes I took were very intense; they were four hours a day from Monday to Friday, and my professors only spoke French. They were also very insistent. My classmates and I not only learned the language, but also learned about French culture. Our program included trips to various Parisian suburbs such as Saint-Germain-en-Laye, Nogent-sur-Marne, Rueil-Malmaison and Fontainebleau, where we practiced our French with locals and explored the cities together.

What surprised you about life in France?

I was pleasantly surprised at how efficient public transport was. The subway was a great way to get around the city. I was also surprised at how peaceful Paris can be. There were many beautiful parks that are so quiet and relaxing that I forgot I even live in a big city.

Did you know the language beforehand? Or did you learn something there?

About six months before I went to Paris, I started learning French with the Duolingo software application. I speak Spanish and it helped me learn it very quickly, but my French classes in Paris really made a difference. At the end of my studies abroad, I noticed a big change in my ability to speak French. I could order food from restaurants, talk to locals, and ask for directions with ease. When I arrived I wasn’t able to do these things very well.

What was your best experience?

I don’t think I could choose one! I have met so many amazing people from all over the world who have changed the way I look at many different aspects of life. Meeting these people and learning about their cultures and life experiences inspired me. This experience also gave me the opportunity to get to know myself better. I’ve learned the importance of living outside my comfort zone, and I’ve also had a great time drinking hot chocolate at Les Deux Magots, attending concerts and music festivals, and dancing in Parisian jazz clubs.

Would you recommend the program?

How does this experience fit with your goals at the university?

I am an aspiring music supervisor and an important aspect of a music supervisor’s job is selecting music to be used in various media such as films, television and commercials. During my trip I learned a lot about French music and had the opportunity to visit several concerts and festivals where I discovered many talented European artists that I had never heard of before. Immersing myself in this environment broadened my taste in music and allowed me to explore new possibilities for music placement in media that I may do in the future.

This experience also gave me the opportunity to improve my communication skills. I learned another language that I can use to communicate with more people. And I think no matter what you study or what field you work in, communication is paramount.

To learn more about studying abroad at the University of Miami, visit the Study Abroad Office websiteor visit one Study abroad 101 Information event.