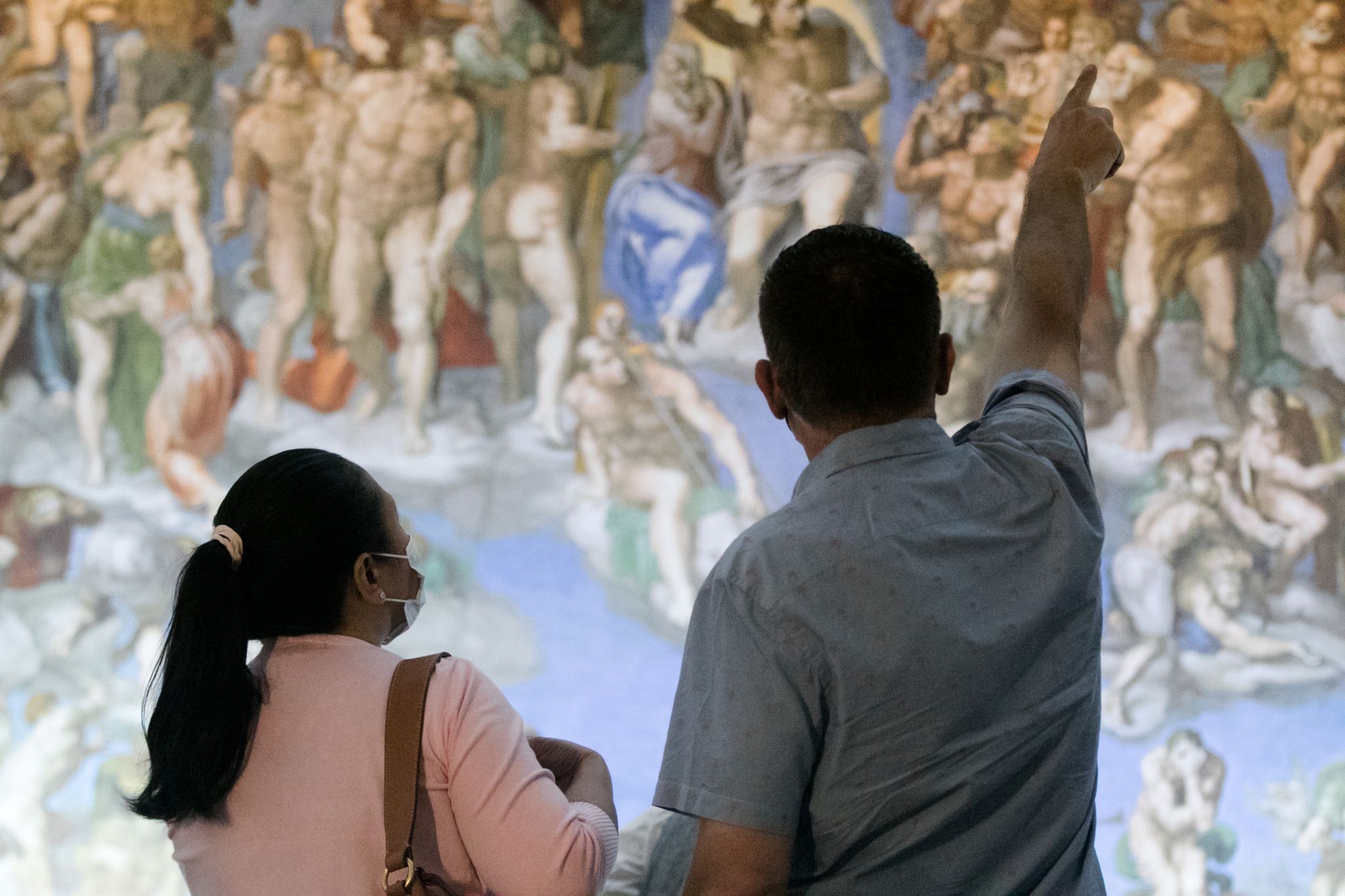 The first thing you see in the new art exhibition in St. Mary’s Cathedral is a heavily drunk biblical figure.

This fresco, entitled “The Drunkenness of Noah”, is the introductory panel of Michelangelo’s masterpiece, which he carefully painted on the ceiling of the Sistine Chapel in Rome. It shows Noah naked and asleep after drinking too much wine while his sons mock him for his indulgence. The scene is faithfully recreated, printed on fabric draped on panels arranged in a large multipurpose room in the Cathedral of the Assumption of the Virgin on Gough Street. But instead of 68 feet in the air, the panels are only displayed 10 feet above the ground, which allows for a much more detailed view of the artwork.

When visiting the cathedral on the opening day, a few dozen people waited outside the church for the opportunity to experience this iconic religious art without spending hundreds of dollars on a flight to Rome (tickets cost $ 20). The exhibition was inspired by a trip that the organizer of the exhibition took to the Vatican a few years ago.

“Like every other tourist in Rome, I was there,” said Martin Biallas, CEO of SEE Global Entertainment. “And of course there were long lines. 2,000 people at the same time in an area of ​​10,000 square meters. You have 15 minutes to get through there and then you will be kicked out. When I went out I thought, yes, I saw the originals. But the situation and the experience weren’t that great. “

Two years later, in 2015, the first Sistine Chapel exhibition opened in Montreal. Now the company has nine sets of the works of art on a world tour, from Vienna, Austria, to Chengdu, China, to Tacoma, Washington. The portable nature of the installation, which only takes two days to install and one to dismantle, allows it to show up in smaller towns at lower ticket prices, which would otherwise be an expensive pilgrimage to the actual church (and one with photos) democratised are not allowed).

The artworks on display were created using high-resolution images captured by a Japanese television station that funded a restoration of the chapel’s ceiling in the early 1980s in exchange for the space’s film and photo rights.

In person, the close-up view of the printed panels looks vividly detailed, but not overly high-resolution. An audio guide provides detailed descriptions of each panel with biblical and artistic context. If you listen to the full audio guide, the experience will last anywhere from 60 to 90 minutes.

On my own visit to the Vatican over a decade ago, I remember being overwhelmed by the magnificence of the chapel, but also feeling incredibly claustrophobic in the sea of ​​other tourists. I lacked the experience of casually strolling through the exhibition in St. Mary’s, neither. It was easier to pick up the details of the paintings, but removing the art from one of the most impressive churches in the world takes away a lot of its resonance.

While the actual Sistine Chapel is breathtaking regardless of personal beliefs, for me the San Francisco installation lacks that universal artistic appeal. The reproductions are of high quality, but you will still see prints that lack the structural elements captured in original works from the same period. If you’re interested in Renaissance art, the Legion of Honor is probably a better way to spend an afternoon.

However, as far as the educational religious experiences are concerned, this offers something special. The audio guide, perhaps too preoccupied with biblical history for those who prefer self-guided museum visits, really brings the paintings to life. While there is no substitute for seeing the real Sistine Chapel, it will still be a powerful religious experience for many – just one that is much closer to home.

Olaf Scholz is a winner, but not a Chancellor – not yet.