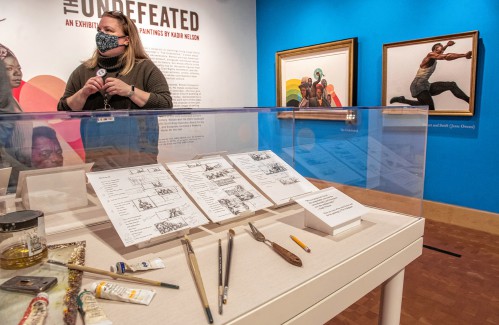 The Recorder – Standing and Proud: Exhibition at the Eric Carle Museum pays tribute to African Americans

It started with a poem, an ode to African Americans and their courage and determination to build a meaningful life in a nation that put all odds against them.

Then it became an award-winning children’s book, The Undefeated, which combined the words of Kwame Alexander with the paintings of Kadir Nelson to tell this story of black resilience in a graphic format.

Now it’s a Exhibit, a full exhibition of Nelsonâ€™s original paintings that help celebrate the work of African American activists, artists, athletes, and everyday people who have made deep contributions to American culture and history – ideally, they bring hope to the next generation of young Blacks.

“The Undefeated” at the Eric Carle Museum of Picture Book Art in Amherst shows 16 large oil paintings from the book of the same name from 2019, which won three of the most prestigious awards for children’s literature: a Caldecott medal, the Coretta Scott King Illustrator Award (for Nelson’s painting) and Newbery Honor (for Alexander’s text).

“The Undefeated” is the second full exhibition of Nelson’s work that Carle has installed; The museum previously displayed its paintings of famous players from the Negro Leagues of baseball. Nelson’s work has also been part of a number of group exhibitions at the museum in recent years.

Nelson is a celebrated artist and writer of children’s books in California, whose work has featured in several museum collections and on US commemorative postage stamps. His artwork has also featured on the covers of 16 New York magazines. He paints in a rich, atmospheric style reminiscent of the works of old European masters as well as iconic American artists such as Edward Hopper.

His portraits in â€œThe Undefeatedâ€ are also noticeable because he created almost all of them against a plain white background. These paintings feature some of the most famous African American characters in history: Martin Luther King, Jr., Jesse Owens, Frederick Douglass, Duke Ellington, Serena Williams, Muhammad Ali, Ella Fitzgerald.

Ordinary people are also part of the tale, including a black family of five dressed in early 20th century clothing. with all necessary means. “

Courtney Waring, the Carle Museum’s director of education, says she was particularly impressed with the way Nelson linked his images with Alexander’s words to reveal a narrative that links the past and the present, with references to the transatlantic Slave trade through the civil rights era to the Black Lives Matter movement.

â€œThe way these words and images come together creates such a strong story,â€ she said recently while touring the exhibition.

The painting on the first page of the book shows, for example, Jesse Owens, the athletics star who won four gold medals at the 1936 Olympic Games in Berlin, right in the middle of the long jump at the Games. Alexander’s poem begins with the words â€œThis is for the unforgettable. / The fast and sweet ones / who have overcome history / and opened a world / of the possible. “

Another painting commemorates African Americans who fought on the side of the Union during the Civil War – the soldiers who, as Alexander writes in his poem, â€œthe red, white and Tired blues / on the battlefield / to save an imperfect union. “

Although she likes all of Nelson’s work, Waring, an art historian at college, says she was especially chosen by a group of mostly African-American artists of the 20th century Aaron Douglas, a renowned Harlem Renaissance painter.

â€œI like the way very much [Nelson] added that touch here, â€said Waring.

Alongside paintings that people celebrate are those who acknowledge the victims of racism and segregation. In a line from Alexander’s poem – “This is for the Unspeakable” – Nelson offers a picture of four young black girls who were killed in a civil rights bomb attack on a church in Birmingham, Alabama. Portraits of the four girls are shown in framed photographs with broken glass.

Nelson’s only abstract image in “The Undefeated” is a powerful one, consisting of dozen of naked black bodies, lined up like sardines in close rows, based on the transatlantic slave trade. According to some estimates, well over 15% of people captured in Africa and brought to North and South America died en route on slave ships due to the infernal conditions.

Ultimately, however, both Alexander’s poem and Nelson’s pictures offer a positive message. A painting taken from the last two pages of the book shows the faces of several smiling black children.

In an afterword to the book, Alexander, who is also a children’s author, says that he began writing his poem in 2008 as a tribute to his new daughter Samayah and to Barack Obama after his election as president. He wanted to record the story that led the country “to that historic moment,” he writes, and “remind Samayah and her friends and family and all of you to remind me never to give up.”

Nelson, for his part, added birds and butterflies to some of the paintings on the last pages of “The Undefeated”. As he said at an awards ceremony for the book last year, these flying creatures act as both a “visual device” to advance the story and to “bring the spirit of African American people, the spirit of excellence, resistance, beauty, pride, Love and the universe. “

â€œThat’s one of the things I like the most [about the exhibit], the way it gives children hope that things can change, that there can be a better future, â€said Waring.

In addition to Nelson’s paintings, the Carle exhibition shows some of the artist’s early drawings, including one of Mr. Spock, the character from the Star Trek series at the age of 9, and another by basketball legend Michael Jordan. There is also a reading area in the gallery with Nelson-illustrated books as well as children’s books about many of the people featured in the exhibition paintings.

For more information on The Undefeated and the Eric Carle Museum, visit carlemuseum.org.

Steve Pfarrer can be reached at spfarrer@gazettenet.com.