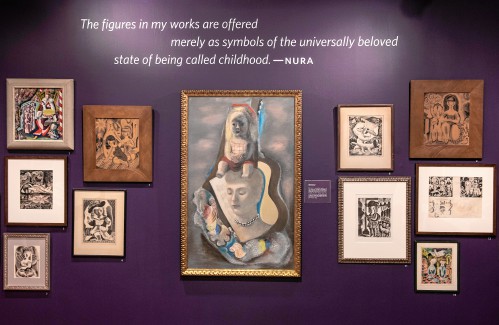 The Eric Carle Museum of Picture Book Art has exhibited the work of a wide variety of artists over the years, some better known than others.

Nura Woodson Ulreich is probably one of the lesser known. As Ellen Keiter, the Carle’s chief curator, notes, Ulreich “quite dropped from the scene” after her death in 1950 at the age of 51, despite being a celebrated and successful artist at the time.

But the American painter, graphic artist, and children’s book author, better known as “Nura,” is now enjoying her first public reintroduction in about 70 years. Finding Nura: Rediscovering an American Modernist from the Kendra and Allan Daniel Collection, a new exhibition at the Carle Museum, features a series of works that showcase her Art Deco modernist approaches to art, particularly her colorful, stylized portraits of children reflecting roughly equal parts innocence, mystery and surrealism.

In fact, the exhibition’s guest curator, Nicholas B. Clark, titled his accompaniment essay Nura and the Mystery of Childhood, noting that much of her work demonstrated a “commitment to capturing the theme of a child’s imaginative life, sprung from their own childhood experiences and dreams.”

“What’s interesting about that? [her children’s portraits] is that you almost never see a grown-up character,” says Keiter. “It’s very much a children’s world … And she gave them a very distinctive look with round faces, almond-shaped eyes and small mouths and also a kind of detachment.”

For example, in At Home, a watercolor painted between 1929 and 1932, a young girl with Taylor Swift bangs and a doll-like face looks up from a book in her lap to stare blankly at the viewer; next to her are a dog and a cat modeled on children’s models. The painting offers its fair share of odd, Cubist angles and proportions, reflecting what Clark in his exhibition notes calls Nura’s “commitment to stylization and pattern.”

More broadly, as Clark puts it, the artist’s paintings “capture the essence of childhood, infusing it with empathy without being overly sentimental. … The characters are clearly hers, but not from a real child. Nura’s art expresses a state of being rather than a statement of reality.”

Clark, a former director and chief curator of The Carle, who now lives in Cambridge, said in a phone call that Nura and her husband, Hungarian-born artist Edward Buk Ulreich, had decided not to have children, “she experienced children vicariously , if you want, through their work.”

One of the most intriguing paintings in the exhibition, Self-portrait, touches on this. The oil-on-masonite work focuses on the head and neck of a woman with her eyes closed – suspected to be Nura, Clark says – framed against an image of a guitar (Nura was an accomplished guitarist) and some sheet music is. A child with round eyes sits on the woman’s head, looking straight at the viewer; a cluster of shells and tiny flowers float at the bottom of the painting.

Born in Kansas City in 1899, Nura studied art there, in New York at the Art Student’s League and then in Chicago, where she met her future husband. The couple lived in Paris in the mid-1920s and later in Vienna, where Nura began to absorb modernist styles of art, which she later made a hallmark of her work when she and Buk settled in New York in the late 1920s.

Both artists received critical acclaim and placed work in major museums and private collections, although the Great Depression did not make things easy. In order to make ends meet, Nura started illustrating children’s books in the 1930s and later also wrote them, says Keiter. Her very first book, Stories, dispensed with text and featured blank pages alongside her lithographic images, inviting readers to create their own stories.

Nura’s penultimate book, The Mitty Children Fix Things, from 1946, received strong reviews, Clark notes, from two major New York publications, the New York Herald Tribune and The Saturday Review, among others. Her last book, The Kitten Who Listened, was picked up by a major publisher, Harper & Brothers, a forerunner of today’s HarperCollins.

But although her career was flourishing, Nura died in 1950 after an ongoing illness, and Clark says that the rise of abstract expressionism in the art world of the 1950s, likely combined with the lower esteem in which many women artists were generally held, meant that her art “just disappeared from view really pretty quickly.”

Renewed focus on Nura’s portfolio comes from art dealer and collector Kendra Daniel, who, along with her husband Allan, has extensive and diverse art holdings. The couple, who split their time between New Jersey and a home in the Hilltowns, have donated more than 500 artworks to the Carle, Keiter says, and Kendra Daniel also sits on the museum’s collections committee.

As Clark notes, Kendra Daniel has long had an interest in forgotten early 20th-century women artists, particularly illustrations for children. When Daniel discovered one of Nura’s paintings, The Fishboy, in an antique shop about 30 years ago, she became intrigued and began to learn more about the artist, and she and her husband ended up buying much of her art from Nura’s estate. (The unframed “Fish Boy” as Daniel found it is part of the show.)

“I was attracted by the modernist style reflected in the rich colors and bold composition; the painting became the basis of our Nura collection,” says Daniel in Clark’s essay on The Fish Boy. “I was even more intrigued when I discovered that Nura had written and illustrated eight children’s books between 1932 and 1950. … We are proud to introduce Nura to the public with these stunning works of art.”

Clark says he knew very little about Nura before he started putting together the new exhibit. Now, having researched her career, spoken to her husband’s descendants, and found many old press accounts of her work, he’s a fan: “I hope this exhibition will spark interest in her fascinating career.”

The sequel at the Carle Museum through June 12 is I Could Do That! The Picture Book Art of Ed Emberley,” a show that focused on the prolific Massachusetts children’s illustrator and author, whose career dates back to the 1960s (he’s 90 now).

Emberley, a native of Malden and now based in Ipswich, won a Caldecott Medal for his illustrations in the 1967 book Drummer Hoff, written by his wife Barbara. In the 1970s and 1980s he created a popular line of children’s drawing books that showed them how to turn basic shapes and designs – even thumbprints – into more creative illustrations.

“I used these books all the time growing up,” says Carle curator Keiter.

But Emberley, whose work spans a range of mediums including printmaking, also brings incredible detail to much of his work, such as the carefully crafted lines of his drawings in another early book, One Wide River to Cross of 1966. His books also utilize innovative touches such as stencils, die cuts, optical illusions, clip art and more.

The exhibit includes sketches, handcrafted book mockups, and other materials that provide additional insight into the work of what Carle calls “one of America’s most versatile picture book illustrators.”

For more information on these two exhibits, see carlemuseum.org.

Steve Pfarrer can be reached at spfarrer@gazettenet.com.