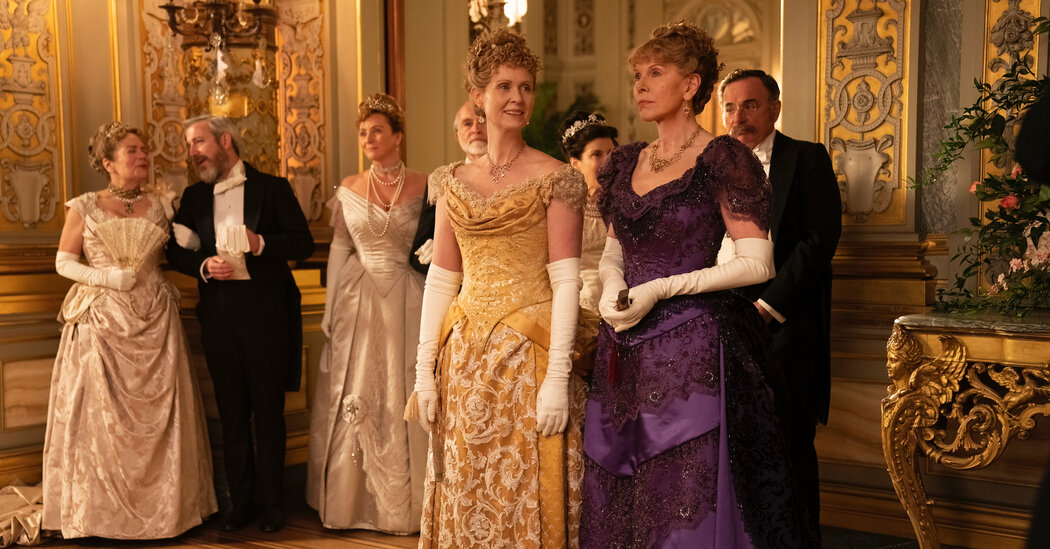 Julian Fellowes followed his new series The Gilded Age for a decade. Call it his white whale. Beginning Monday on HBO, you can watch him and a huge, talented cast take to the waves.

What would later become The Gilded Age began in 2012 as Fellowes’ idea for a prequel to his Downton Abbey, the top-down British costume drama that was a smash hit for PBS in the United States. Downton’s early years were a slick, charming mix of family melodrama and pastoral comedy, but over the course of six seasons the charm faded and the artifice grew, and by the time the series ended in 2015, the idea of ​​a spin-off had lost some of its luster .

However, Fellowes persisted even as he wrote other series, such as the highly entertaining Georgian drama Belgravia (2020). The Gilded Age hung around, switched channels (from NBC to HBO), and faced a pandemic delay when filming finally began. After all this time, it’s sad to report that the show, while no longer a “Downton” prequel, looks like a looser and more superficial rehash of character types and situations familiar from the earlier series. (Five episodes out of nine were available.) Maybe the whole time had something to do with it.

Set in New York in 1882 (about 30 years after “Moby-Dick” was published there), the series begins with a New Money family, the Russells, in their Stanford White-designed mansion on Fifth Avenue across the street Street-side move into the less luxurious but more respectable home of old-money sisters Agnes van Rhijn (Christine Baranski) and Ada Brook (Cynthia Nixon).

George Russell (Morgan Spector) is a railroad tycoon and Vanderbilt-style robber baron, and his wife Bertha (Carrie Coon) is passionate about breaking her way into New York society. Your arriviste status will appear immediately with the appearance of wagons with crates containing statues, presumably looted from European homes and churches.

This is Henry James and Edith Wharton territory, and Fellowes shies away from comparisons. A scene set at the Academy of Music, once New York’s premier opera house, evokes Wharton’s The Age of Innocence directly; A scene in which a mercenary is sent home is taken directly from James’ Washington Square and its theatrical adaptation The Heiress by Ruth and Augustus Goetz.

And there’s a naïve, Marian Brook (Louisa Jacobson), Agnes and Ada’s niece, who recalls many young women in James and Wharton’s novels, although she is neither as innocent, nor as tragic, nor as compelling as those models. She arrives at her aunts’ house to serve as the audience’s surrogate and to provide a romantic interest as a counterpoint to the genteel but brutal social and economic warfare that makes up the central story. Through highly unlikely circumstances, she also brings with her an aspiring writer, Peggy Scott (Denée Benton), a young black woman who becomes Agnes’ secretary and allows Fellowes to blend class and gender with race in his portrayal of 19th-century New York to consider.

It’s a muddled and sloppy portrait, however – a thin gloss on its superior sources that consistently dips into caricature. Fellowes’ heart doesn’t seem to have been in it; certainly not his ear: “You own the future, men like Mr. Russell,” we are told, and “You are a New Yorker now… and for a New Yorker anything is possible,” and on the other hand, “You. You.” belong to old New York, my dear, and let no one tell you otherwise!”

The hackneyed dialogue matches the largely monotonous characterizations, most egregiously seen in narrow-minded widow Agnes, who seems to have no thoughts other than her dislike of the nouveau riche. In general, the conservatism and provincialism of the old guard is so exaggerated and presented with so little context that society’s women seem like they’re from outer space and the actresses who play them can’t do much to humanize them.

One of Downton’s successes, of course, was the excellence of its cast, many of whom were not previously well known in the United States. HBO has assembled a more prominent cast for The Gilded Age, but most of the actors fall victim to the obviousness of the material. Baranski’s usual brilliance is muted; She’s the designated zinger purveyor, like Maggie Smith in “Downton,” but the impact isn’t there. Nixon tries hard but can’t find anything consistent to play with in Ada, who’s always on the verge of a hysterical maiden caricature. Bertha is a slightly more rounded character – the story is generally more sympathetic to the people of the future – but her murky rise in society isn’t much more interesting than Agnes’ snobbery, and Coon seems as uncomfortable as her castmates. Other cast members go straight to heist, like Nathan Lane as social referee Ward McAllister.

There is plenty of on-screen talent, however, and some cast members are signing on for smaller roles. Kelli O’Hara is good as a society wife desperate to bridge the gap between old and new. Audra McDonald conveys strength and compassion as Peggy’s concerned mother. And Sullivan Jones brings the show to life with a brief appearance as the editor of a black newspaper that publishes Peggy’s lyrics.

In Downton, Fellowes managed to switch off the larger world and anchor his story in the daily rhythms of a family and estate. In “The Gilded Age” he lets the world in, and yet everything seems smaller. The domestics go through the same soap opera moves we enjoyed on Downton, but feel superfluous to the story; New York’s social circle is called 400, but here it feels more like 12 or 15. And while the costumes and interiors are lavish, the streetscapes of Fifth Avenue are now computer-graphics open-air constructions—you don’t even understand the mansion’s authentic grandeur. As the Countess of Grantham said, things are different in America.

“Joseph Mary Plunkett is my great-uncle. How more Irish am I supposed to be?’