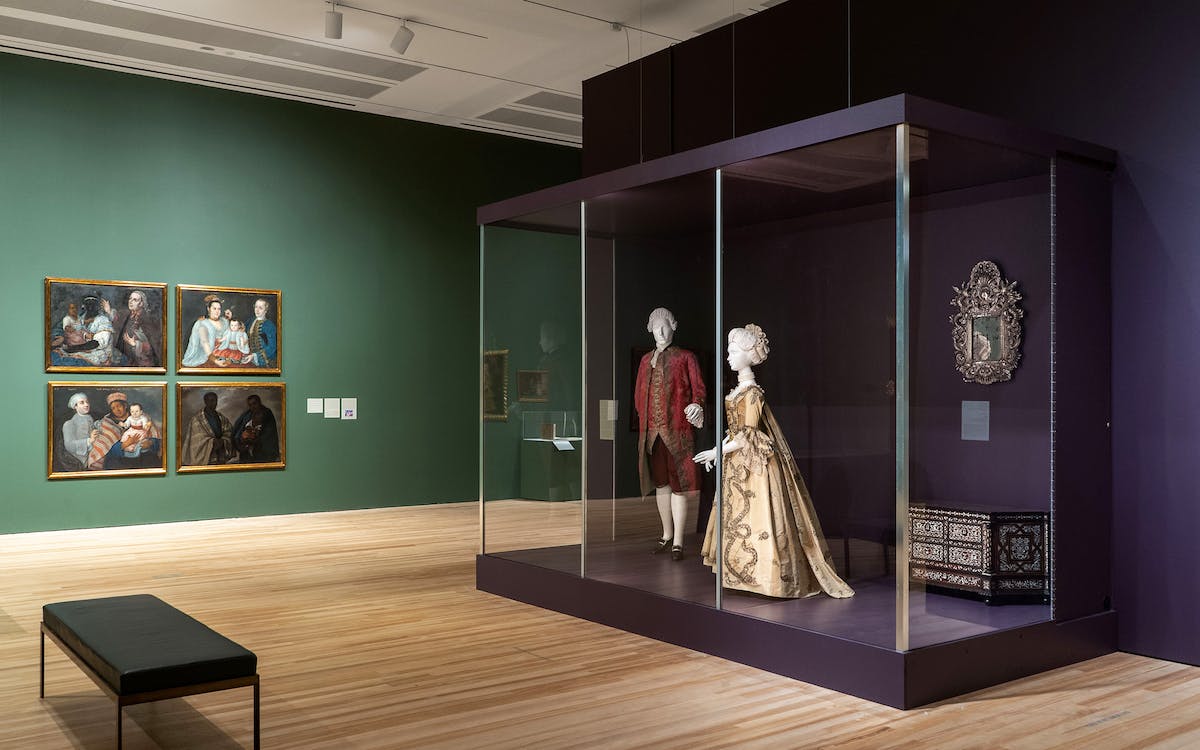 Outside a grand colonial cathedral in el Zócalo, Mexico City’s historic center, you’ll find men in feathered headdresses and beaded robes performing pre-Hispanic spiritual cleansing on tourists and unlucky locals. The Catholic Church directly behind them occupies the site of a 14th-century Aztec pyramid that once featured four inclined terraces and two shrines. Despite the tangled history of the two belief systems, they now co-exist on the court; It is not uncommon for a churchgoer to sign the cross when going to a healer for fifteen minutes of herbs and incense “Limpia.”

Much of Mexico, where I’ve lived for the last four years, is like this, a mix of Spanish and indigenous traditions resulting in a constant reminder of the country’s colonial past. In recent years, outside of Mexico and the rest of Latin America, there has been a growing interest in understanding how the arrival of the Spanish more than 500 years ago shaped the region – and continues to shape it today. In response, museums such as the Dallas Museum of Art and the Museum of Fine Arts, Houston, have increased their Latin American departments. The University of Texas at Austin’s Blanton Museum of Art now employs a curator, Rosario Granados-Salinas, who specializes in art from Spanish America and has worked as an assistant curator at the Museo de la Basílica de Guadalupe in Mexico City. Since 2019, she has been working to build a collection of colonial-era works, many of which will be presented in a new exhibition entitled “Painted Cloth: Fashion and Ritual in Colonial Latin America.”

The exhibition, which runs from August 14th to January 8th, consists of more than seventy paintings, sculptures, pieces of furniture and clothing made in Bolivia, Mexico, Peru and Venezuela in the 16th and 17th centuries and are grouped to explore the colonial era through the lens of fashion and fabric. The decision to use fashion as a gateway to the era was a calculated one. Granados-Salinas hopes the focus on garments will appeal to a broad audience, not just art lovers, historians, or Catholics or Latinos. “It’s a very timely way of thinking about the complicated history of colonialism, race, class and gender,” she said.

Before arriving at the Blanton, I doubted the amount of information about gender or racial dynamics I could glean from European-inspired shoe buckles or paintings of tailors and seamstresses making Italian lace. But as I walked through the museum and spoke to Granados-Salinas, I realized that the garments are an accessible entry point for people like me who usually go on autopilot when looking at religious paintings.

ecstasy of Mary Magdalene, made in Cuzco, Peru, in the eighteenth century, depicts the saint in a state of adoration. I knew from my childhood Catholicism class that she had a bad reputation as a sinner being consumed by “seven demons.” Although the exact story of the saint is disputed – some theologians claim Mary Magdalene was a sex worker – she is known to some Catholic worshipers for having been saved through devotion, prayer and penance.

In the painting on display, she is surrounded by a forest and lies on the ground, supported by two angels. The first thing that struck me when I looked at the piece was, as intended, a white veil framing the woman and the angels. According to the exhibition’s catalogue, Mary Magdalene paintings like this one were pretty hot commodities in the 17th century. Granados-Salinas suspects that the demand came mostly from women, some of whom may have longed for a chance to enter the Pearly Gates after losing their virginity from marriage. “I imagine that the veil is a very subtle reference to regaining virginity through prayer,” Granados-Salinas said. “I think it’s a female audience asking about this object – devotion to these saints was a way of empowering women.” The hidden message in the painting was compelling.

The meaning behind other paintings felt simpler. A Mexico City from the mid-18th century occupation Oil painting intended to educate Spaniards about the diversity of people in America, showing different racial and ethnic categories as well as the types of clothing everyone should wear. (Wealthy indigenous women who married Spanish women were expected to wear more voluptuous huipiles, traditional loose-fitting tunics, while a half-white, half-black woman was required to wear Spanish-style petticoats, skirts, and blouses.) If some people attempted to trick the system by wearing clothing outside of their “rank,” Mexico City authorities responded with the 1582 ordinance making it illegal for women of Hispanic or African descent to wear native clothing unless they were married to an indigenous man. The punishment was severe. The Spaniards threatened arrest, imprisonment, a hundred public lashes and a fine.

During my preview of the exhibition, I reflected on what women of the time were thinking and feeling in a way I never had when I was learning about the colonial era at school. This is exactly what Granados-Salinas intended. With the occupation In painting in particular, she wants viewers to go beyond what she sees as a superficial understanding that intent to classify and categorize people is racist. “I think we can’t see the issues as documents of terrible practices, but also to make it clear that race is something much more fluid,” she said.

The desire for the artwork to inspire more than passing interest was a theme both in the exhibition and in my conversations with the curator. She hopes the works will stimulate deeper conversations about colonization. “We were colonized, yes. But maybe we were really colonized by the narratives of what the conquest meant,” she said, acknowledging that she cannot speak for the indigenous communities.

in the Conversion of an indigenous noble through the intercession of Our Lady of Copacabana (artist unknown), an early 17th-century painting from Cuzco, of an indigenous man wearing fine clothing, including a brightly colored, fringes uncu, a knee-length tunic often made of cotton and wool-like yarn. The intricate garment alerts viewers that he is an important figure in his community. With folded hands and lowered eyes, the man kneels before two monks in black robes. It’s the kind of image I’ve seen in colonization textbooks since I was in elementary school. It’s long been clear that the friars are subjugating the man, but Granados-Salinas wonders if there might be another possibility: what if the man is a “humble newcomer excited to be supported” with Catholicism ? “That space of doubt, of the possibility that it’s those two, is where I think we can really start a conversation about what the colonial era is,” Granados-Salinas said.

This is a thorny issue, especially in the United States. Here the atrocities committed by the Spaniards in their quest for colonial dominance and for gold and land are widely recognized. They invaded wealthy cities like that Aztec Tenochtitlán, cooptation of the capital and renaming it Mexico City. Along the way, they brought diseases like smallpox to America, introduced forced labor and slavery, and violently repressed the natives, killing millions of people. In recent years, some states in the US, including several Texas cities, have publicly acknowledged this story by replacing Columbus Day with Indigenous Peoples Day. However, Granados-Salinas points out that at times the response to colonialism was different in Latin America, where some aspects of Spanish traditions are fully embraced.

For example, Latin Americans are predominantly Catholic. In Mexico, about 70 percent of the population practices the religion. “People in Mexico, but also in Peru, Guatemala and other countries in Latin America are very proud of their Catholic background,” said Granados-Salinas. “You can’t just erase that [by] saying, “Oh, that’s how you were dominated and will continue to be dominated.” ”

By the way, while living in Mexico, I’ve seen that some locals, like visitors to the Cathedral, are looking for those too limpias, have found ways to proudly blend indigenous and Spanish traditions. There are very vibrant and visible indigenous communities; When I walk the streets of Chiapas or Oaxaca, I not only hear Spanish – I also discover indigenous dialects. (There is 68 indigenous groups in Mexicoand approximately seven million people speak their native language.) I worry that the predominantly US audience who attend the Blanton without that context isn’t ready for such a nuanced conversation about colonialism.

I left Blanton wondering if someone with no roots in Latin America would be able to fully appreciate the complexities of colonialism in the region through the artworks on display alone, but Granados-Salinas believes it’s worth a try. She told me that there are consequences to seeing Latin Americans as defeated people. It’s a trauma, she says, that’s passed down through the generations. “Do we want to keep being colonized by saying, ‘Oh, we were the vanquished?’ Or can we change that and say, ‘That was an invasion?’ She asked. “We weren’t defeated. This exhibition is a way of thinking differently. It’s a way of reclamation.”