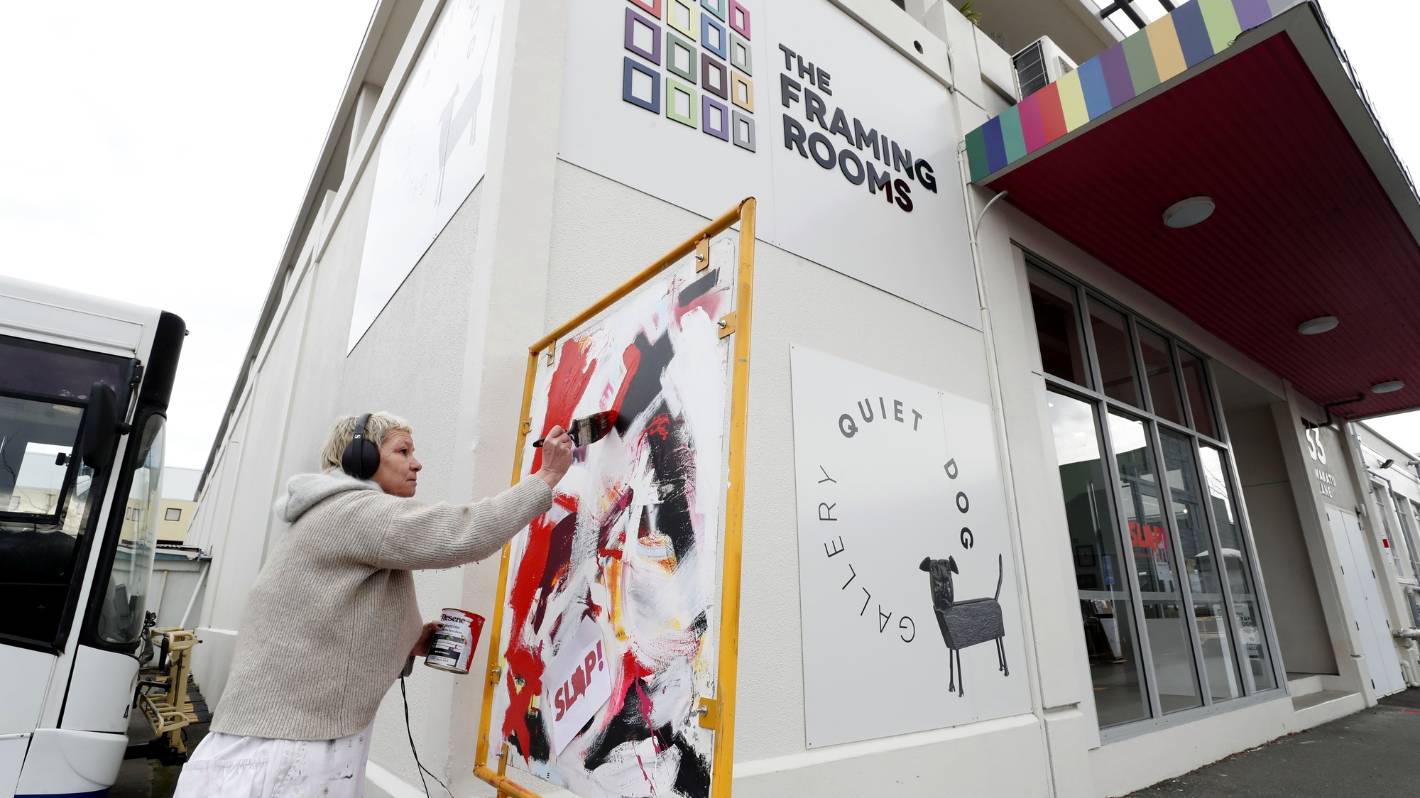 As part of her solo exhibition SLAP! at the Quiet Dog Gallery in Nelson.

A worn sign in a Nelson parking lot has been redesigned inspired by street art.

The artist Ann Braunsteiner presents her solo exhibition, HIT!, at the Quiet Dog Gallery from August 13 to September 10.

As part of HIT!, The artist painted the Bus Exchange sign in the Whakatū car park in her signature multi-layered style.

And while some artists might worry about taggers damaging their work, Braunsteiner said she welcomes any potential graffiti — saying it’s all part of the street art medium she loves.

Braunsteiner started painting the sign on Sunday. Usually the artist paints on a canvas on the floor – so the iron shield standing up was a challenge.

“When I splatter paint, it’s hard not to get on the bus or the building.”

Influenced by street artists such as Jean-Michel Basquiat, the artist’s work is reminiscent of the unauthorized, dangerous street art of the 1980s.

Part of street art is its raw and rebellious nature. Since Sunday, a person has been writing about Braunsteiner’s work on the bus exchange sign.

Braunsteiner said that she “liked it very much”. She invited other artists to interact with the painting as the graffiti aspect is part of her love of street art.

“If it’s tagged, it doesn’t matter. It will only improve what I am trying to do.”

So far, the feedback from the community has been good, said Braunsteiner. On Sunday there was a crowd watching the artist paint and a bus driver told her she was doing a good job.

Quiet Dog Gallery co-owner Gill Starling said she obtained permission from the bus exchange for Braunsteiner to paint the sign. The sign was old and starting to look “so nasty”.

Braunsteiner started to work HIT! just after the lockdown in 2021.

The title of the exhibition HIT!should elicit a ‘slap in the face’ with its bright colors and energy and help people ‘wake up’ after the past two years.

“Slap – be awake, you’re still alive. You still need to make connections with other people.”

Two works were created in collaboration with subsequent artist Lee Woodman, which has resulted in artwork that differs from what either would normally produce, Braunsteiner said.

The collaborative element of the artworks evoked a playful energy. Although Braunsteiner and Woodman have never painted together, they often work as a sounding board for one another.

Braunsteiner previously worked as a pharmaceutical biochemist. After coming to New Zealand from Austria in 2009, she became involved in art. Braunsteiner is co-director of 18a Project Space.

Tineke Buser’s leg is going to be amputated in November, so she’s offering it as a practice canvas for budding tattoo artists.

Exhibitions on Independence and Partition to see around the world