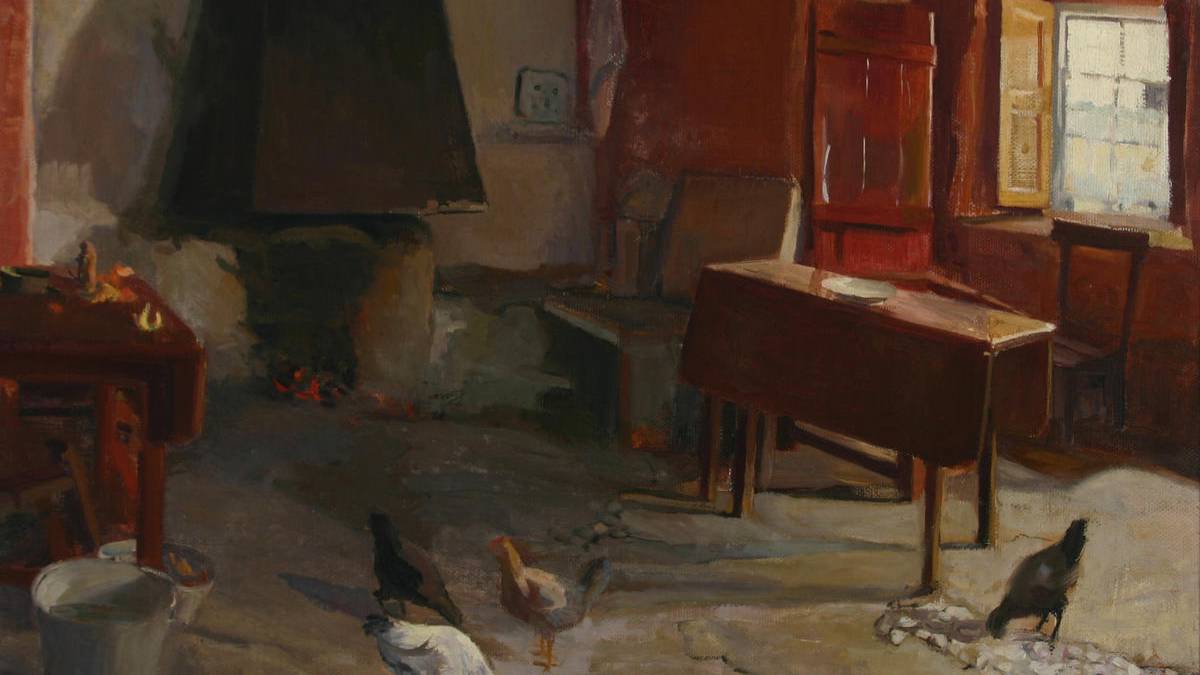 Edith Collier’s Grannie O’Ready’s Kitchen, c.1914, oil on canvas laid down on board.

Donating an artwork to the Sarjeant Gallery collection can be a wonderful way to commemorate a dear friend or family member.

The painting Grannie O’Ready’s Kitchen by Edith Collier was donated to the gallery in 1998 by advertising manager Geoffrey and his wife Di Martin to honor the memory of Richard Priest.

Richard was the youngest of four sons born to Alec and Ethna Priest, a prominent Whanganui family. Alec was a chest doctor at Whanganui Hospital from 1946 until his death in 1972. He was also a notable cricketer, playing Plunket Shield for Otago. Upon settling in Whanganui, he became active in managing the game and coaching schoolboys. The pavilion in Victoria Park is named for his contribution to Whanganui Cricket.

Richard attended Gonville Primary, Whanganui Intermediate and Collegiate Schools and graduated from the Universities of Victoria and Auckland. A keen sportsman, he represented the New Zealand universities in cricket on a tour of Australia.

Richard worked for several years in Canada for the multinational Procter & Gamble and also for the airline Wardair, now part of Air Canada. After returning to New Zealand he settled in Auckland and his skills were sought after by many in his areas of expertise, marketing and tourism, his brother Duncan said.

“Richard’s friendship with Geoffrey Martin was based on their shared love of creativity, especially since both were wordsmiths, combined with a serious sense of fun. Geoffrey, who was a successful advertising executive, admired Richard so much that he donated the Collier painting to Richard’s memory,” Duncan said.

Unfortunately, Richard died in August 1995 at the age of 44, leaving his widow, Mary Vavasour, and their daughter, Francesca, to live in Auckland.

Among the many letters Duncan received on his brother’s death was one from John Clarke, aka Fred Dagg, who was one of Richard’s closest friends.

In the letter, Clarke wrote, “Richard was a spectacular and steadfast friend… What often drew people to him was his brilliant expression of ideas… He took great delight in all kinds of things… and wherever possible he shared that delight immediately.” . His already wonderful sense of humor also had this deeper value. Laughing with Richard wasn’t just about sharing a joke. It meant communicating with a very generous spirit.

Martin and Trott became close friends, both working in the same building in Auckland as Trott director of New Zealand Opera Ltd. was. Martin was Trott’s marketing and advertising contact for the New Zealand Opera Company.

“He put in so much effort and did a great job creating amazing posters and billboards all over Auckland.”

When Richard died, Trott recalled how unhappy Martin was and in 1998 he accompanied Martin to Whanganui to present the gallery’s painting at an event organized by Bill Milbank. Edith Collier and Martin’s two friends Richard Priest and Donald Trott’s association with Whanganui made Grannie O’Ready’s Kitchen a fitting choice.

The painting shows a cosy, rural country kitchen with chickens pecking on the ground. It was one of many necklaces painted in the Irish fishing village of Bonmahon.

“In this work, as in other portraits completed at Bonmahon, Edith takes the traditional, if unclichéd, 19th-century subject of the dignified but impoverished peasant and applies it to a new post-impressionist vision,” wrote Greg Donson in the Text for the exhibition Edith Collier Selected Irish Works February 2012.

“It’s a nice idea that people are reminding of with presentations [those they care for]”, Trott said. “It’s something that’s there for all time.”

The painting has also benefited from the philanthropic spirit of Colin and June Whitlock, who paid for the restoration work on it in 2004.

Each time the painting is exhibited it is accompanied by the following line: “Collection of the Sarjeant Gallery Te Whare o Rehua Whanganui. Gift of Geoffrey and Di Martin in memory of Richard Alec Priest, 1998. This work was preserved with the generous support of Colin and June Whitlock in 2004.”