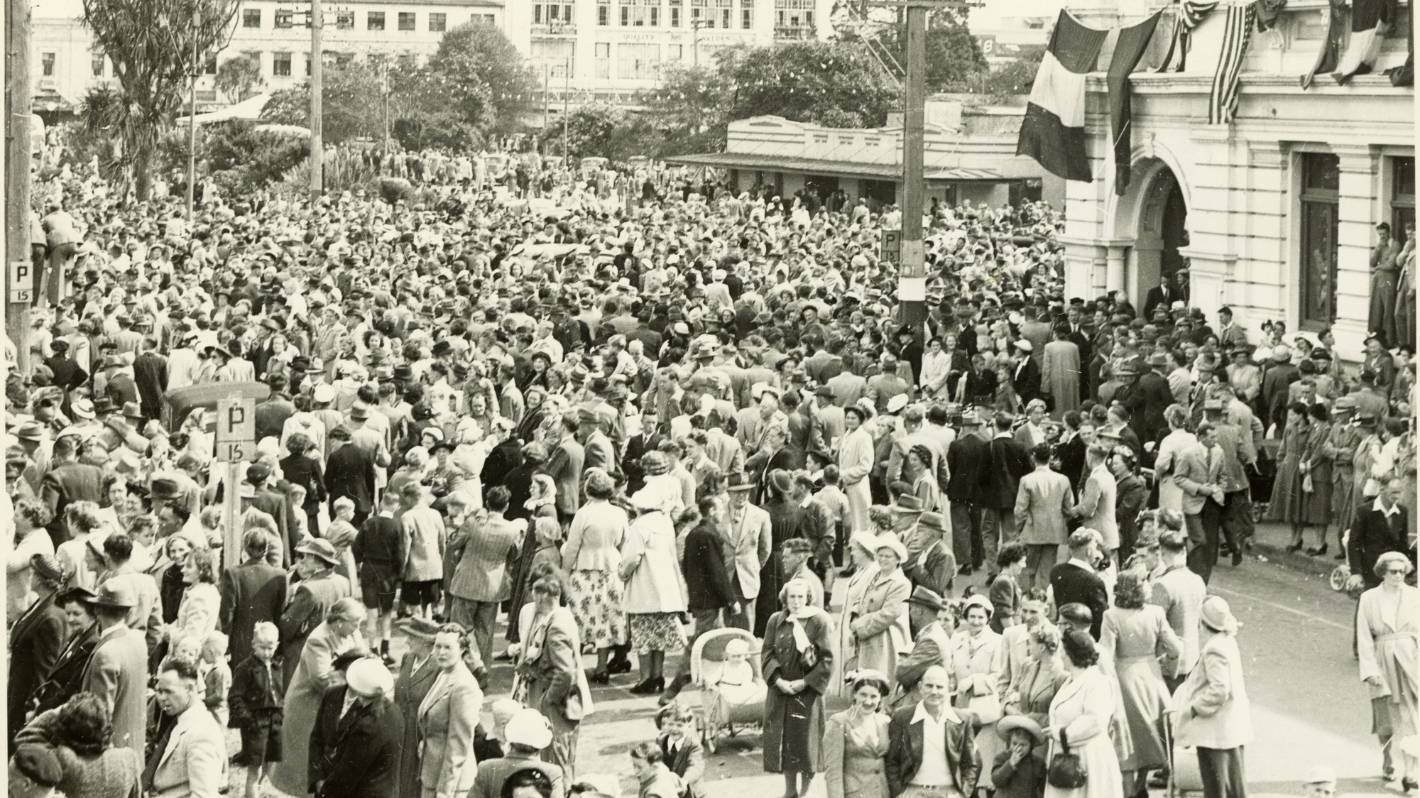 Previous Editions: The Boom and Prosperity of Palmerston North after the Second World War

After World War II, New Zealand brought a period of prosperity. Also known as the baby boomer years, high fertility rates led to a surge in population as families reunited and new families were formed.

And after the austerity of the war years was over, high employment and rising consumption placed Palmerston North in an ideal position to thrive.

First, it was the heart of Manawatū’s booming agricultural sector. With 90% of New Zealand’s export earnings coming from products grown on the land – wool, meat and dairy – Palmerston North took center stage.

Roads and trains – still the predominant way of traveling long distances – largely all passed through Palmerston North on routes north, east and west of Wellington. While flying was still a first for most, Milson Airport was the headquarters of Union Airways (later NAC) until 1953.

In 1947 a new council was elected. The previous council under Gus Mansford had assumed responsibility immediately after the war, with major work programs postponed by the Depression and World War II.

It was no surprise that this new council, headed by Mansford’s deputy Geoffrey Tremaine, would help the city grow to meet this new era.

Tremaine was unanimously elected mayor of Palmerston North after 20 years as a councillor. He would oversee the city for three terms until 1956, a time when the population rose to 35,632, an increase of over 10,000 since 1945.

Tremaine headed an all-male council. The first woman on the city council was not elected until 1962.

This embodied the society of the 1950s, in which men were seen as breadwinners and women as wives and mothers.

The council’s work has been pressured by a growing community and stricter government regulations.

Urban planning was required from 1953, with a focus on the councilors to plan a balanced city layout and future industrial, commercial, recreational and housing expansion development.

While Palmerston North had grown steadily over the years, its population grew much faster than the rest of New Zealand during the post-war boom, at 7.6% annually until the 1970s, compared with 2.7% nationally. There was also a growing Māori migration to the cities.

In Palmerston North, people identifying as Māori made up over 7% of the population in the 1970s, compared to less than 1% in 1945.

With this population boom, it fell to the council to expand its services, not only for its current population, but also for the expected continued growth. Specifically, that meant providing the infrastructure and housing needed for advancement.

With high fertility rates of four births per woman, much of this growth has been driven by young families looking for homes in new, low-cost neighborhoods.

To meet this demand, the boundaries of Palmerston North were expanded in 1949 to include the Milson and Kelvin Grove areas, and again in 1953 to include Awapuni.

The expansion of the city’s area continued into the 1960s, with two more boundary changes to allow for its expansion.

The dam, built by city officials to save money, was the city’s largest engineering project.

With the prosperity and confidence of the post-war era, people were increasingly exposed to overseas trends and expectations of a “modern” lifestyle grew. The 1956 census found that more than half of New Zealand households had washing machines, refrigerators and electric ovens, creating a flow-on effect.

Increasing reliance on electricity meant that the Palmerston North Municipal Electricity Department was described as “a steady earner” as it expanded its reach. Also, new industries and factories sprang up to keep up with consumer demand.

Steelfort and Terrazzo (NZ) Ltd (still operating in Palmerston today) were two such companies established in Palmerston North in the 1950s.

Other consequences of a sprawling city have included new suburban shopping malls within walking distance for stay-at-home mothers and children, as in Roslyn and Awapuni. And to accommodate a day “in the city,” the city government expanded its bus fleet to ensure all suburbs are served, with a promise of “service not profit.”

Other transport services also improved when the Milson Airport runway was sealed in 1958 and the promised rail detour to the outskirts of the city was finally completed in 1959.

The opening of the Freyberg-Gymnasium in 1955 also anticipated future needs.

The call for better cultural institutions also grew louder. While more was needed, the council modernized the opera house and established an art gallery in the 1950s, and planning was underway for a new library, which opened in 1965.

The recreation rooms also increased. Both Colquhoun and Awapuni Parks were established, and Skoglund Park developed in the 1950s, and Memorial Park, formerly called Fitzroy Park, was dedicated to those who died in World War II.

There are now a total of 16 recreation areas and parks in Palmerston North, with its flagship being the Victoria Esplanade. Famous for its cherry blossom street, it was more than a garden, with a campsite, golf courses, sports fields and the soon to be realized Lido complex, which opened in 1966, all in close proximity.

While much more was to be expected, there was no doubt that the post-war years were good for Palmerston North.

The population boom and high employment drove the city to grow and develop to meet the community’s expectations of an improving lifestyle and “booming” life.