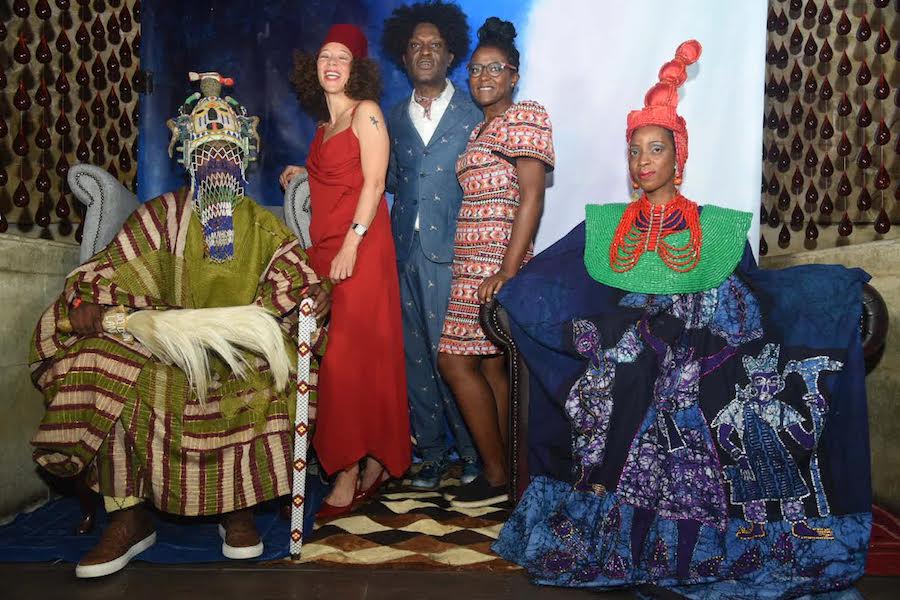 The new director of the Smithsonian’s National Museum of African Art (NMAfA) in Washington DC, Ngaire Blankenberg, led a team that created the â€œTaste! 24 Hours of the Smithsonian in Lagos revealed their plans for the globalization of the African arts in an exclusive interview with Yinka Olatunbosun.

Ngaire Blankenberg’s excitement is contagious even behind the mask. The newly appointed director of the Smithsonian National Museum of African Art had just arrived in one of Africa’s greatest creative destinations – Lagos, just in time for the art resurgence season. West Africa’s largest art fair, Art X Lagos, the African International Film Festival (AFRIFF), LagosPhoto Festival all ran in sequence and it was just fitting to bring the Smithsonian energy into the mix.

Blankenberg believes that Lagos is a popular place for art. So she made her first stop in the city that never really sleeps. Called â€œTaste! 24 Hours of the Smithsonian in Lagos ” was a collaborative and interactive art experience that brought visual, conceptual and performing artists together. Curated by a former Smithsonian Art Research Fellow, Temitayo Ogunbiyi, it featured sound art from Emeka Ogboh, photography and masterclasses from Ike Ude, while Ogunbiyi worked with Chef Renee Chuks on the food arts.

With a warm smile, the new director met influencers, Nollywood stars and of course on THISDAY. After her appointment in July, she will work to position the NMAfA as a more international institution serving the global African audience alongside the large African community in DC.

â€œOne of the things that sparked this conversation is that on February 5th, 2022 we have an exhibition opening called Nollywood Portraits and the artist Ike Ude is showing off his work. We are connected to Lagos through this exhibition. We have several board members from here and just thought this was a great place for us to start. We listen and are here to work with artists and institutions in Lagos, Nigeria and across the continent. We look forward to working together for a number of reasons. One is that we really want to support the growing ecology of artists and everything that goes with them. There are artists who can be supported: institutional support, not necessarily commercial support. We want to offer platforms, conversations and opportunities as well as encounters between artists, people and institutions, â€she revealed.

Blankenberg immersed himself in the diversity of the art experience from the point of view of the Smithsonians and offered a broad perspective on the perception of art. She explained the changing nature of museums around the world and why it is important that the art projects appeal to a wider audience. They can understand and relate to the themes and subjects raised in the works.

â€œWe work with our artists to make sure it’s an experience and engagement that doesn’t make people feel stupid. If you look at Emeka’s works in the soundscapes of Lagos, everything revolves around the senses in all these state experiences. He puts Lagos in different locations around the world and listening to the sounds of the city gives you a completely different experience.

â€œTayo’s work is phenomenal. She looks at botanicals and works a lot with farmers, agricultural producers and a cook to create a flavor. It’s about what you remember when you taste it. It’s also very demanding. All the ingredients we work with are all from Nigeria, â€she said enthusiastically.
In response to fears that the Smithsonian Experience might appeal to more Nigerian artists in the diaspora, Blankenberg, who is a native of South Africa, said that the Smithsonian Experience actually targets all African artists on the continent and at large.

â€œI mean, as Africans we move and live in different places. That doesn’t make us any less African, but it’s also important that we understand and support the things that are happening here so that we can have a fair exchange. Thatâ€™s why weâ€™re here. We’re not starting this in DC or in the Diaspora. We are here in Lagos. I haven’t given face-to-face interviews since joining the Smithsonian in July. I wanted to talk about the future here on the continent, â€she said.

Blankenberg began her career in television and documentary production before focusing on museum management. She was born in Winnipeg and has lived in several locations around the world including Canada, New Zealand, Africa and Europe.

As a consultant, Blankenberg has an international portfolio that includes institutions large and small, including the National Gallery of Canada, Superblue of New York / Miami, the Museum and Archive of the Constitution at the Hill (Johannesburg), and the Canadian Museum for Human Rights .
Blankenberg holds a Masters of Arts in Media and Cultural Studies from the University of Natal in Durban, South Africa, and a Bachelor of Journalism from Carleton University in Ottawa, Ontario, Canada.

It was very pleasing to see how passionately the trained journalist spoke about the networking of the arts in Nigeria and the possible perspectives of this confrontation with artists. The taste! A panel discussion on transformation presented the director of the LagosPhoto Festival, Azu Nwagbogu; Founder, ArtXLagos, Tokini Peterside and Creative Director, AFRIFF, Chioma Onyenwe. Blakenberg also announced that the layover in Lagos is a foretaste of Ike Ude: Nollywood Portraits, which opens next February at the National Museum of African Art in DC.

When asked how human trafficking at the Smithsonian’s physical National Museum of African Art has evolved since it reopened after the pandemic lockdown, she revealed it was pretty impressive.

â€œSmithsonian doesn’t have the full opening schedule in DC, but we’ve had really encouraging attendance levels compared to pre-pandemic levels. People really need to be in one physical space with one another. We believe there is a time and place for digital engagement and a place and time for us to be together, talk to artists and see works in real life. It’s an interactive experience that you can’t have online, ” she said.
The museum, with over 12,000 works of art that capture the different temperaments of African history from centuries to the present day, is not immune to renewed calls for works of art to be returned from Africa.

â€œWe have bronzes that we took from you. Since I’ve been on board, Prof. Tijani has spoken to us about the future of this collection and a very strong focus of mine is what I call “decolonizing the museum”. That’s not the end of the conversation. My vision is to talk to Africans about recognizing Africa and dealing with the multilingual complex of Africa, and at the same time I am aware that Western museums were terrible for Africans. The museum practice was racist, exploitative and abusive, â€she said.

In their opinion, the foundation of the museum is engaged in a racist discourse and therefore it is imperative to return the collections – the stolen works of art – to Africa.
â€œI’m really looking forward to how I can change that. It’s not just about that. How do we classify works? How do we talk about it? Who is involved in decisions? Who determines what we watch? What are our partnerships? Where does the money come from? Who pays? How do we take care of things? Do we take things and put them in glass cases just because white people think they should be kept there? â€She asked thoughtfully.

As an expert in museum management, Blankenberg is committed to questioning how museums as institutions have the responsibility to interact with people in new ways, paying attention to the small details that can create inclusion and ultimately eliminate discrimination.

â€œTo be honest, it happens in African museums as well as in Western museums. Just because a museum is in Africa doesn’t mean it doesn’t propagate Eurocentric ideas. It’s also about breaking the white taste. Not only Africans but also black people don’t trust museums. It’s like taking our cultures and putting them in cages, â€she noted.

While it may seem easier in some political areas to turn the talk of the return of art and artifacts to Africa into decisive action, the story is not the same in other countries where these works are currently exhibited.

â€œWe have to stop causing harm. The National Commission on Museums and Monuments in Nigeria knows we have the bronzes. We have to figure out how to get it back, and that decision is not my own. It’s that of the Smithsonian and the US government. If we do damage, we must take responsibility for that damage.

We need to build trust, and once we’ve done these three things we can start getting involved. We understand that a relationship needs to be built. And one cannot separate the question of repatriation from the question of talking to artists about the future. They are the same conversation, â€she argued.

While not an expert on African art, she admitted that she is both hopeful and cynical about the works of contemporary African art.

â€œI think the works that are coming out now are incredible and I think that there is a moment and that moment can also go away. The stories the artists tell are unique; inform something else. There’s a huge fantasy involved, â€she said.

“How what? What is Nigerian Food? I would like to go to a Nigerian restaurant. Well, I had the yam pounded. It’s good. Nigerian food means so many different things. Does it mean being grown in Nigeria? â€She asked rhetorically. The brief silence afterwards made for a thoughtful moment.