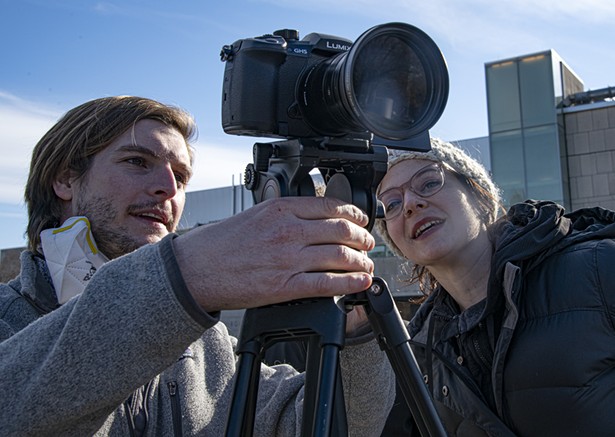 The first week of 2022 could have been tough for Anna Johnson, Artistic Director of Cadence Theatre. With COVID cases surging due to the Omicron variant, she pushed back the opening night of her production of the play “Everybody” from January to June. The move left the company’s stage as barren as it has been for all but two weeks since the pandemic began.

But Johnson hardly seems worried. She happily recounts the productive Zoom rehearsal she held for the third installment in the company’s Sitelines BLM film series, and eagerly discusses plans for a second iteration of the documentary/mockumentary film festival hosted by her teen-focused program KdentsTV is organized.

Their enthusiasm for projects that are a far cry from the live shows Cadence traditionally produces reflects a sea-change happening among local theater and dance companies. The move to film, which began as a mess early in the pandemic, is becoming an integral part of their ongoing operations.

“We’re redefining what Cadence is and what we offer in terms of storytelling,” says Johnson. “We have no intention of giving up live performances, but we have developed a passion for filmmaking. We’ve attracted some great filmmakers that we love working with and it’s not going to stop.”

The reluctance to fully embrace the film remains; Quality production takes both time and money that struggling companies don’t have, and legal issues like licensing can get complicated. But the frustration of adequately capturing live performances for a virtual audience has led many artists to take the plunge anyway.

“[The pandemic} really forced our hand,” says Kayla Xavier, a dancer, choreographer and member of the RVA Dance Collective. “When we had to move to livestreaming, we quickly saw the challenge of keeping audiences interested. Filming dance with a single camera on a tripod is just so uninteresting; sometimes you can barely even see the dancer’s faces.”

The Collective works out of Dogtown Dance Theatre, which recently added videographer Taylor Bonadies to its staff, in part to support its online platform, “Dogtown Stream.” Xavier is taking advantage of that relationship to develop an original piece specifically for film called “Twitterpated,” an allegorical romp with influences running from the film “Bambi” to Monty Python’s “Bureau of Silly Walks” sketch.

The flexibility of film will allow her to capture her troupe of eight dancers in action at local landmarks like the VMFA and the Byrd Theatre. But with mobility comes myriad other challenges. “Few local productions can afford to secure a set out in the world,” Xavier explains. “I have to worry, ‘Are there going to be cars parked in the way? Are there going to be people exercising?” Her first day of shooting, out of only six budgeted, was canceled due to snow.

Even with these issues, Johnson says there’s no going back. “You get something different from film,” she says. “We want to be specific in our storytelling: we want it to be close-up and we want to feel the energy of the artist. That means venturing into film. It’s not cheap but it’s extremely rewarding.”

Far from trying to turn back time, one theater company has made alternative delivery mechanisms for new stories foundational to their business model. Nathaniel Shaw, former artistic director for Virginia Repertory Theatre, started The New Theatre last year with Vida Williams, a data scientist with over 20 years experience in technology and innovation. Williams says she and Shaw started brainstorming innovative options for developing new work well before the pandemic.

“We don’t want to just make up for the lack of live theater now by doing horrible readings on Zoom,” she says. “We want to seize the opportunity to leverage technology in the performing arts, a sector that has been one of the last hold-outs resisting the full integration of technology.”

“Nothing is going to replace the communal, shared experience of live performance,” says Shaw. “But the arts, for numerous reasons, need to expand.”

In a media environment where podcasts and even Twitter threads become TV shows and movies, he and Williams want to be able to follow content creators wherever their ideas lead. “If we want to really support artists – to enable them to make a living – we have to take a multi-platform approach,” he says.

The New Theatre has hit the ground running with many projects, including a podcast and a series of staged readings. Soon they’ll launch “TNT First Look,” a series of short films presenting early script ideas in search of support for continued development. “We want to expose our audience to the ‘inception’ part of our commitment to walk with playwrights from inception through premiere and beyond,” says Shaw.

Though some traditionalists may balk at the evolving role of theater companies, Shaw says a multi-platform approach provides unprecedented opportunities to expand their reach. He points to Richmond Triangle Players’ online presentation of their So.Queer Playwrights Festival in early 2021. “They had people tuning in from Europe and maybe as far as Japan,” he says. “We [theater companies] We must do our part to open all possible doors.”

The Greatest TV Theme Songs of All Time – Rolling Stone