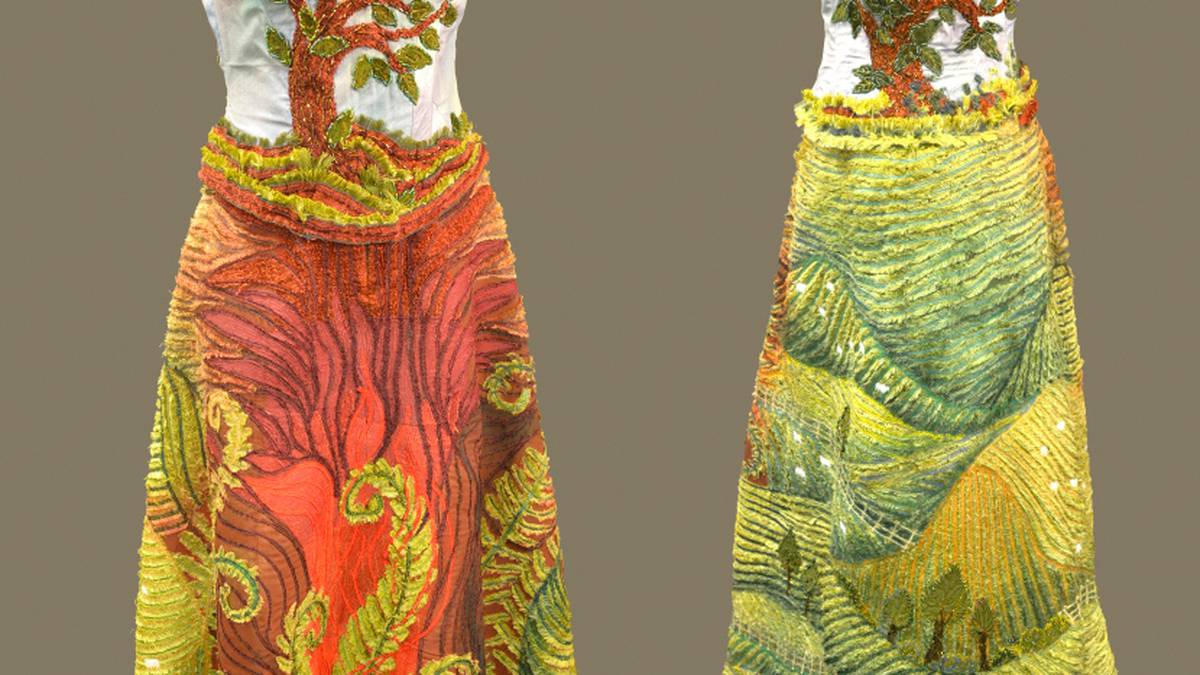 Museum Notebook: Outfit of the Month is by Daniella Sasvari

What could you make with $10 used curtains?

When we ask Daniella Sasvári that question, the answer is a visually stunning, award-winning costume. The costume is titled New Zealand in My Eyes. It is the special garment for the Ko te Kakahu o te Marama | of the Whanganui Regional Museum Outfit of the Month suitcase.

Daniella’s inspiration for the costume came from a combination of Māori myths, represented by the tree, fire and ferns on the obverse, and the organic nature of the rural landscape, complete with sheep, between Turakina and Ranana as shown on the reverse.

The costume consisted of four pieces – skirt, bodice, barrette, and bustle petticoat – and took about 300 hours to make. Daniella even made her own chenille yarn by layering the curtain fabrics before trimming and fraying the edges. Chenille is the French word for “caterpillar”, with the yarn resembling its fur. She used the basting foot of her sewing machine like a pencil to sketch the patterns of the landscape while attaching her homemade chenille.

The costume was originally made for the 2008 World of Wearable Arts Awards but was not accepted because it was too complicated and would not have stood out enough on stage. It won the Taranaki Arts Award, the wearable advertising competition for the House of Art and Framing, and was worn by the New Zealand contestant at the Miss Teen World Beauty Pageant. Daniella’s view of Aotearoa New Zealand has been seen far and wide. She donated the costume to the museum in 2010.

Born in Hungary, Daniella immigrated to Whanganui in 2007 with her husband and two young children. Before immigrating, Daniella was a costume designer for a theater company for ten years. In Hungary, many theaters are state-funded and have busy production schedules. In her role, she created costumes for six major stage productions, at least two children’s productions, and several smaller shows each year.

Settling into New Zealand with a different language, culture and two young children was a challenge. She had a job offer from Whanganui’s Kooky Designer Fashion but had to wait a year before starting work due to immigration issues. However, greater difficulties and hardships emerged when Daniella’s husband died in 2010, leaving her as a single mother of no fixed abode. She only received a permanent residence permit in 2012.

Daniella’s creative endeavors helped her work through the turmoil of her life.

In 2010 she rejoined WOW and this time was selected. Since then she has been selected almost every year with some success. She won an honorable mention in the WOW Weta costume and film section in 2014, was a finalist in 2019 and won the 2015 sustainability award. This award gave her the financial support to continue and complete additional studies. In 2016 she went to UCOL Whanganui and earned a Graphic Design Diploma and in 2017 she studied at The Learning Connexion and earned a degree in Art followed by a Diploma in Adult Education and an Advanced Diploma in Art and Creativity.

Daniella has a studio in Aramoho, Whanganui, where she describes herself as “a versatile painter and mixed media artist”. Her art is a combination of the symbolism of different cultures and epochs as well as her Hungarian origin. As the costume demonstrates, her art celebrates the rich diversity and tremendous beauty of the world in which we live.

• Trish Nugent-Lyne is the Collections Manager for the Whanganui Regional Museum.