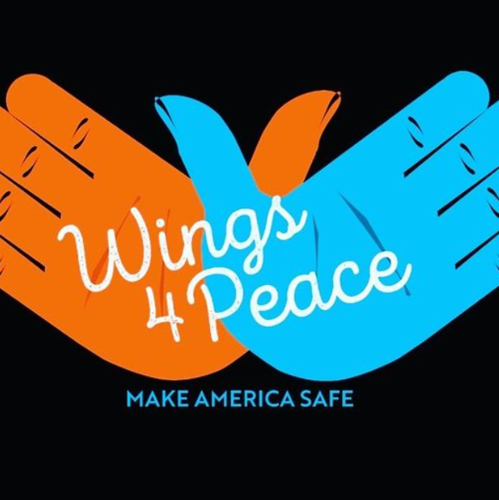 Artists 4 Peace, a grassroots coalition of gun safety artists formed in response to the Uvalde tragedy, announces the launch of its first national arts project. Wings 4 Peace launched nationwide on July 24 and will run until October 24, 2022.

Wings4Peace is an open invitation for artists, non-artists, children, students, teachers, adults, builders, craftsmen and activists to join a nationwide movement to end gun violence and promote peace. Participants will create multiple wing-themed artworks and share each piece in public spaces in coordination with other artists and creators across the country over the course of four months.

The project consists of two main components: 1) an artwork that will evolve over the months, and 2) an integrated message about gun violence that will be revealed word for word. The first mission challenges participants to create artistic renderings of wings, add the first word “PEACE” to their wings, and publicly display their creation outside in the late night of July 23 so that people everywhere will have wings on July 24 wake up (the anniversary of the shooting of Uvalde). They post photos and images on Instagram under wings_4peace with the hashtags #wings4peace and #artistsforpeace.

Lorie Lewis, Director of Wings 4 Peace, explains: “We started on July 24, but anyone can join the project at any time between now and October. There will be four sets of wings in total, with a message that builds over the months. We believe in the power of creativity and the power of unity. We believe everyone deserves to be seen and heard. We want everyone to hold hands and show the world what collective creative energy can do! This initiative is just the beginning. In this way, we plan to channel the nation’s creativity, inspire action, and improve the common good.”

Lewis is an arts manager/marketer from Milford CT. The Uvalde shooting was a turning point for them and the result was a message to March for our Lives’ David Hogg. Lewis told Hogg that she wanted to use the power of the arts to end gun violence and bring about peace. He asked her to put together a plan and send it to him.

Seeking an idea for grand piano art from Lewis’ art partner Paige Miglio (ED of Milford Arts Council in CT), Lewis created a three-phase creative roadmap. After the plan was reviewed, Hogg connected Lewis with Artists 4 Peace’s Gracie Lee Pekrul and the journey together began. Hogg and Pekrul founded Artists for Peace with a mission to bring creatives together to amplify each other’s work and collaborate on peace-building projects that engage conversations about gun violence.

The Wings 4 Peace project (phase one) provides simple tasks over time to spread wings far and wide and inspire change. The art and message will continue to evolve over the months, with the full message and artwork being unveiled on October 24th.

“Ending gun violence is possible, but it takes all of us,” says Pekrul. “We need everyone’s vision and voice now more than ever. We want to turn our anger into action and demand the peace and security we deserve. We want to counter the senseless hatred in our country with the power of creativity and unity. Wings are a symbol of security, freedom and new directions.”

The first task for Wings 4 Peace movement participants is to create an artist rendering of wings with the word PEACE prominently displayed, and then make the wings publicly visible on July 23 (late night) or the earliest morning of July 24 to make communities everywhere wake up to wings. The interpretation of wings can be as large as a mural on a building or as small as a painted rock. Some art suggestions include posters, sculptures, billboards, painted rocks, and even 3-D prints.

Room and structure ideas include trees, ladders, poles, fences, bridges, windows, yards, sidewalks, rocks, t-shirts, and stickers. Participants are encouraged to find a tall or wide space that suits the final product and build a four part message over time. There are options to participate via social media if public presence is not possible.

Darcy Hicks, Artivist from Westport, CT states, “We must keep gun violence in America’s mind with our brushes, hammers, nails and creative ideas! We’re not leaving. We’ll be seen. We are heard. We will hold hands and inspire change. This issue of security and peace is too important to ignore and everyone must be part of the solution.”

Wings 4 Peace would like to thank the team of artists, activists, graphic designers and marketers who prepared and planned the launch. Special thanks to Darcy Hicks, Peter Propp, Paul Livornese and Erin Whitten.

Questions? Contact Lorie Lewis, This email address is being protected from spambots. You need JavaScript enabled to view it.

The student spends the summer exploring France and learning the language