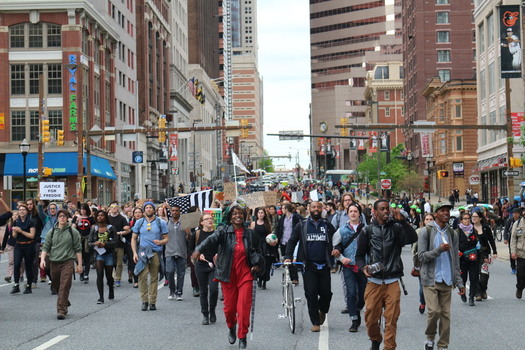 A new Baltimore museum exhibit, opening to the public today, aims to tell the story of Maryland’s struggle for civil rights, past and present.

“Passion and Purpose: Voices of Maryland Civil Rights Activists‘ is now on display at the Maryland Center for History and Culture. Featuring oral history and photographs, it examines how Marylanders have long been at the forefront of the national struggle for black freedom.

Linda Day Clark, a professor at Coppin State University and one of the exhibit’s advisors, said the exhibit is not about reinterpreting history, but rather allowing visitors to draw their own conclusions about events in the past draw.

“This exhibit is a great opportunity for people to come in and get a feel for what Maryland has done in the past and is still doing as part of the civil rights movement,” Clark said.

Joshua Clark Davis, an associate professor in the Department of Legal, Ethical and Historical Studies at the University of Baltimore and an adviser on the project, said the exhibit is intended in part to show how Maryland’s civil rights movement fits into the national context.

“There were struggles against discrimination, whether it was in schools or in theaters,” Davis noted. “It’s just so important to remind people that it wasn’t something that just happened in those other places, the struggles that took place in that state were a microcosm of that national struggle.”

“Passion and Purpose” is the focus when viewed from a long-term perspective. Upcoming public events related to the exhibit include a virtual talk on black activism in Maryland next Thursday with Clark and Davis and exhibit advisor David Taft Terry, an associate professor and coordinator of the Museum Studies and Historic Preservation program at Morgan State University.

An upcoming art exhibition in Chicago aims to provide a new framework to look at the city’s struggles with housing, past and present.

Nabiha-Khan Giordano, co-director of the gallery, said the idea was to show alternative solutions to the housing crisis.

“As with most private companies, there is an enormous asymmetry in private housing construction,” emphasized Giordano. “And it is precisely this unevenness that many exhibition participants have to represent.”

The exhibit, which opens Friday and runs through July 16, comes as many across the state are struggling to meet their housing needs as most pandemic-era support programs have ended. A February report The Institute for Housing Studies estimates that about one in four tenants in Illinois is in arrears on their rent, and more than half of tenants who are behind on their payments believe they could be evicted by May.

Isabel Strauss, artist at Riff Studio, is an architect by training. Her work for the Key Change exhibition is a collage of images and artwork, some by black artists, with archival photographs, including houses that have been demolished due to racist housing initiatives. Strauss said part of their goal is to stimulate discussion about reparations for black Americans.

“A lot of people shut down completely if you even mention the idea of ​​reparations,” Strauss admitted. “But I think most of us — from personal experience or through the lens of the current affordable housing crisis — I think most of us can understand the need and desire for housing.”

Black people in America have historically been excluded from home ownership by deliberate urban planning decisions and discriminatory credit and insurance policies known as redlining. Strauss noted that these practices have hindered the accumulation of wealth in black communities.

“Home ownership was a tool for accumulating wealth,” Strauss explained. “It can be a financial benefit and also give people a break from the breed reckoning that we’ve seen publicly in recent years, but also many of us have known and lived with it for much longer.”

The Key Change exhibit is a collaboration between the Weinberg/Newton Gallery and Mercy Housing Lakefront, an affordable housing non-profit organization. According to a press release, Mercy Housing operates more than 5,500 homes serving approximately 8,000 residents in Illinois, Indiana and Wisconsin.

“Worlds Imagined” is the theme of this year’s campaign for Developmental Disabilities Awareness Month – this is March. Iowans with disabilities and their advocates hope the public will pay more attention to their creative work.

The campaign is about promoting the everyday contributions of people with disabilities, they say, and how communities can be inclusive to help them achieve goals. Des Moines author Diane Glasswho was born with spina bifida, said she hopes her latest collection of poetry resonates on two important fronts.

Over the past decade, arts organizations and agencies have recognized this People with disabilities are underrepresented in the performing and visual arts. This includes participation, employment and even attending performances.

As part of the campaign the Iowa Developmental Disabilities Council is accepting submissions of creative work and testimonies this month to share with the public.

Adam Reynolds, a Des Moines resident who suffers from cerebral palsy, described photography as his passion. He shares a series of photos via social mediawith downtown serving as his favorite spot.

“I do day and night shots of the Capitol and many buildings,” Reynolds said.

He said he hopes one day to expand his audience through other avenues. Reynolds said his ultimate goal was to raise enough money to open his own gallery.

But to get there, he says, it needs more support from influential voices in the arts community and the wider community to help him achieve his dreams.

One would think that older Americans would read more than their younger counterparts because of their retirement or a more flexible lifestyle. In fact, the over-50s tend to be non-book readers.

“The 18-29 year olds are most likely to have read a book in the past year,” Rainie said. “Considerably more likely than those over 65.”

In many parts of the US and Canada, February is marked as I Love to Read Month, a good time to kick-start reading after the busy holiday season and with spring still a long way off in many regions.

Rainie noted that electronic or e-books were once expected to surpass traditional books in popularity, but that has not happened.

“Reading of e-books has increased, especially between 2019 and 2021, which is the duration of the pandemic,” Rainie admitted. “But printed books are still by far the most popular form of book reading.”

Engaged readers know that books can delve deeper into a topic than even the best-informed journalism, but Rainie pointed out that readers also like traditional books for nostalgic reasons.

According to Rainie, there’s even some data showing that reading can make you a better citizen.

He added those with a bachelor’s degree or higher who read more than those with just a high school diploma, as well as those whose annual household income is more than $75,000 a year.