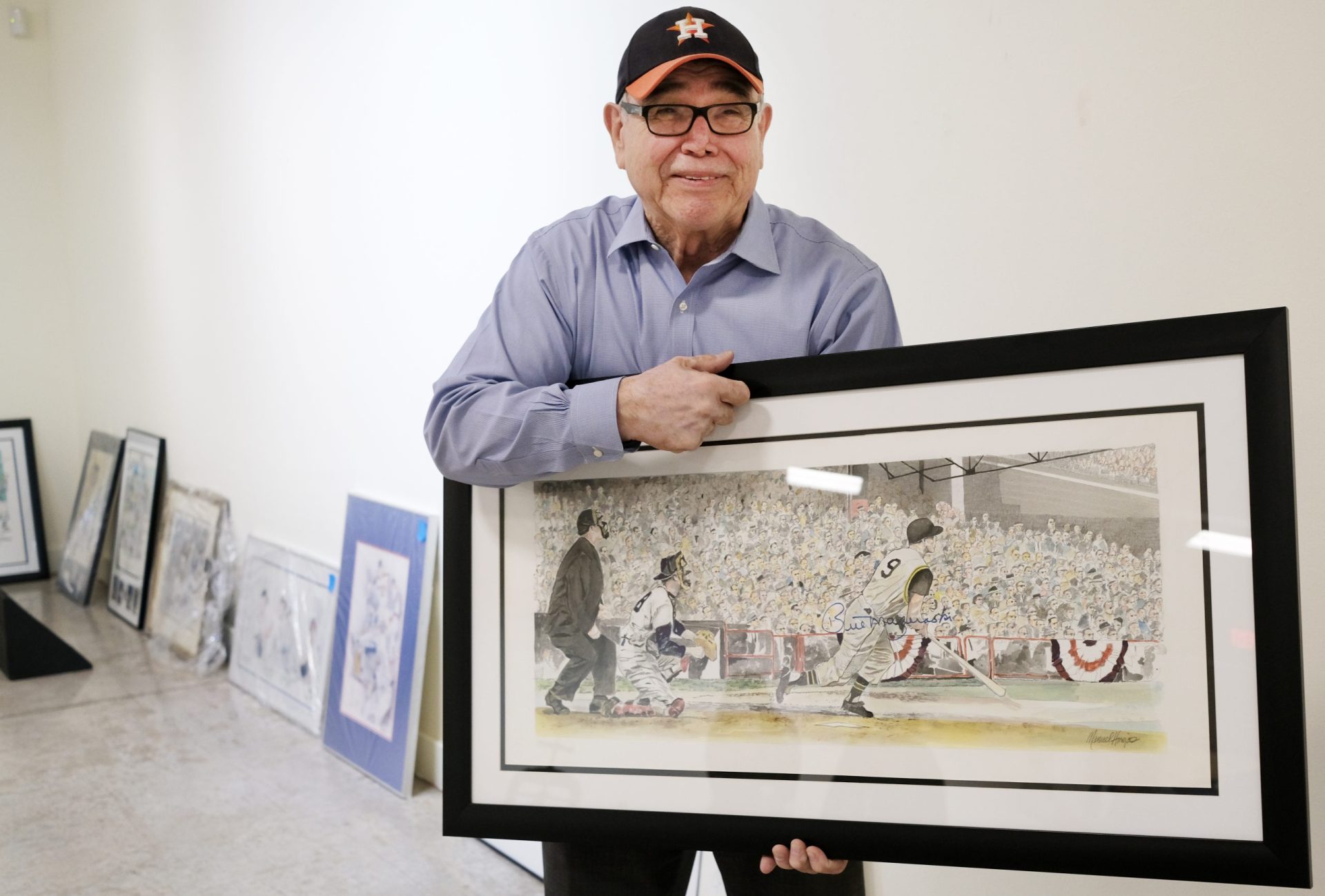 There is a story behind every painting Port Isabel artist Manuel Hinojosa exhibits at the Brownsville Museum of Fine Art, one of the largest exhibitions of his art to date.

“To paint, one must paint what one wants to paint,” Hinojosa said last week as The Art World of Manuel Hinojosa as his work was displayed in the museum’s grand exhibition halls.

“That’s why I chose these topics. I like sports, I like to paint people and I like to collect, so I combined them. That’s why I got the sports bar (Doubleday’s in Port Isabel.) I had no idea about the restaurant business but wanted to show my stuff. In the meantime it has become a bit cramped.”

Hinojosa was then distracted into two acrylic-on-black portraits, one of Brownsville’s singer-songwriter Kris Kristofferson and the other of Jethro Tull’s Ian Anderson, which he painted in the early 1970s while he was still an art student at Pan American University Edinburgh.

Hinojosa has been painting since he was 9 years old and received his first formal training in fifth grade. His first painting, painted on the back of an album cover in the tempra used by elementary school students, depicts a religious person. It occupies one side of a display case. On the other side stands a historical brass artifact unearthed on one of his many trips to Mexico.

Hinojosa has a lifelong interest in history, particularly Mexican history, and a room in the exhibit will be dedicated to paintings he made of soldiers on both sides of the Mexican-American War, some of whom fought on battlefields near Brownsville.

But the main attraction will be the watercolors of important athletes for which Hinojosa has become so well known.

Front and center is Hinojosa’s original drawing, approved by Dallas Coach Tom Landry, which Hinojosa painted as an 18 × 100 foot mural on North Conway and Tom Landry streets in Mission, his and Landry’s hometown, for a year in 1995.

On both sides are paintings of Dallas Cowboy greats like Zeke Elliott, Tony Romo, Tony Dorsett, Danny White and Troy Aikman, each with a pair of signed, game-worn shoes beneath the painting. In front of them are pedestals with two trophies, one the 2016 Telly Award for a 19-minute video about the mural and paintings, the other the 2017 Lonestar Regional Emmy for the same film by Ruben Garcia.

On either side of the trophies are a cue ball autographed by Landry and other members of the 1952 New York Giants and a Dallas Cowboys helmet autographed by all of the Cowboys’ quarterbacks. In the room behind the wall are paintings and game-worn shoes of football greats like OJ Simpson, Sammy Baugh, Don Shula and many others, running backs on one side, quarterbacks on the other.

The Emmy-winning video “What Do You Collect?” in which Hinojosa talks about the mural and paintings plays on an endless loop, he said.

“The whole idea is to support it, make it interesting. I saw them all play and met them all to sign my pictures,” Hinojosa said of the helmet.

“Over the years, Nike and some of the other companies have competed. They gave (athletes) tons of shoes, so it was easy for them to give away, so I have Marshal Faulk, Jim Brown, Earl Campbell, Marcus Allen, OJ, Eric Dickerson, Barry Sanders,” Hinojosa said. “I paint them and then have them signed.”

Hinojosa said he got Hall of Famer Green Bay Packers quarterback Bart Starr to sign his painting while Starr was in Brownsville when his construction company was building an expansion of what is now Valley Baptist Medical Center-Brownsville.

Among many other baseball paintings is one of the Bronx Bombers, Willie Mays, Mickey Mantle and Duke Snyder.

“Mickey Mantle was my favorite as a kid,” he said. “Here are the 300 game winners, Warren Spahn, Carlton Fisk, Niekro, Seaver, Mattox, Clemmens, Gaylord Perry. You know Gaylord Perry played with the Corpus Christi Giants in Harlingen. Baseball is my favorite sport.”

Hinojosa often wears a Houston Astros baseball cap and did so during the interview. “We’ve had season tickets for ages,” he said. “I can’t go to all the games, but I’ll go to as many as I can. I have a closet full of baseball cards.”

An autographed painting of Los Angeles Lakers basketball great Kobe Bryant was waiting to be hung, signed just before Bryant was tragically killed several years ago.

Amazingly, all of Hinojosa’s paintings are signed, which he admitted is an art in itself.

“In this collectible, people across the state know me, so if anything happens, people will call me. Sometimes I can’t make a game. … I got Kobe Bryant to sign what’s worth three, four thousand dollars right now, all Kobe Bryant is worth, so I had a guy get it for me. These guys go to hotels, they get ’em off planes. They’re hunters, they’re headhunters. I’ve been doing this for 30-40 years,” he said.

Together with his wife Norma and brother Ricardo, he owns Doubleday’s Sports Bar and Museum in Port Isabel, which houses the RGV Sports Hall of Fame Museum.

“You are art. I love to paint,” Hinojosa said of the sports portraits that he continues to paint and have signed. “I have jerseys, I have helmets, they sign them. I even got Tom Brady to sign it. He’s hard to come by. Johnny Unitas, this guy, Aaron Rodgers, look at that ugly signature, but I got him to sign it.”

Hinojosa’s profession is an architect. He graduated from the University of Southwest Louisiana as one of only a handful of architecture graduates nationwide to be called to Alpha Rho Chi, the architecture fraternity. He said he put himself through architecture school to draw cartoons of people starting at $5 apiece.

“Alpha Rho Chi is the highest award one can receive in architecture. Why me? because I could draw. It was easy for me to draw a building. Since then I have been familiar with design and got into it by accident. It wasn’t easy for me, but I persevered and have been involved with architecture ever since, but my love is art.”

As an architect with Kell Munoz Architects of San Antonio, he helped design the Margaret M. Clark Aquatic Center at 2901 FM 802 and buildings on the campus of what was then the University of Texas at Brownsville-Texas Southmost College, including the fraternity and health sciences buildings. Today he is the architect of the Brownsville Independent School District.

The Art World of Manuel Hinojosa runs through May 28th.