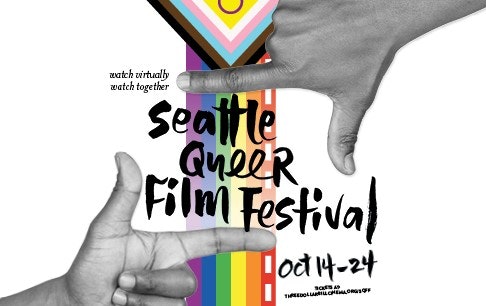 This year there will be virtual and personal screenings, a good mix of narrative features and short film programs by, for and about queer people. I’m really excited about a film called Tove. It’s about a Swedish-speaking Finnish artist named Tove Jansson. She was the artist behind the Moomins cartoons from the 1940s. The film goes through her life and her relationship with another woman.

For those of you who don’t know Wa Na Wari, it’s an apartment building that has been converted into a black art space in the Central District. Your mission is to uplift Black People, Black Artists, and Black Art here in the city. On Saturday, 3 p.m. to 6 p.m., they host Walk the Block, a fundraiser that takes people on an art walk through the neighborhood. There will also be food and music. It’s all outside. It will be just under a mile long. I am delighted to see the work of Barbara Earl Thomas. I’ve never seen her work outside.

Frisson at the Seattle Art Museum

The exhibition consists of 19 post-war and abstract expressionist works by American and European painters such as Jackson Pollock, Lee Krasner, Robert Motherwell and Clyfford Still. The value of the presentation is around $ 400 million. It was donated to SAM by the Friday Foundation, which represents the collection of the late Jane Lang Davis and Richard E. Lang, art collectors from the Seattle area, who have amassed an amazing collection of modern art.

Listen to the interview by clicking the play button above.