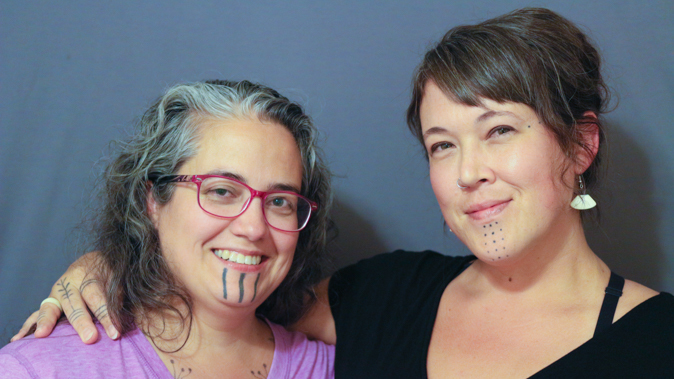 Indigenous women continue the tradition of facial marking to inspire their daughters: NPR

Grete Bergman, left, and Sarah Whalen-Lunn during their StoryCorps recording in Anchorage, Alaska in 2018.

Grete Bergman, left, and Sarah Whalen-Lunn during their StoryCorps recording in Anchorage, Alaska in 2018.

Grete Bergman had long wanted traditional facial markings, a practice for indigenous women in Alaska that European settlers were trying to wipe out.

But in 2016, Bergman became one of the first among the Gwich’in nations – the indigenous people whose homeland stretches from northeast Alaska to northwest Canada – to get tattooed to revert to a centuries-old tradition.

“My father would have hated it,” said Bergman. “He would have looked at me and said, ‘Why the hell are you doing this?’ “

Her Alaskan native father, she said, was beaten at school for speaking the Gwich’in language, “because being a native was the worst.”

“I didn’t know anyone who had their traditional markings,” Bergman said, “and every time I brought it up I got the same kind of ‘That’s a taboo. We don’t do this.’ “

The practice is at least 10,000 years old, but – as with language, food, and other indigenous customs – the practice was no longer used following prohibitions and taboos established by European colonizers in the 1900s.

When Bergman saw a design she was attracted to, it felt like a call from her ancestors to reconnect.

Bergman visited Inupiaq artist Sarah Whalen-Lunn, who she had heard had just completed a year of training to learn the art of facial marking.

Traditional Alaskan indigenous markings look like three lines that start below the lower lip and run down the chin. The meanings and designs vary from one group to another and are specific to the traditions of each group, and the practice is often tied to a rite of passage or significant event.

Bergman was the first person to tattoo Whalen-Lunn with the face markings.

“When I came over to do your markings, I was nervous,” said Whalen-Lunn, 43.

During the trial, Bergman held hands with her then seven-year-old daughter.

“That moment changed me,” said Whalen-Lunn.

Bergman inspired her to have her own markings inked in the following year.

“A lot of people are still scared,” said Whalen-Lunn. “You suddenly became this pillar of strength for me.”

The two women carry on the tradition of skin stitching for their daughters – to show them it’s okay to be proud of who you are, said Whalen-Lunn, who is the mother of three daughters.

“It’s more than just how you look. It changes the way you wear yourself. And we do it so our girls can do it,” she said.

Bergman has two young girls himself.

“I feel like I gave them something that my grandmother took away,” she said.

Since Bergman got her Native Alaskan markings, more and more women have volunteered to take part in the exercise.

StoryCorps is a national, not-for-profit organization that empowers people to interview friends and loved ones about their lives. These conversations are archived in the American Folklife Center in the Library of Congress so that attendees can leave a legacy for future generations. Find out more, including how to interview someone in your life, at StoryCorps.org.