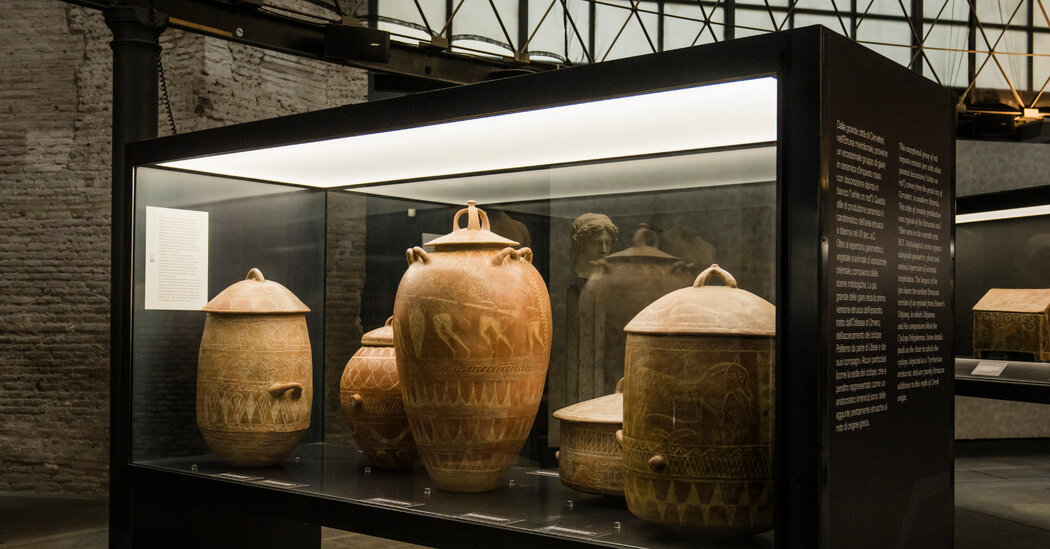 In Rome, a new museum for recovered treasures before returning home

Salvaged art is a broad term, it turns out, and the museum showcases the countless ways works of art can be saved — from thieves, from the wreckage of earthquakes and other national disasters, from ancient shipwrecks in the Mediterranean, or from the ravages of time by Italy’s experienced restorers.

Italy’s culture minister, Dario Franceschini, said at the inauguration of the museum that it will “show the world the excellence of our work” in all these areas.

But it’s telling that the museum’s first exhibition – which runs until October 15 – focuses on the recovery of looted art and pays tribute to Italy’s Carabinieri Command for the Protection of Cultural Heritage. The unit is credited with bringing thousands of artworks back to Italy, “effectively thwarting the black market in archaeological artifacts,” explains a plaque on display.

About 100 pieces – Graeco-Roman vases and sculptures and even coins from the 7th to 3rd centuries BC. – are on display in the museum, which was installed in a cavernous hall built as part of the Baths of Diocletian and is now affiliated with the National Roman Museum.

However, your stay at the exhibition here will be something of a pit stop.

For years, the policy of Italy’s culture ministry has been to return salvaged artifacts to the museums closest to where they were likely looted, a process that can sometimes involve laborious deductions given the secretive nature of the excavations.

For example, when the looted second-century AD marble statue of Vibia Sabina, Hadrian’s wife, was ceded by the Museum of Fine Arts in Boston in 2006, it was returned to his villa in Tivoli (although it is on). temporary display these days in Rome, presented by the Chamber of Commerce).

The task of determining where to return the artifacts in this new museum will fall to a team of archaeologists and experts.

“I consider this a museum of wounded art because the works on display here have been stripped of their discovery and belonging context,” said Stéphane Verger, the director of the National Roman Museum, which oversees the new museum.

The Italian focus on recovering art and returning it faithfully to its places of origin, no matter how remote, has had its critics. Some say that in a globalized world, where efforts are being made to spread culture, address problems internationally, and break down economic and social barriers, the reclamation of Western antiquities speaks to a more isolated insistence on the importance of national identity. Others argue that antiques are best seen in institutions that draw millions of visitors, rather than in local museums in outlying towns, where they attract dust rather than people.

A case in point is the development of an exhibition called Nostoi: Recovered Masterpieces, from the Greek word for homecoming, which was first staged in 2007 by Italian cultural officials in triumphant recognition of their success in securing the return of stolen antiques. The exhibition, held at the Italian Presidential Palace in Rome, recognized Italy’s tremendous success in convincing several American museums to return dozens of items to Italy, most notably the Metropolitan Museum of Art in New York and the J. Paul Getty Museum in California.

But as of 2017, a refurbished version of the “Nostoi” exhibition is installed in a series of small rooms in a low-rise building in a central square in Cerveteri, once an Etruscan fortress called Caere, some 25 kilometers northwest of Rome. The exhibition does not have regular visiting hours, but a tour guide association that uses adjoining premises opens the rooms on request.

“We depend on volunteers to keep it open,” noted Alessio Pascucci, who was mayor of Cerveteri until last month (he did not run for re-election), who nonetheless hopes the current museum can become a national institution for repatriated Art.

A stone’s throw away, arguably Italy’s greatest prize in the war against anti-looting, the cherished Euphronius Crater is also on display in a local setting where it can be displayed in context and boost local tourism and business. The 6th century BC red-figure crater had been looted from a Cerveteri tomb in 1971 and sold to the Metropolitan Museum of Art a year later for $1 million, an unprecedented sum at the time. The Met abandoned the crater in 2006. After a stay at Villa Giulia in Rome, he is now a permanent addition Archaeological Museum of Cerveterialong with a kylix, or drinking cup, also by Euphronius, which the Getty Museum returned to Italy in 1999 after evidence of its murky origins emerged.

Franceschini, the culture minister, said the idea of ​​a new museum that would exhibit salvaged antiquities before they are returned to their local origins came to him when these two pieces were loaned to the Archaeological Museum of Cerveteri in 2014. Rather than return the pieces to Villa Giulia, culture officials decided the two ships would be better off at Cerveteri, near where they had been illegally excavated.

Now the crater of Euphronius is “a symbol of the city itself,” Franceschini said at the inauguration of the Museum of Saved Art. “We are certain that getting the works back where they belong is of paramount importance.”

Vincenzo Bellelli, the new director of the Cerveteri Archaeological Park, said it was a “bold decision” and an “enlightened policy that gave local museums new opportunities” to expand their attractiveness. “It’s betting on cultural sites,” he said.

In October, following the conclusion of the exhibition at the Museum of Rescued Art, Cerveteri is expected to be allocated 20 pieces, including a lidded white-on-red pithos decorated with the blinding of Polyphemus, the giant son of Poseidon and Thoosa. The pithos or great vessel is an Etruscan work from the seventh century BC. B.C., recently recovered from the Getty Museum.

Bellelli said that for the time being the pithos would be given their own display case in the museum alongside the Euphronius pieces.

But like Verger, he argued that the story of the looting and recovery of these pieces should only be a footnote to the much more important narrative of the city’s history.

The discovery of two vases made by Euphronius, one of the most famous artists of ancient Greece, at Cerveteri shows the importance of the Etruscan city at that time. “It was a hub in ancient times,” a “great market,” and a place where ideas traveled.

“There was a reason why such precious vases were found in Cerveteri,” he said.

Until then, however, the returning artifacts will be in the spotlight at Rome’s new museum.

The works exhibited there had been confiscated by the Manhattan Attorney’s Office from museums, auction houses and private collectors in the United States, based on evidence provided by the Carabinieri as to their illegal origin.

Last December, 200 pieces were turned over to Italian officials, a handover described as the largest single repatriation of relics from America to Italy, and a return so significant “called for an exhibition,” said Massimo Osanna, the head of the culture ministry’s directorate for Museums.

“We are already working on a new exhibition because we have so much interesting material,” he said.

Verger said the current exhibit “exemplifies the great effort of the carabinieri” in Italy’s decades-long crusade to curb the antiques trade, as well as the work of Manhattan prosecutors “which was very important.”

In the showcases there are explanatory panels summarizing decades of investigations by the Carabinieri, which often led to criminal proceedings and the subsequent return of the ill-gotten goods. But there aren’t many pointers to the museums and collectors who – accidentally or not – fueled this black market. The dozens of vases and jars and statues and coins are presented largely by type and potential provenance rather than the collections from which they were stolen.

It was a conscious decision not to blame.

“The piece has been returned, it’s back,” said Verger. The exhibition in the museum is a kind of “clip in the life of the object,” he added. “A phase of illegality is over, now a new life begins.”

Poland’s top judge burns with verdicts and political connections. She insists she is independent. – POLITICS