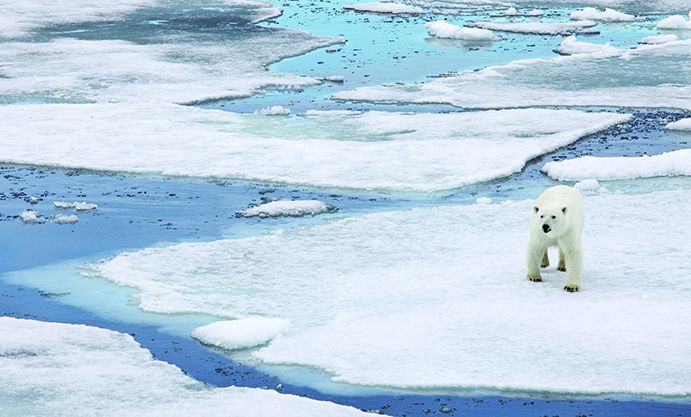 Scientists have found that ice thickness in parts of the Arctic Ocean has decreased by 90 percent, showing the unprecedented impact of climate change on the planet.

More than 120 experts carried out extensive investigations in the Barents Sea and discovered record-low ice quantities, which they believe have led to a decline in sea ice imports from the polar basin.

The sea, which stretches from the Russian east coast and mainland Norway to the Svalbard Archipelago, makes up a small part of the Arctic.

The region is an important location for hydrocarbon exploration and fishing, especially for Russian and Norwegian fishermen.

Overall, the warming of the Arctic contributes to almost 4 percent of global ocean warming, experts estimate.

The group of scientists behind the study from more than 30 European institutions published their results in the peer-reviewed Journal of Operational Oceanography.

Your paper, entitled the Copernicus Ocean State Report, details how Arctic ice levels have hit record lows in the past two years.

The scientists also linked extreme weather fluctuations with cold spells and ocean heat waves to reported changes in marine life in the North Sea, which stretches from the United Kingdom to mainland Europe.

The chair of the report, Dr. Karina von Schuckmann of Mercator Ocean International said there was a need for improved development and delivery of cutting-edge marine knowledge and products, as well as regular monitoring through the EU-funded Copernicus program.

“Climate change, pollution and overexploitation have put the ocean under unprecedented pressure and urgently require sustained governance, adaptation and management measures to secure the various life-sustaining roles that the ocean offers for human well-being,” she said.

“Viewing the sea as a fundamental factor in the earth system and taking into account the multidimensional and networked nature of the ocean is the foundation for a sustainable future.”

Scientists also said that in 2019, above-average waves in the southern Mediterranean were linked to global warming, as were four consecutive floods in Venice in November of that year.

Further findings in 2019 were unusual sea levels and extreme wave conditions in the Gulf of Bothnia in the Baltic Sea.

“This edition of the Copernicus Ocean State Report provides insights into the design and functioning of downstream tools and is looked at from multiple angles by depicting the state of the changing ocean and the evolving effects of the changing ocean in line with climate change The environment, people and the environment are examined, social and economic systems and discuss the importance of science, data and services for society and politics in adapting to these effects. “