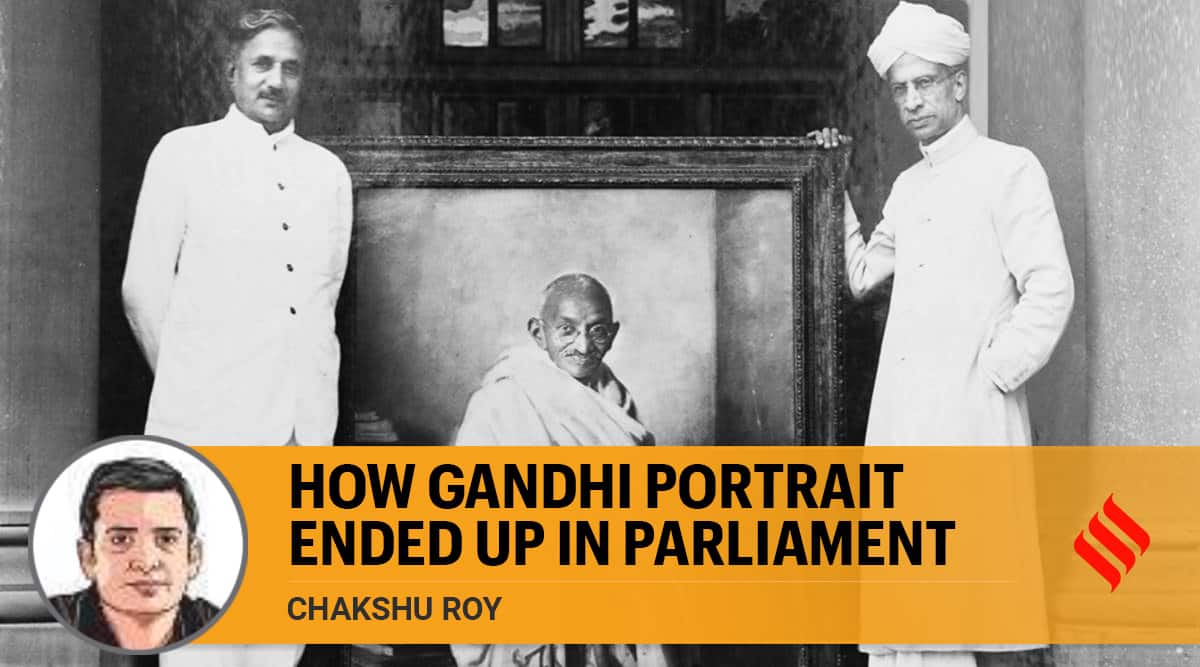 How a Gandhi portrait ended up in Parliament

The Royal Academy of Arts has held a summer exhibition in London for 250 years. Every year, those interested in art eagerly await the opening of the exhibition to see works by established and emerging artists. So great is the attraction that at the 1914 event, the Academy showed Lutyens and Baker’s design for the New Capital Delhi buildings. The exhibition was also controversial. In 1932, despite the selection committee’s acceptance, the Royal Academy rejected a portrait of Mahatma Gandhi from the summer exhibition. This painting occupies a prominent place in the Indian Parliament today.

It was the first portrait to adorn the central hall of Parliament, where members of the Constituent Assembly debated the Constitution. Every President of India has stood under this painting and addressed MPs from Lok Sabha and Rajya Sabha. The artist who painted it was Captain (later Sir) Oswald Birley, a New Zealand born Englishman. Birley had studied at Harrow and Cambridge, was a veteran of both world wars and one of England’s most sought-after portrait painters. Before painting Gandhi, he had an illustrious list of personalities such as King George V, the King and Queen of Siam (Thailand), and British Prime Minister Stanley Baldwin, who sat for his portraits. Birley was no stranger to India either. By then he had visited India twice and traveled the country extensively.

Birley had painted the who’s who of British society, and the Academy had regularly exhibited his work. The rejection of his Gandhi painting sparked speculation that the academy acted under government pressure. Contributing to the controversy was the adoption of two of his other portraits, one of which was of Lord Irwin, the former Viceroy of India. The President of the Royal Academy denied any political motives for the rejection. He said the Gandhi painting was the least important of the three works submitted by Birley. One newspaper commented that the Gandhi portrait was not “good enough”. The rejection made the portrait more famous. Sarvapalli Radhakrishnan used his picture in the volume he published in 1939 on the occasion of Mahatma Gandhi’s seventieth birthday.

The portrait, which ended up in parliament, required the intervention of Sir Prabhashankar Pattani, the dewan of the princely state of Bhavnagar. The Dewan and ruler of Bhavnagar are known for campaigning for students to study engineering at the Massachusetts Institute of Technology (MIT). Economic historian Ross Bassett says, “In the 1930s, a small princely state in Kathiawar, Bhavnagar, was the leading source for Indian students at MIT. In fact, Bhavnagar, who makes up less than 2 percent of India’s population, produced nearly half of all Indians who graduated from MIT in the 1930s. “

Bassett found that some Bhavnagar students received scholarships from the princely state to graduate. Sir Pattani studied these students during his visit to Boston. Material from the recently established Pattani archives shows that the dewan was a practical administrator. He instituted a plan to free farmers from the burden of private debt and passed a law to cap the interest rates that moneylenders could charge in the state. Sir Pattani was also an associate of Gandhi. In September 1931 he traveled to London with Gandhi. Both took part in the second round table conference – Gandhi represented the Congress and Sir Pattani, the princely state of Bhavnagar.

During this visit to London, Gandhi had a busy schedule. He didn’t pose for sculptors trying to bust him, and it’s unlikely he would have sat for hours for a portrait. It is more likely that Birley made a sketch of him and then finished the painting in his studio.

Two weeks after India’s independence and five months before Mahatma Gandhi was assassinated, the portrait arrived at the parliament building. Sir Prabhashankar Pattani had died in 1938 and his son AP Pattani presented the portrait to the Constituent Assembly. He informed his colleagues that Birley had taken the portrait for himself and agreed to part with it when his father told him the portrait was for India.

Birley painted portraits of other famous people such as Winston Churchill and General Dwight D. Eisenhower (later US President). He died in 1952 at the age of 72. A year before his death, he held a retrospective of his portraits and paintings in London. He was proud of his portrait of Mahatma Gandhi and considered it “good enough” to convince the Indian government to loan it for the exhibition. It was the only time the portrait left the country.

The author is Head of Outreach, PRS Legislative Research

Mini skirts, stones, pop art: why the swinging 60s will never go out of style | focus