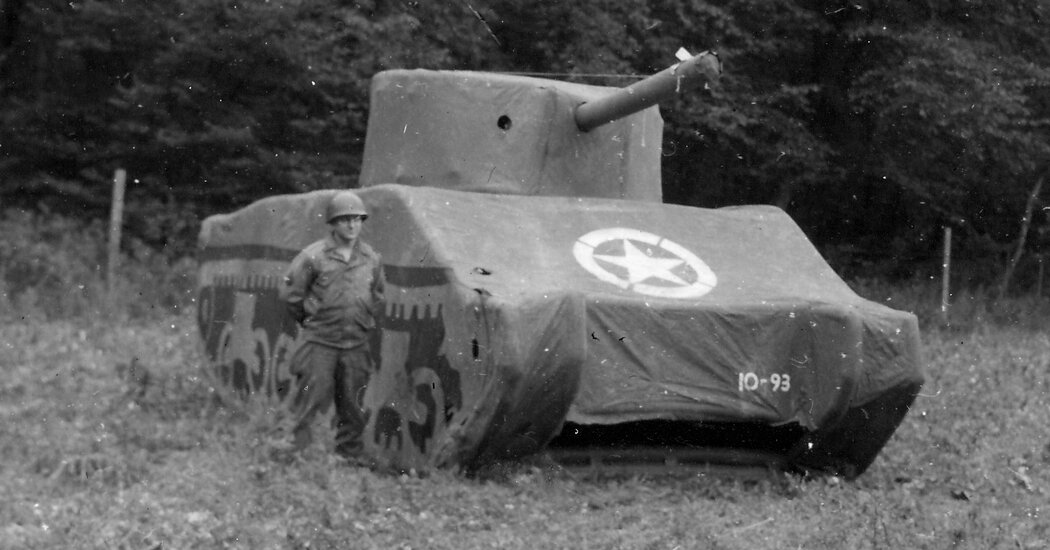 In one of the 23rd’s most elaborate sleights of hand during the critical Rhine campaign aimed at Germany’s ultimate annihilation, the unit deployed 10 miles south of where two American Ninth Army divisions were to cross the river. To divert attention from the actual divisions, the Ghost Army conjured up a decoy force of inflated tanks, guns, planes, and trucks; sent out misleading radio messages about the movements of American troops; and used speakers to simulate the sound of soldiers building pontoon boats.

The Germans fell for the ruse. They fired on the divisions of the 23rd while the Ninth Army troops crossed the Rhine with nominal resistance.

During this campaign, Mr. Bluestein and other soldiers would visit bars and gathering places, pretending to be high-ranking officers, to criticize among the locals that the Americans were up to something. The hope was that German spies would eventually be misguided.

But Mr. Bluestein was an artist at heart. Before the unit began using inflatable tanks, he painted on fabric draped over wooden tanks to make them look authentic. He stenciled insignia for 23rd members and produced posters to distribute in cities – all to create an authentic upsurge.

Mr. Bluestein had a long post-war career as an industrial designer for companies making household appliances such as refrigerators and toasters, but in retirement he found his love for art again. Nowadays his favorite objects for sculpture are pins, a tribute to his father, a tailor, and his mother, a seamstress.

About half the Soldiers in Mr. Bluestein’s unit, the 603rd Camouflage Engineer Battalion, were artists, said Rick Beyer, a documentary filmmaker who chronicled the Ghost Army’s history and pushed for the gold medal.

The art of Saudi drift culture