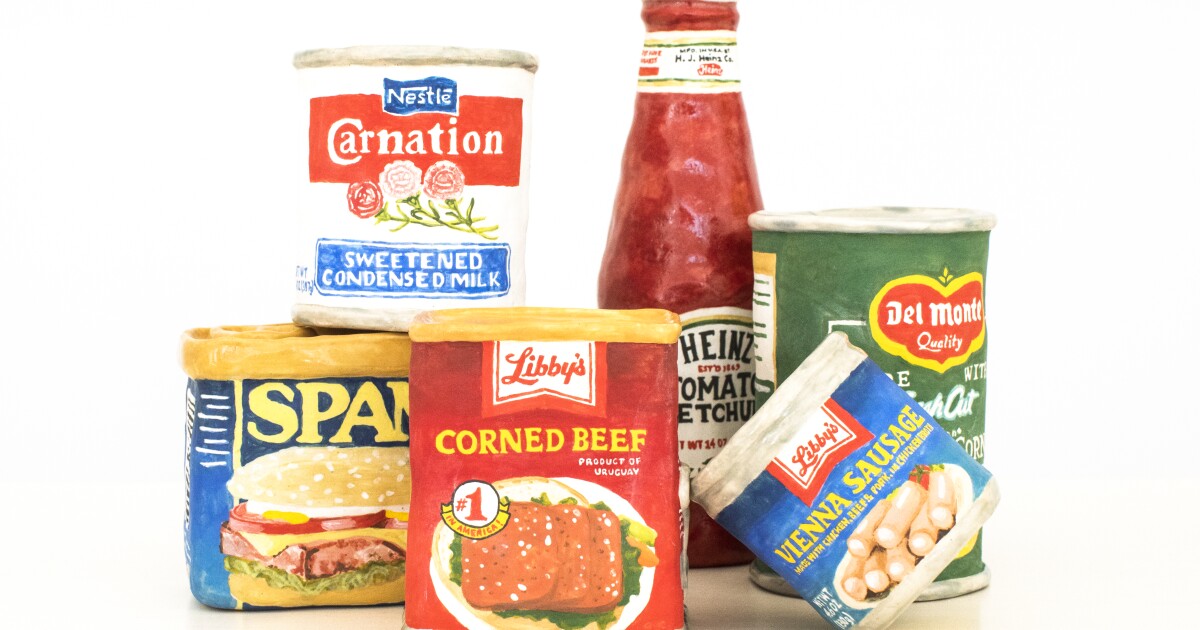 Before the Brooklyn-based ceramic artist Stephanie H. Shih Clay sculptures for her first solo show in Los Angeles – currently on display at Chinatown’s Stanley’s Gallery – she gathered ideas from her over 20,000 social media followers.

In order to paint a broader picture of the East and Southeast Asian diaspora that went beyond her own experience as a Taiwanese American, she asked her followers what common Western foods she considered “Asian”. Shih was surprised and touched by people’s eagerness to share their stories.

Food is very personal, said Shih, 34. “We bring it to our home and feed it to ourselves and our loved ones. So this food feels very, very personal to people. “

Shih’s New World Mall exhibition is a collection of 30 life-size ceramic and hand-painted replicas of these nostalgic products. (The show’s name refers to a mall in Flushing’s Chinatown, New York City.) There’s a clove-sweetened condensed milk can, a nod to its use in Vietnamese coffee and Hong Kong-style toast. A ceramic Libby’s Wiener sausage jar represents her role in Filipino meatloaf and Korean budae-jjigae (“army stew”). And a bottle of Heinz ketchup is an indispensable ingredient for Japanese spaghetti.

The idea for the “New World Mall” arose from an earlier group exhibition “Making in Between: Contemporary Chinese-American Ceramics” at the American Museum of Ceramic Art in Pomona, in which Shih took part last year. (One of the sculptures she showed was a can of Spam, which is part of her new exhibition.) Her work caught the attention of Sebastian Gladstone, director of the Chinatown Art Gallery.

“These handcrafted items had this real intimacy that I found fantastic,” said Gladstone.

He reached out to Shih last December and she began work on the pieces that touch on the ideas of migration and colonization. Except for the Spam and Ferrero Rocher chocolates, everything was specially made for this new exhibition. The collection includes a blue Royal Dansk cookie jar, a bottle of Maggi spice and a bag of King’s Hawaiian Sweet Rolls.

Shih questions the idea of ​​authenticity when it comes to certain foods. As an example, she said, many people mistake banh mi for Vietnamese, although its creation was a by-product of the French occupation and the introduction of baguettes and pies to the country.

“There’s all this discourse about American Chinese food not being authentic, but I think that’s really inaccurate and an almost dangerous way of thinking about culture,” Shih said. “Culture is not static. It’s always moving. And so I really wanted to make a statement with this series that these western products that we incorporate into our kitchen are also authentically part of our cultures. “

Shih does a lot of research before creating her artwork. She prefers to replicate older versions of product labels, ideally from the 1980s or 1990s when there was a great wave of East Asian immigration to the United States. (Her parents left Taiwan in the early 1980s to attend graduate school in Philadelphia, where Shih was born.) She spends hours digging through Google images and old YouTube commercials to get the details right. For this series, she even bought a 1990s Ovaltine canister on eBay. It was still half full of the original chocolate milk powder.

After Shih has modeled one of her clay pieces, she meticulously paints it with underglaze before the first firing in the oven. The next round of glaze depends on the material used in the original product – for example, glass or paper or metal. If there is a paper label, it will skip the second glaze for that part of the sculpture. The look of glass is reproduced with a high-gloss finish, while plastic and metal lids have a glaze with a lower gloss. Then she burns the work of art again in the oven.

At Stanley’s, their 30 sculptures are presented together on a U-shaped table, takes up little space in the 1,200 square meter gallery.

“I love the idea of ​​this really subtle little piece of work that you get really familiar with in this big room,” said Gladstone. “Big statements can come in very small packages.”

Shih embarked on a non-linear path in her art career. Growing up in Princeton Junction, NJ, she has always had an interest in the arts, particularly printmaking, photography, and oil pastel. In high school, she took a ceramics class where she said she made “bad bowls and rather embarrassing sculptures of naked women.”

Shih wanted to go to an art school, but her parents didn’t approve. She attended Boston University and then worked for a decade as a copywriter and creative director at technology companies.

In 2015 she resumed ceramics as an art therapy to treat her chronic back pain. One of their first pieces that caught the eye was ceramic dumplings. In 2018, after making her first product replica, a black vinegar bottle from Chinkiang, She was inspired to make a number of grocery stores. For the past few years, Shih, who has had other solo shows of food items at the Perrotin Gallery in New York and the Wieden + Kennedy Gallery in Portland, Oregon, has mainly made a living from her artwork.

There is a sense of home and belonging in Shih’s artwork that extends to her activism in helping marginalized communities through fundraising. That year she raised $ 45,000 for Asian immigrants fighting deportation by the U.S. Immigration and Customs Service.

As anti-Asian racism and hate crime have increased in recent months, Shih said she believes the Asia-American diaspora is experiencing a major period of growth and she hopes it will continue.

“The current discourse on Asian-American identity focuses on representation and authenticity, both of which can be interesting topics,” Shih said. “It’s exciting to see my colleagues becoming more interested in our power as a united bloc.

“I hope we can move beyond these issues and to political projects that actually bring us justice and security, such as health care for all, workers’ rights and ending deportation,” she added. “So I feel a little nervous, but overall I’m confident of what this moment could bring.”