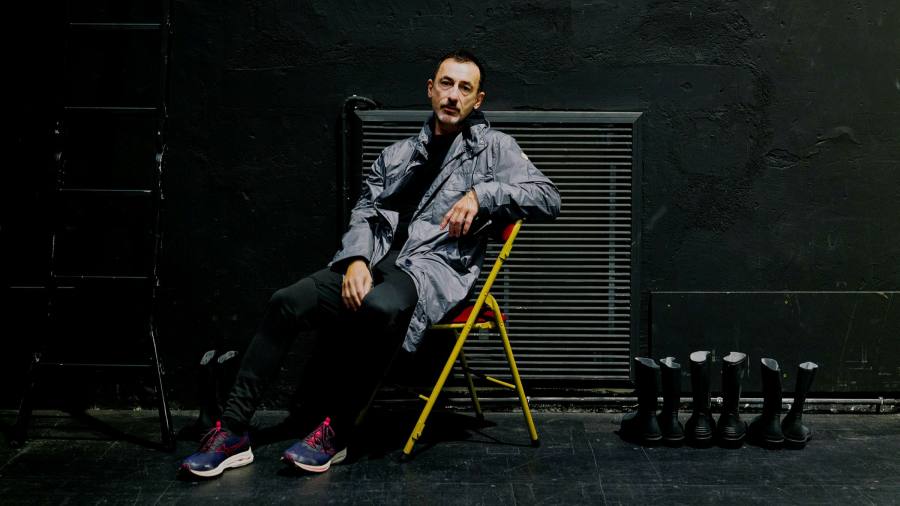 Dimitris Papaioannou and the art of painting with bodies

Dimitris Papaioannou has an explanation for his late rise on the international scene. The Greek artist had just turned 50 when he became an overnight hit in Paris in 2014; his first international co-production for the stage, the hugely successful The great tamer, followed in 2017. But Papaioannou does not see this as a purely artistic breakthrough.

“Until the financial crisis in Greece, no curator was interested in Athens,” he says behind the scenes at the Théâtre du Châtelet in Paris, where his latest production, Transverse alignment, was recently performed. He looks at me with a touch of irony. “When a country is destroyed, it becomes sexy in the art world, doesn’t it? Isn’t that true? “

So owe the Greek debt turmoil to some of the most visually captivating dances this century has seen. Like the Olivier nominee The great tamer, Papaioannous new Transverse alignment, which opens in Sadler’s Wells on October 21, is full of carefully curated tableaus relating to art history and mythology. Naked figures are born from or stand on an articulated bull; two Aphrodites conjure up different sides of the Greek goddess of love.

Slowly and fantastically, the result is firmly anchored in the dance theater dance tradition of Pina Bausch, which Papaioannou describes as one of the two “guiding lights” that inspired his theater career alongside Robert Wilson. It is not surprising that in 2018 Papaioannou was appointed to create the first full-length work of the Tanztheater Wuppertal since Bausch’s death. Since they.

Given Bausch’s own mixed reception in the UK, it’s no surprise that Papaioannou has inherited part of that suspicion. A preview of Transverse alignment in Time Out London warned “Outstanding avant-garde Eurocore”, and his consistent use of nudity sparked a loud reaction, though The great tamer joined Sadler’s Wells in 2018. “After 45 minutes a gentleman stood up in front and said: ‘I’m sick of cocks!’ and left, ”recalls Papaioannou with a giggle. “It was very cute.”

But Papaioannou, who initially trained as a painter of Byzantine icons, hardly fits the provocateur scheme. He learned to draw himself as a child, when he was 17, he looked up the address of the Greek painter Yannis Tsarouchis and knocked on his door. “He taught me the technique of painting with four colors, that is the Cretan-Byzantine technique,” says Papaioannou. “It’s just English red, yellow ocher, black and white. And it creates enormous accuracy and economy. “

Religious images caught his imagination. At home he often visits Mount Athos, the Orthodox monastery center. “I thought I was religious,” he says of his teenage years. “I am not, but I appreciate the artistry and philosophy surrounding human religion.”

His work as an icon painter and portraitist enabled Papaioannou to survive after running away from home at the age of 18. “They said both would make me poor and miserable,” he recalls.

During his five-year studies, Papaioannou also published graphic novels – and discovered Athens’ dance scene. He trained the technique of the American modern dance choreographer Erick Hawkins and spent some time in New York, where he met the butoh dancer Min Tanaka. “It was a revelation for me,” he says of Butoh, the Japanese avant-garde dance form. “I have a body that couldn’t work in contemporary dance. I worked very hard, but it didn’t look good at all. With Butoh I could go deeper. “

In 1986 he founded the Edafos Dance Theater, which soon became an underground hit. “I was a punk – it was that time. We had a squat with a group of friends in the center of Athens and turned it into a small theater. ”They did what Papaioannou calls“ human puppet theater ”, much like comics or expressionist silent films.

Artists and even ministers of culture showed up; in the 1990s the company moved to the big stages and became commercially successful in Greece. While Edafos collapsed in the early 2000s, his last hurray was the 2004 Athens Olympics, where Papaioannou was tasked with designing the opening and closing ceremonies.

“The art world is snobbish about these big shows. When I first came to Paris, I was advised not to talk about it, ”he says. He had no concerns about the demands of the job and even returned to it when asked to choreograph for the first ever European Games in Baku, Azerbaijan in 2015. “They are national propaganda works, but I am not against positive propaganda for countries. It’s a huge playground. “

He too “needed the job”, he adds openly, as he produces his work independently of his studio in Athens: “I can’t survive with the job I’m doing.” As a self-proclaimed “slow man”, Papaioannou likes to spend months refining each production before it goes on stage and almost never takes on outside work. The exception was the Tanztheater Wuppertal. “It was a trap. There are things you just can’t say no to because you would regret it, ”he says with a laugh. “It was difficult. And beautiful. But difficult.”

If you are looking for an archetype, you will most likely end up with a Greek myth

Some of the dancers have fallen for his painterly style, including Breanna O’Mara who plays in the central female character Transverse alignment. “I was very drawn to Dimitri’s specificity, the way he could articulate images and ideas about the body,” she says.

Mythology provides Papaioannou with useful clues to help convey these ideas, he explains. “I do a quiet job, so I have to have a common language with my fellow human beings. And if you look for an archetype, you will most likely end up with a Greek myth. ”Is it a cliché in Greece, I ask, to draw on the country’s rich pantheon? He smiles. “Do you know what the Olympic Opening Ceremony debate was? That we shouldn’t talk about antiquity because we’re fed up with it. “

Despite all the recent recognition in the dance world, Papaioannou still flinches when I refer to him as a choreographer. “I think it’s funny that I can be called a choreographer. I have a lot of respect for the artists who understand the craft of choreography, like for example [William] Forsythe and Anne Teresa De Keersmaeker. “

He feels more comfortable with the label formalist and quotes his favorite poet, the Persian author Rumi from the 13th century.

“I think it’s no problem to revise something,” he says. “I think it takes a lot of ocean for a pebble to be perfectly round.” He has continued to refine himself Transverse alignment since its premiere at the Lyon Dance Biennale in June; production is now, he says, “less serious”.

Before delays caused by the pandemic, Papaioannou himself should appear as a narrator. He has opted for “a more abstract story,” he says. “Things are floating around, and as a spectator you are welcome to be your own association vehicle.”