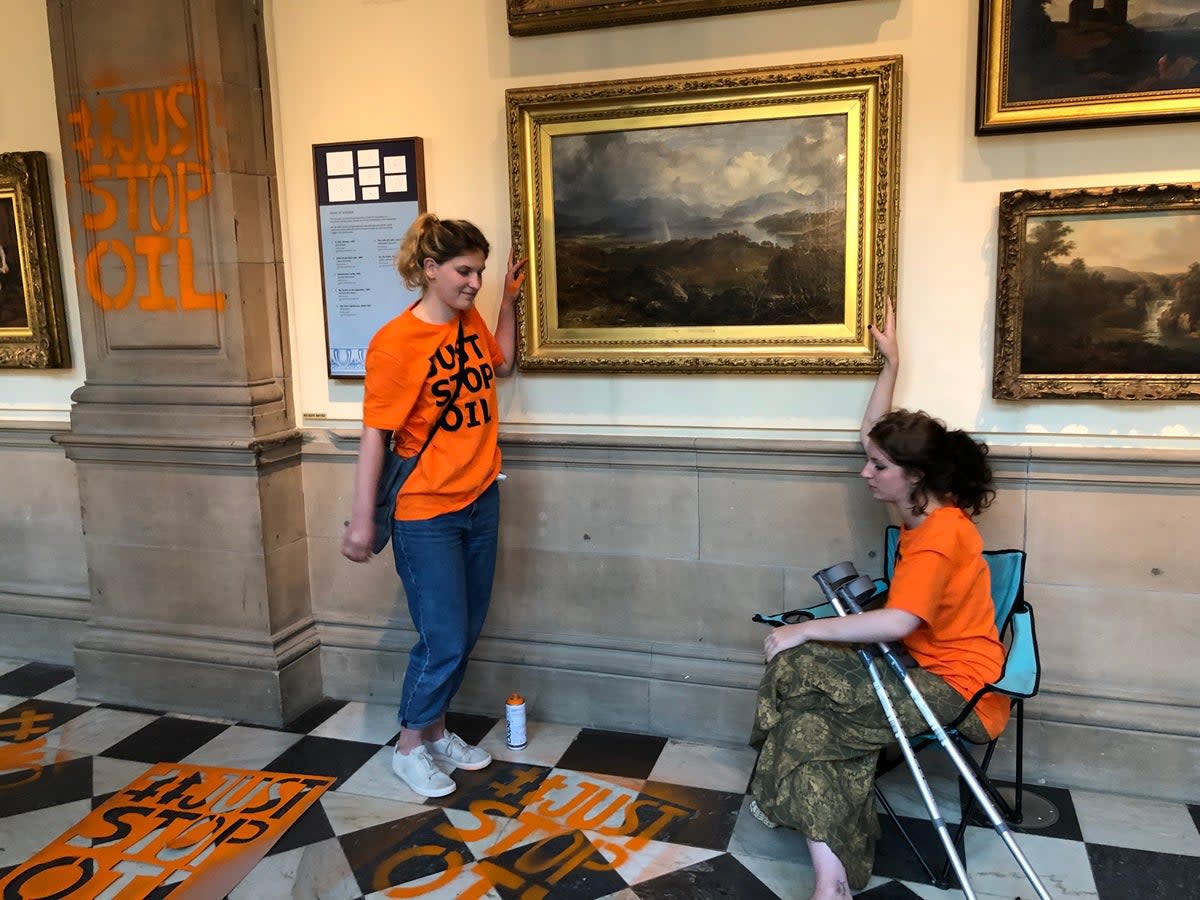 Climate protesters from Just Stop Oil taped themselves to the frame of a painting in an art gallery.

The protesters, who are opposed to new oil and gas exploration, have also spray-painted their logo on the walls and floor of Glasgow’s Kelvingrove Art Gallery.

The painting on the first floor of the gallery is a 19th-century landscape by Horatio McCulloch entitled My Heart’s In The Highlands.

Just Stop Oil, which has previously held protests at oil terminals and the UK government offices in Edinburgh, is calling on arts institutions to join the group in the “civil resistance” against climate change.

After the protesters taped themselves to the painting, the area was cordoned off by gallery workers and police arrived.

One of those who glued herself to the frame was Hannah Torrance Bright, 20, a student at the Glasgow School of Art.

She said the painting depicts a landscape that “will no longer exist” due to climate change.

The protester said she wanted the art world to talk more about climate change.

She continued, “By doing so, we attract attention by targeting cultural artifacts, we draw attention to the issue.

“Because people see that and then they get angry, but then maybe they think about why they’re angry and why we’re doing this and how it got to this point.”

The other protester taped to the frame was Carmen Lean, 27, an architecture student from Glasgow

She said: ‘This landscape was painted in 1860 at the height of the clearing in the Highlands, when whole communities of small farmers were being driven out by a new class of landowners ruthlessly pursuing their own private interests.

“It was only when smallholders organized and resisted that they won rights.

“Today, it’s oil and gas companies ruthlessly pursuing their own private interests at the expense of literally everyone.

“You endanger everyone. We must learn from the history of Scottish small farmers how to fight back effectively.”

A spokeswoman for Glasgow Life, the organization that runs the museum, said: “On the advice of Police Scotland, the Kelvingrove Art Gallery and Museum closed early this morning due to climate protests at the museum.

“Glasgow Life Museums security and conservation teams are currently working with police to assess the extent of the damage. We will inform about the reopening as soon as possible.”