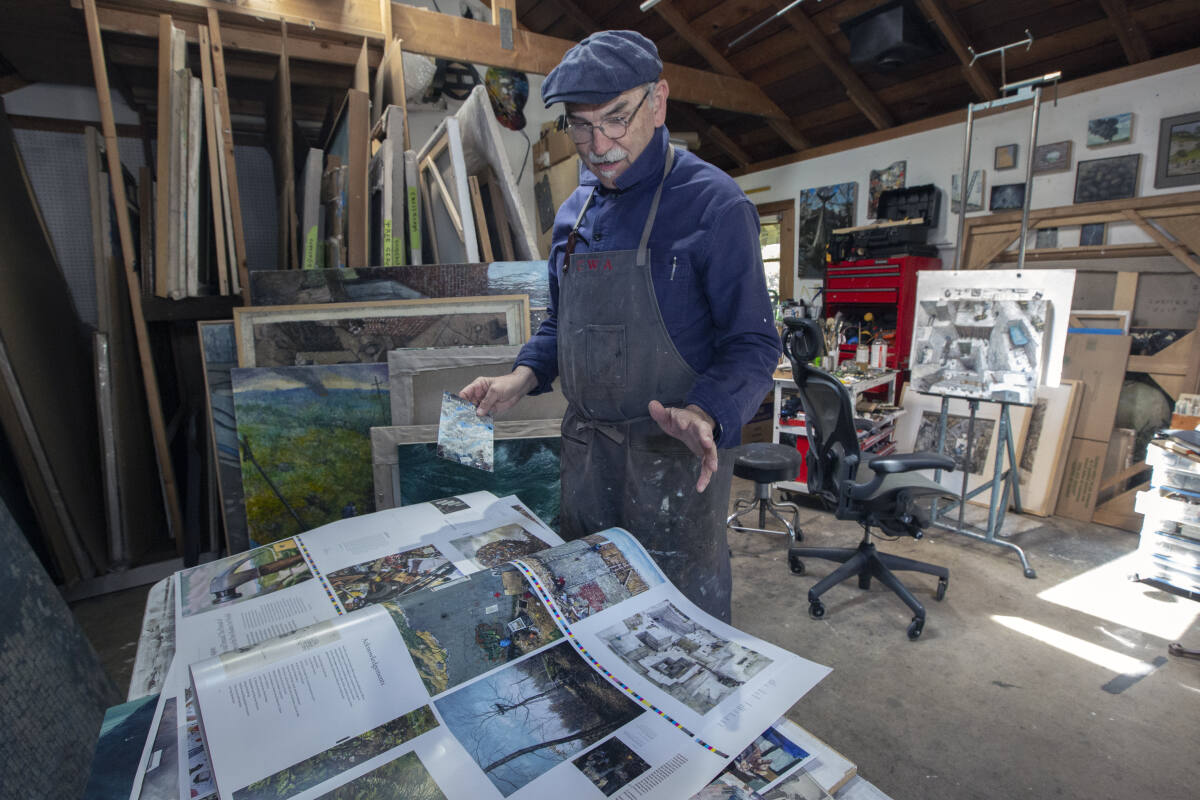 Sonoma artist Chester Arnold smiles as he considers his work will be featured at a museum this spring alongside exhibits honoring Andy Warhol and Ansel Adams.

“We’re a great combination,” he says of his current exhibition, which runs concurrently with work by these legendary artists at the Fresno Art Museum.

But on a more serious note, Arnold adds, “Having an exhibition in a museum is a great thing, and the opportunity to do it with artists you admire and respect is an added bonus.”

Arnold’s latest exhibit isn’t just any show. Through June 26 at the Fresno Art Museum, Reports to the Contrary, A Persistent Vision, Paintings 1971 – 2021 is the first career-spanning gallery retrospective of his work, though he has had more than 40 solo shows and has participated in more than 50 Group shows throughout the West Coast in his 50 year career.

While Sonoma fans are encouraged to check out the Fresno show during its run, those unable to make the trek can view the retrospective through Chester Arnold: Reports to the Contrary, an 82-page catalog of the exhibit featuring personally selected images , see and commentary by Arnold, tracing his work and influences decade by decade.

The catalog and exhibition feature 20 large works and about 20 small paintings, says exhibition curator Michele Ellis Pracy. Some pieces have rarely or never been exhibited before. The catalog will be available in May from the museum’s online store at fresnoartmuseum.org and from Readers’ Books in Sonoma.

Arnold, 70, will also host a presentation and autograph catalog on May 18 at 6 p.m. at the Sonoma Valley Museum of Art, 551 Broadway, Sonoma.

“I feel like I’m having as much fun today as I did when I started,” says Arnold. “When I go into the studio, I never know what’s going to happen, but something always happens.”

But despite his long career and standing in Bay Area art circles, it’s almost surprising that the Fresno show is only his first career-spanning exhibition. Arnold’s work has long been admired by some of the most respected names in Bay Area art criticism.

“The value of his work, apart from its joys and distractions, is to prove that the images of personal and social catastrophe that time evokes in us are not incurable,” wrote the late San Francisco Chronicle art critic Kenneth Baker , 1994 on Arnold’s work “Arnold’s skill as a painter is a visible testament and warning of the discipline required to work inwardly with such pictures.” (Arnold and Baker became good friends over the years; the catalog “Reports to the contrary” is dedicated to Baker, who died in 2021.)

In a review of a 1987 exhibition at the William Sawyer Gallery in San Francisco, Rebecca Solnit wrote, “Chester Arnold produced a wonderful series of paintings that could be called surrealist if they weren’t in a way down-to-earth that is contemporary surrealism.” Rare.”

Aside from the awards from renowned art writers, Arnold says the time frame presented in Reports to the Contrary dates back to works from his first public exhibition that were discussed in the local press.

“It was March 1972.[Art critic]Ada Garfinkel was reviewing my exhibition at the Mill Valley Public Library gallery in the Marin Independent Journal,” says Arnold. “I thought fame and fortune were surely on the way.”

A Santa Monica native, the seeds of passion were sown as a child growing up in 1950s Munich, where his father worked as a linguist and field agent for a US intelligence unit. It was this post-war atmosphere “that profoundly influenced his conceptions of humanity and the earth-shattering sense of social responsibility rarely expressed in his paintings,” according to the description of the Fresno Art Museum exhibition. “It was the encounter with the great museums in Munich and Vienna that shaped (his) belief in the power of painting to communicate beyond words.”

“It’s a serious attitude to look at people,” says Arnold about starting a life in art. “I thought I could make the world a better place by painting.”

He fully expected to miss classes, but found that contact with alumni and other passionate artists filled the gaps of “intellectual stimulation” that used to be provided by preparing for discussions and talking about people’s work in class had arisen.

Arnold’s work is lively, dense and detailed. Over time, his perceived style has embraced labels such as realism, surrealism, and the often-used “storytelling.”

At some point, he began to refer to his work as “psychorealism,” says Arnold.

But a colleague said, “Artists can’t name their own genres of painting,” so he stuck to other people’s labels. And Arnold agrees with that.

“When the emotional energy is there (for any description of his style), I just went with it,” he says. “As long as people respond with interest.”

And Arnold still believes he can make the world a better place through painting?

“What kind of validated and informed me is the way that teaching can lead people to tell the stories that we’re going to tell.”

Many of his students have left other careers over the years to find what they always wanted to do.

“What painting was,” says Arnold. “Many of these former students are now exhibiting in galleries and making more money than I do from my work.”

He compares art to “spreading the gospel”.

“Music, literature or poetry – it enables us to communicate with our fellow human beings about what occupies us in the world,” says Arnold.

“The world is an extremely interesting place. As citizens living on this planet, art is an invitation to engage with it as much as possible.”