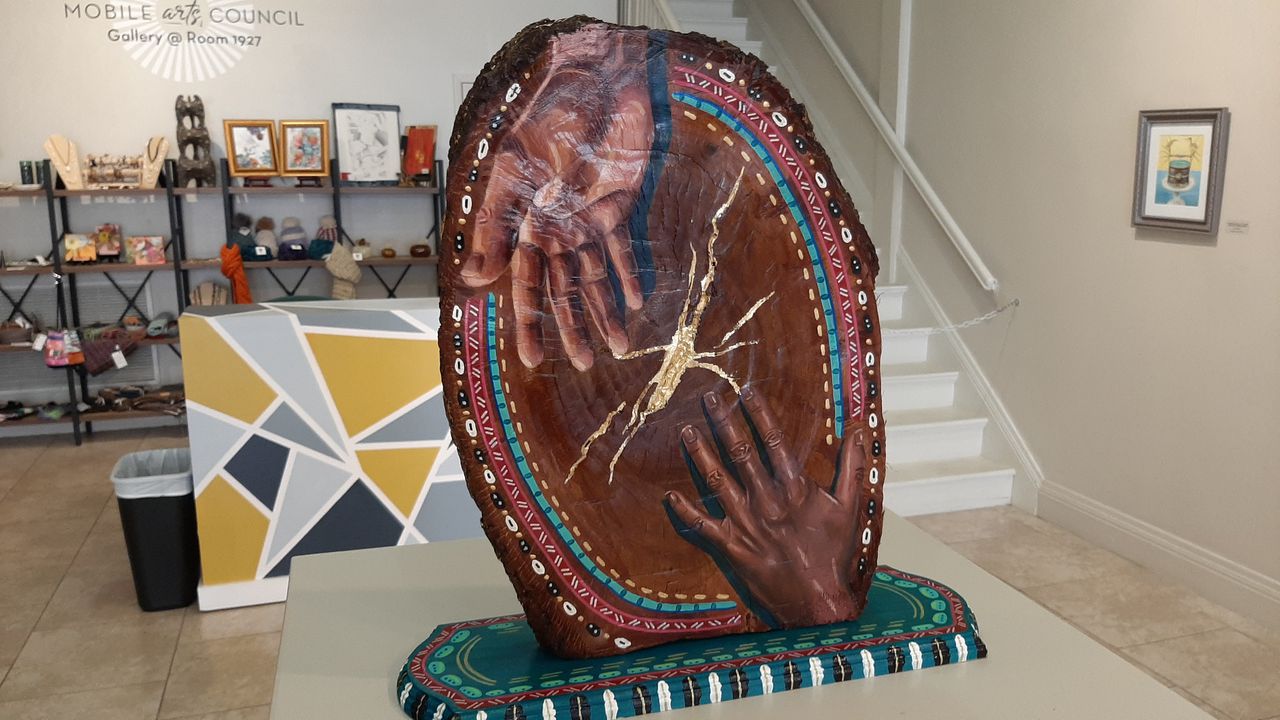 Shortly after Hurricane Sally wreaked havoc in Mobile’s Bienville Square in September 2020, an idea was born: use the fallen wood to make artwork. The healing thought was simple. As it turned out, the wood itself was as complex as its history.

Veteran wood turner Fred Retting contributed an outstanding piece to a Mobile Art Council Exhibition of works made from fallen Bienville Square oak trees. It is accompanied by a note that reads, “This was the most difficult wood I have ever worked with.”

“That sounds a little far-fetched, that’s just my way of thinking, but I suspect that under the pressure of wind and rain, the stress and exertion, trees invest a lot of energy trying to stay upright,” Rettig said. “The wood was torn through and through. I would take a regular piece of wood that I thought was beautiful on the outside and I would start to trim it down to size and there were cracks on the inside.”

“Every artist who has worked with it said it was very difficult,” Rettig said. Lucy Gafford, executive director of the Mobile Arts Council, agreed.

“That was the consensus of many artists that the wood was really problematic,” she said. It contained hidden cracks. He broke tools with his hardness and at least one pendant with his sheer weight. It was slow to dry and stabilize.

“There were a lot of obstacles, with the wood itself being particularly difficult,” said Gafford. “We appreciate the artists who managed to create works from it, because if it wasn’t for Bienville wood, nobody would have made anything out of it. … Nobody would have used it if it didn’t have that sentimental value behind it.”

If you want to see the results, you still have a few days to do so. The Fallen Bienville Oak Exhibition was shown this month at the Mobile Arts Council Gallery in the 1927 Streetfront Room of the Mobile Saenger Theatre. It can be seen until March 31st.

Artists who collected sections of branches and trunk plates in January 2021, led by Urban Forester Peter Toler, had just over a year to transform the raw material. The results take a variety of forms. Some made functional objects: a Tensaw Charcuterie Board by Delta Scott Woodworks, an electric guitar by Chris Fayland, and “Sally,” an invitingly elegant chair, by Ben Reynolds and Azalea Home Custom Furniture.

Other artists have used the wood as a canvas for a variety of techniques, from carving (Gary Mason’s “Flowers” to mixed media (Samantha Savage’s “Steampunk Ship”) to a variation of kintsugi, the Japanese technique used to repair broken pottery Making mistakes in features (Amanda Youngblood’s “Kintsugi Sisters”). Some evoked the place or paid tribute to famous Mobilians, as in Abe Partridge’s tar-and-acrylic portrait of Joe Cain and Kathleen Kirk Stoves’ pyrographic portrait of Eugene Walter. The latter titled “Hurricane Party,” carries the Walter saying, “When all else fails, throw a party.”

“I was struck by the variety of work that people created and the different techniques that were used,” said Gafford. “I would never have expected a finished guitar from this wood. Especially all the feedback about how awful it is to work with.”

She was also shocked, she said, that some of the artists donated the proceeds from the sale of their work to the Mobile Arts Council. “Nobody expected that,” she says. (Some of the works are not for sale. Others range in price from under $200 to over $2,000.)

Retting, on the other hand, can look at his vase with relief. He said he put about 50 hours of work into the project, a vase with an ornate topper inspired by Bienville Square’s fountain.

“It was intense trying to finish this piece,” he said. “There was only one part I didn’t need to fix during the process.”

For the vase, he started with a piece of wood that weighed 40 pounds. Get in shape. Roughening into shape put it at 26. Hollowing put it at five and a half pounds. This required drastic measures, because he knew he had to extract as much of the interior wood as possible while it was still green, so that the rest could dry and stabilize. “That way it wouldn’t break in two while it was on the stand,” he said.

He has a photo of an interim stage where the project was held together by something not typically found in a wood shop.

“After I cut the piece, I knew that if I didn’t do something to hold it together, I was going to be in trouble,” he said. “So I bought some radiator hose clamps, and there are six sets of hose clamps on this part that hold it together.”

Like other artists, he had to find a way to use the cracks he couldn’t fix. He filled them with turquoise “representing water flowing from the spring”.

“I ended up having fun,” he said. He was still polishing the piece the day he delivered it. “I got through an hour before the deadline,” he said.

“If these trees could talk, from what I’ve read they were planted in 1890,” he said.

“If” they could speak? Thanks to Rettig and the other participating artists, they are now doing it.