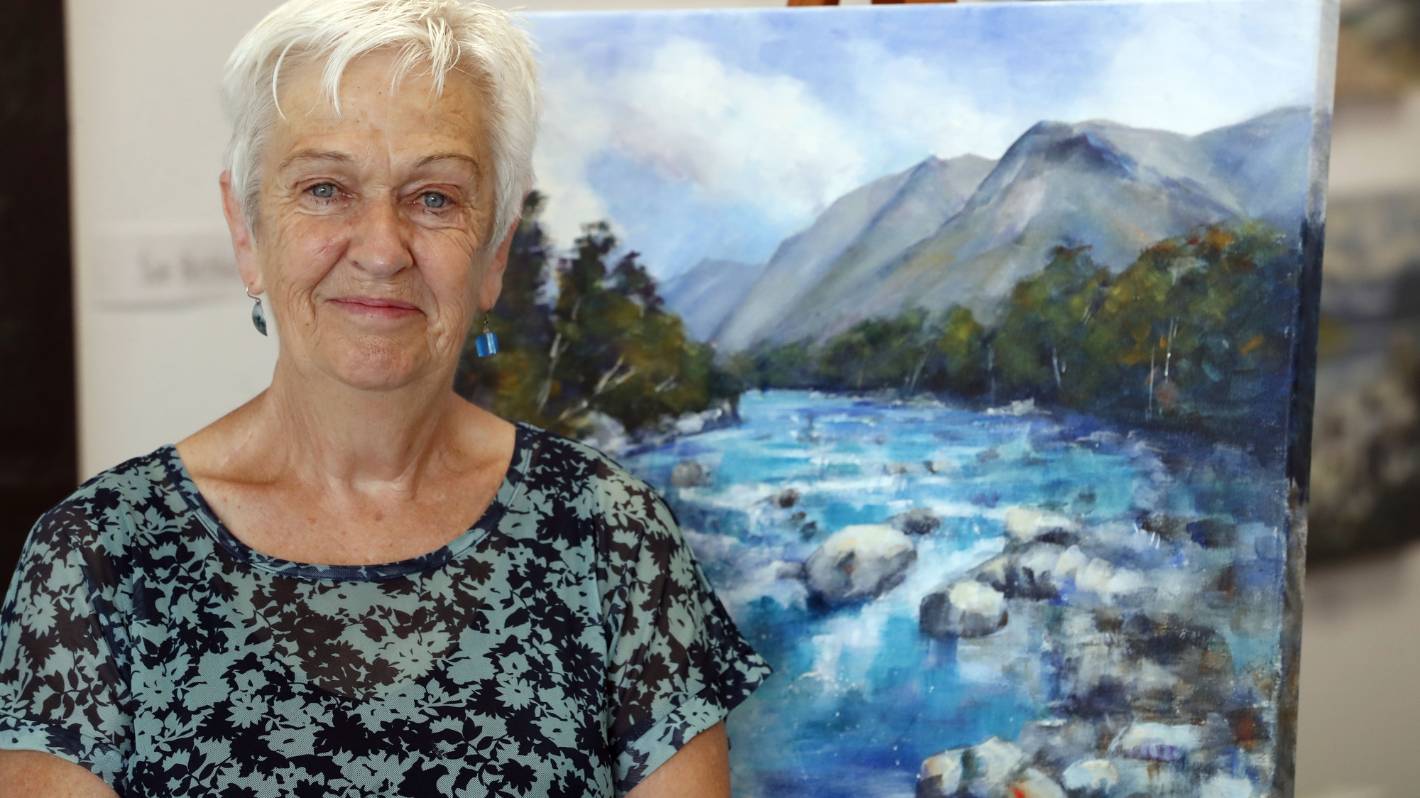 Artistic longing for the highlands

St Arnaud artist Jan Thomson with her painting of the Wairau River at Rainbow Station in Marlborough on display at the Wall to Wall Gallery in Nelson.

St Arnaud artist Jan Thomson loves to set up her easel on a remote high country farm and be inspired by the stock, wildlife, buildings, people and surroundings.

Over the last three years she has built up a collection of paintings depicting life on the farm which will be on view at Nelson’s Suter Art Gallery in her solo exhibition until February 27th woolshed into the wild.

Everything from farm buildings and grazing livestock to farm workers, wildlife and stunning rural landscapes is captured in the exhibition, which is a collection of around 30 acrylic and watercolor paintings.

Through years of stationing in the highlands, Thomson realized there was more to it than just the scenery. Many of the families have farmed the land for generations under difficult conditions.

Most of the farmers she met were passionate conservationists and were very concerned about the health of their soil and stocks and the preservation of waterways, as the farms are often passed on to the next generation, she said.

One farmer had even written a poem about his station, which Thomson included in their exhibit.

“It’s the history of the stations that tries to give people a little glimpse of what farmers are actually up to,” Thomson said of her exhibit.

As a professional artist, she has a studio in St Arnaud – Korimako Studio – and also holds workshops in small towns and rural areas of New Zealand so residents in those areas who may not be able to afford art classes in cities give it a try . Thomson is also part of the wall-to-wall art collective of 12 artists in Nelson, with some of their work on display at the Wall-to-Wall Art Gallery in Bridge St.

It was a pumpkin that launched her into the world of art 22 years ago.

One day, while cooking dinner, she was chopping up the “beautiful” blue crown squash when she felt the need to draw it with her daughter’s crayons. The next week she signed up for art class and hasn’t looked back.

Twelve years ago she moved from “one of the busiest” streets in Wellington to the small and tranquil hilltop town of St. Arnaud in Nelson Lakes National Park, which then had just 64 permanent residents, she said.

Next to her property is the “No Catch’em” farm, which she often paints from her backyard.

Scenes from this farm are included in their exhibition, along with paintings from nine other stations, including the highland stations of Molesworth and Rainbow in Marlborough, and stations of Glentanner, Mesopotamia and Glenfalloch, which are set against the dramatic backdrop of the Southern Alps.

She also paints regularly at nearby Lake Station against the stunning backdrop of the St Arnaud Range, and during shearing season she often pops up beside the wool press to paint the shearers at work.

Changing light conditions mean her highland station landscapes have to be painted quickly, which she enjoys because it requires concentration on the most important subject.

“It’s about capturing the atmosphere and making you feel like you’re standing next to me at my easel,” she said.