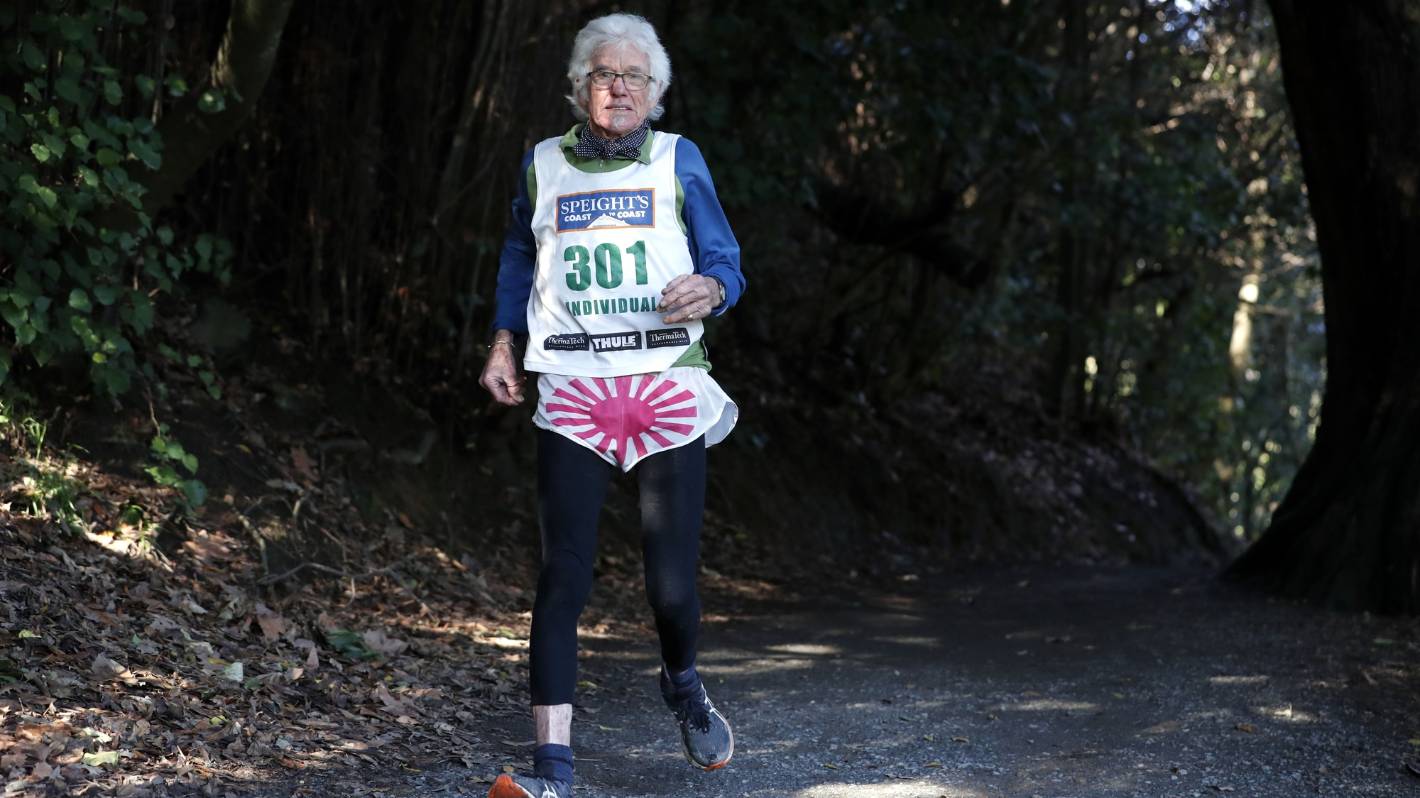 Nelson jeweler and artist Mike Ward celebrated his 80th birthday by inviting a local running group for a morning run, capped off by shouting a hot brew at his favorite coffee cart to the crew.

The Nelson jeweler and artist started running in the 1970s and he says, “I’ve been running ever since.”

He remembers the moment the switch was flipped to find him banging on the sidewalk most days.

He taught in the arts department at Tokoroa High School, and although he was “moderately active,” he did not play sports.

CONTINUE READING:
* Building a tiny house in my 80s sounded absurd. I did it anyway
* Japanese, 83, ready for more after crossing the Pacific alone
* Nelson mayoral candidate Mike Ward’s vision for a model city

“One of my colleagues … who was the national marathon champion at the time said I had to jog. So my practice went from my home… to my classroom.”

From then on he was gripped by running fever and in 1975 he began to participate in running events.

Since then, the jeweler and former politician has done Coast to Coasts and marathons, but he says it’s “almost 10 years since a Coast to Coast.” He hasn’t run a marathon since he was 72.

“I probably won’t lead another one.”

But the shorter runs still get him up early in the morning “five or six times a week.”

“This month I’ve got the 5k series every Wednesday night and an occasional Saturday run, a longer run on a Sunday and I’m out early the rest of the week.”

Moving your legs is good for your brain, he says.

“You think you relax, when you think about something that needs to be worked on, it’s a good time to work on it and it’s a great stress reliever.”

But Ward says running isn’t as easy as it looks.

“It’s not something that just comes. I usually run early in the morning, it’s never as comfortable as waking up in the morning and it’s dark outside. You don’t decide in the morning, you decide the night before. It’s a discipline”

And while age hasn’t discouraged him from running, it has slowed him down.

“It takes twice as long to travel 5 km as it used to.”

On his birthday, July 18, he invited his local running group, the Harriers, to one of his regular runs. They ran through central New Zealand and ended up in the Botanical Reserve at one of his favorite cafes, the Joker Coffee Cart, where he yelled a hot brew at everyone.

The distinctive artist can be recognized by his style, always wearing and continuing to wear a bandana on his runs.

He says he got into the bandana during his art class days in the early ’70s.

“I had a particularly bad day when I guillotined the end of my tie, spilled paint on me and got my pants snagged on a bit of ghost. I realized that wearing good clothes in a classroom was not hip. I went with cords, t-shirts, jeans and usually a jacket. I gave away the tie and started wearing a scarf – and I’ve only worn the scarf ever since.

“It’s really useful if you forgot your handkerchief. It’s very handy when you’re sweating and you can wrap it around your forehead.”

He used to buy them, but now he makes them himself on his sewing machine, and a friend makes them for him too.

“I got three new ones for my birthday, black with white dots.”

About becoming an octogenarian he says: “It sounds old to me, I don’t feel particularly old”.

“I’m thinking about what I’m going to do over the next ten years to justify my existence. I wake up stressing how little time we have to make it right on the planet and… how much more needs to be done and what I could do. So there’s another book on the horizon and maybe another campaign, who knows.”