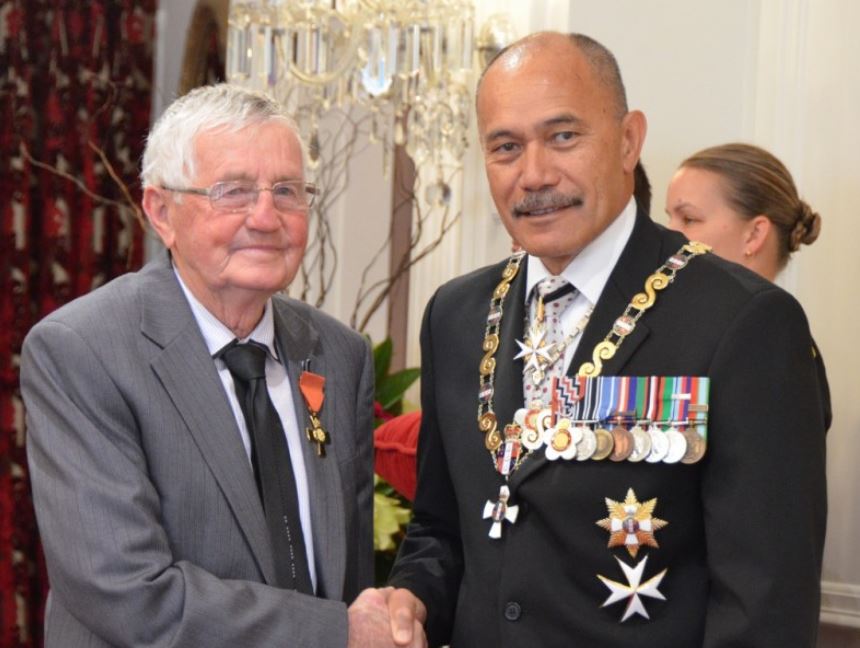 Brian Anderton (ONZM) has left an indelible mark on New Zealand‘s thoroughbred industry through his actions with White Robe Lodge on the outskirts of Mosgiel.

It’s a legacy spanning 17 years of being a jockey, trainer, breeder, owner, manager and mentor to young apprentice jockeys.

Although he has dedicated his life’s work to the Thoroughbred Code, he has had more than his fair share of successes on the Standardbred side, highlighted by a Trotting Champion he co-bred which was presented to him at Thursday afternoon’s Gore meeting heard.

Anderson/Love trained Jovial Jay (Sweet Lou — New Years Jay) was fresh and on his first run in six months when he competed in race seven on the map.

His pilot Matthew Williamson wasted no time in finding the front from his handy barrier and leading them in a merry dance that saw him burn home in his final 400m in 26.8 to easily win by two and a quarter lengths .

“We gave him a pretty good rest here at home and sent him back to Graeme a few months ago to prepare for this campaign. He’s a man of few words but he told us he’s a nice horse and he’s improving,” he laughed.

Though Anderton wasn’t there to see it with his own eyes, he watched with interest from his home in North Taieri.

“I didn’t go to the races very often. I’m getting a little older and a little slower these days, but I’m still very interested in racing.

“It was a huge thrill to see him win. Graeme has taken care of him and treated him well and although he is still developing we have high hopes for him,” he said.

It was the second win in four starts for Sweet Lou’s son, who also took second place as all his races so far have been held south of the Waitaki.

She was good enough to get behind Titan Banner (Art major) at the 2017 Hannon Memorial and will be remembered for a devastating foot twist when saved for a run.

“I’ve sold the last two of New Years Jay’s at the auctions and have taken the same approach to the breeding horses here at home where we sell the colts and geldings and keep the fillies and top up the old ones on the bank account a bit too”, he laughed.

“The mare is at home here and she is in foal to Art Major,” he said.

Anderton’s commitment to the breed dates back almost as long as his association with the famous thoroughbred nursery White Robe Lodge.

“It goes back about four out of five generations. We got a mare named Blue Jay (Big Flame – Princess Sheila) from Mouse Kennedy’s father in the 1970’s and brought her to Lordship, the best sire available at the time.

“Blue Jay is a half sister of Blue Prince (Hal Tryax), who ran in a New Zealand derby and placed in a New Zealand Cup. They were both gray and we wanted to get another one so we bred New Years Jay’s mother to the Klondike Kid and although we got the gray she wasn’t very quick,” he laughed.

The gray horse in question is Mousey Jay, who once raced at Forbury Park before being added to Anderton’s boutique Standardbred broodmare band.

“It’s a good hobby for me. We had Yankee Jay out of her (Washington VC) on Friday night in Addington with Coaster Howe in 5th place and sent another filly on the wagon to Coaster this morning Below on this page named Sea Jay.

“She descends from a Bettor’s Delight half sister by New Years Jay called Delightful Jay but unfortunately we lost her in foal to Art Major. Yankee Jay will take her place; two is enough for me as far as pacemakers go,” he said.

At 85, Anderton’s encyclopaedic breeding knowledge lends itself very well to his hobby, where he can quickly revoke many of the best pace sires and families from our studbook.

His breeding philosophy is simple; “We go through the stallion register and always try to come up with the best.”

In terms of how the mares are served in their respective codes, Anderton is adamant that Mother Nature is his preferred method, although pushing genetics in the Thoroughbred breed is more difficult.

“I’m probably the wrong person to talk to. In the harness, of course, it has become much easier, now with artificial insemination. As for convenience, it’s great because you don’t have to take them off the field and you can go to the best bulls from around the world.

“I’m a big believer in natural mating and I think it helps to give each stallion his chance. With AI it’s very easy for the top sires to flood the market and there are so many of their offspring but when I think of Mellay and some of the great sires I’ve had here they have had very few mares get theirs first seasons.

“However, if they bring some panache and are able to bring out the best in the mares, they will ultimately be successful,” he said.

Though in the twilight of an incredible career spanning several decades, Anderton still keeps a close watch over what has become a family affair.

“My son-in-law, my daughter and my grandson run the stud farm. My son Shane runs the stable part here anyway; I’m still in. He was on vacation for a week or two and I was down there doing the work. I’m a very keen observer these days. If I’m there and ask a question, I’ll answer it, but they pretty much run the ship,” he joked.

by Brad Reid for Harnesslink

What is Chautauqua? A short story.

Hit! How the ’80s post-punk band Lining Time crystallized a moment in the history of feminist protest music