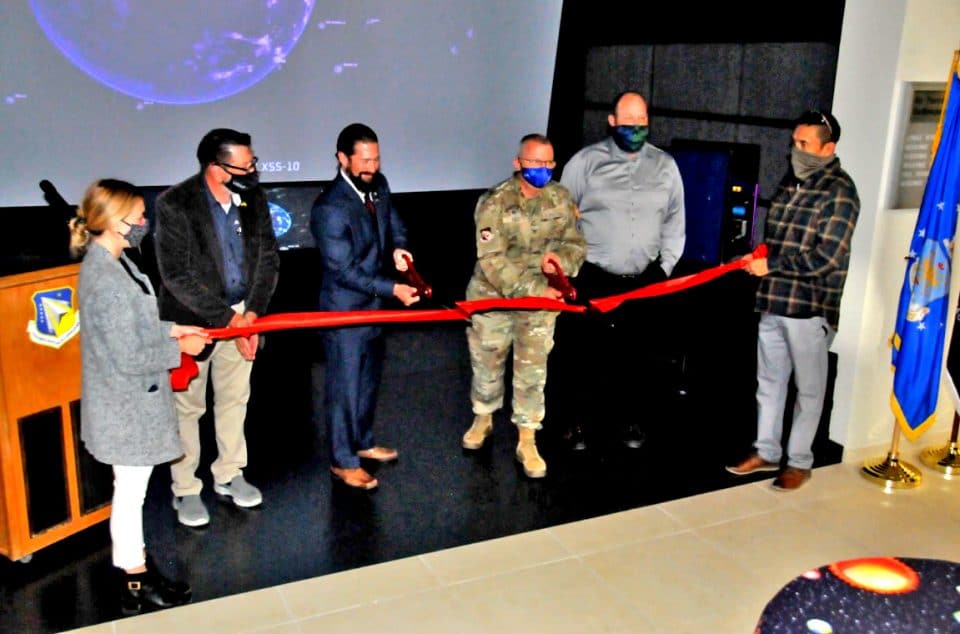 KIRTLAND AFB – Dr. Darren Raspa, historian at the Air Force Research Laboratory Phillips Research Site, greeted guests and colleagues at the grand opening of the AFRL Legacy Portal Mission exhibition with a video of the historic 1969 Apollo 11 launch shown on the nearly two-story screen behind him Control of the Space Vehicles Directorate in a ceremony on November 15 at Kirtland AFB.

“This project began more than three years ago with the idea of ​​using the darkened and unused atrium area in the lobby of the main management building as a visualization and scintillation room where our scientists and engineers could meet to discuss and do their work present. ”said Raspa. “To see this monumental take-off by US astronauts to the moon is just a foretaste of the potential that this exhibition holds.”

In the summer of 2018, Raspa and the site’s senior facility engineer, Bradley Rieck, met with Col. Eric Felt, the director of the AFRL Space Vehicles Directorate, to outline their vision for a digital interactive exhibit that would bring the AFRL Phillips Research Site’s space history to live.

Leading up to this meeting, Raspa visited the curators at the Smithsonian Institution’s National Museum of American History in Washington DC, the Central Intelligence Agency museum in Langley, Virginia, and the Sandia Laboratories National Security Technology Gallery Museum at Kirtland AFB for the latest in historical exhibition design and technology.

“During my visit to the Smithsonian, I noticed a phenomenal interactive exhibit at the Air & Space Museum on the space shuttle and saw that the designers were a group called Ideum from Corrales, a stones throw from Kirtland in the Northern Valley,” said Raspa. “After the discussion with Col. Felt, I was convinced that Ideum could create an exciting space exhibition portal for AFRL.”

The contract to build the exhibition was managed through AFRL’s Tech Transfer Collaborative Office under the Lab’s Partnership Intermediary Agreement with New Mexico Tech.

Dr. Hugh McDonald, Executive Producer at Ideum, spoke to the crowd and praised AFRL for its history in space and the benefits the project will bring to the laboratory.

“Ideum designed this exhibition to tell the Space Vehicles Directorate’s history of space exploration and development,” he said. “It was a great pleasure for us to work with Dr. Raspa and the AFRL team to work together to create a forum to showcase the revolutionary work AFRL has done and will continue to do for our nation. “

The multi-touch display allows visitors to monitor and explore the lab’s collection of spacecraft information and visual assets in a “real-time observer” fashion.

“The Legacy Portal exhibit is modeled on a ‘futuristic user interface’ style – an idealized surface design style known for displaying wildly dense arrays of data points in elaborately designed, often mesmerizing, kaleidoscopic motion graphics,” said Raspa. “The core of the experience is the interactivity between the large projection surface and the 65-inch Ideum multi-touch table, which form the heart of the atrium.”

Raspa went on to explain that the portal will not only be a “story channel” for the Directorate’s space programs, allowing updates and edits, but will also be an inspiration to the AFRL workforce.

Felt described the opportunities the exhibition will offer to understand the past and help AFRL solve the challenges in space going forward.

“I’m very excited to be here today for the opening of our Legacy Portal,” said Felt. “It’s all about the past, present and future and a chance to highlight our history.”

“This exciting exhibition will allow us to see how we got to where we are and what we can and should do in the future,” he continued. “It’s a place for the present where we bring visitors and where we can learn and appreciate our important contributions to the US Air Force and Space Force. It’s a place for the future and how we can continue our space legacy and be an inspiration to those who come after us. “

The Air Force Research Laboratory (AFRL) is the main scientific research and development center of the division of the Air Force. AFRL plays an essential role in the discovery, development and integration of affordable warfare technologies for our air, space and cyberspace armed forces. With more than 11,500 employees in nine technology areas and 40 other operations around the world, AFRL offers a diverse portfolio of science and technology, ranging from basic research to advanced research and technology development. For more information visit: www.aforsearchlab.com

Robert Farris Thompson, “Guerilla Scholar” of African art, dies at the age of 88

Occhiogrosso’s art reflects pandemic, women in her family – The Daily…

Exhibition and sale of “Art for the Middle” planned