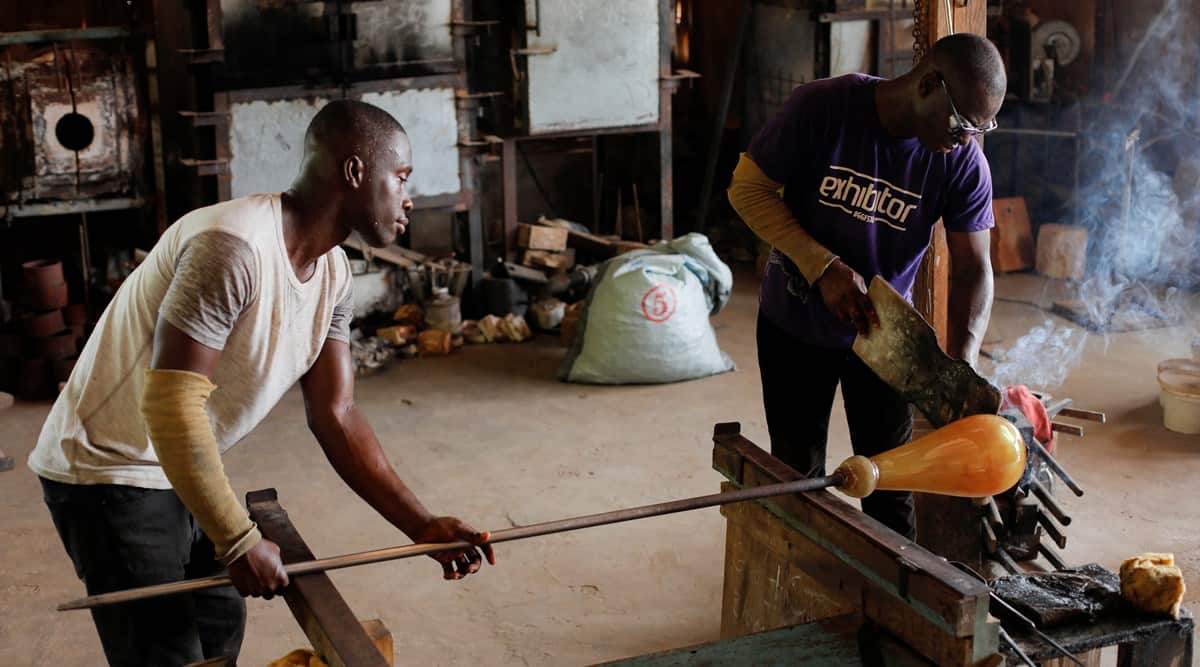 Michael Tetteh, Ghana’s only professional glassblower, gritted his teeth as he grasped a red-hot sphere of molten glass, his burned and blistered hands bare against the steaming stack of wet newspapers he was using to protect them.

The 44-year-old toiled in the heat of scrap furnaces that burned at nearly 1,500 degrees Celsius (2,700 Fahrenheit), pregnant with melted windows, television screens and soda bottles that he would soon transform into elaborate vases of psychedelic hues. Some become red vases with black stripes, others green jugs, and some clear, everyday bottles.

“Glass…is my passion, my heart,” he said. “It’s like life. It takes you on a journey from one (stage) to another.”

Tetteh’s strict use of recycled materials, which he collects from scrap yards and landfills in the capital Accra, is part of his stated mission to reduce Ghana’s glass waste and what he sees as wasteful imports.

He envisions a Ghana free from foreign glass and having channeled its tradition of glass bead making into a modern, multi-faceted industry.

According to the Observatory for Economic Complexity, Ghana imports around US$300 million worth of glass and ceramic products every year. More than 80% of this comes from China, the world’s largest glass exporter.

Michael Tetteh inspects a piece of glassware after it has cooled for more than 48 hours in his glassware factory2. (REUTERS/Francis Kokoroko)

While some private companies recycle their glass, Tetteh said the majority of glass waste in Ghana either ends up in landfills or is scattered on the country’s roads, posing a safety risk.

“We don’t have a (waste glass) collection procedure and we don’t want broken glass to be flying around like that,” he said. “If we use recycled (materials), we can make money.”

Hailing from the town of Odumase-Krobo, the epicenter of Ghana’s traditional glass bead culture, Tetteh discovered glassblowing in 2012 after spending several months in France and the Netherlands learning the craft with other Ghanaian beadmakers.

Alone in his desire to continue after returning home, he set himself the goal of opening a proper Hot Shop in Odumase-Krobo.

Undeterred by the lack of money, he built stoves out of scrap and clay with the help of online tutorials. He honed his skills by watching YouTube videos of famous glass artists like American Dale Chihuly.

He has since hired several young Odumase-Krobo assistants, whom he trains and hopes they will one day run their own workshops. Her work can be found in boutiques in Ghana and Ivory Coast and has been featured in European and American art galleries.

“My heart (wants) to educate young Ghanaians, both men and women, so that they can learn this profession,” he said. “We don’t have to go to other countries like China to buy what we want for Ghana.”