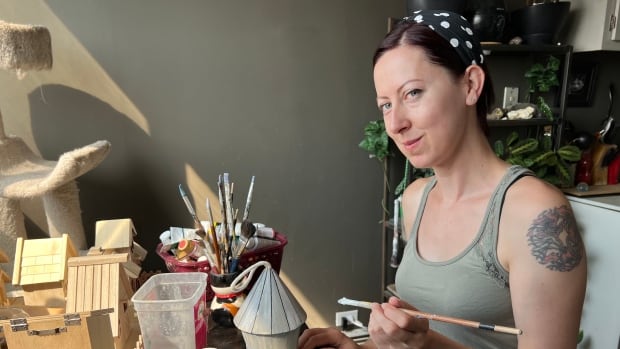 A Calgary woman lights up downtown with decorated birdhouses and planters

After living west of downtown Calgary for more than a decade, parishioner Christine Bolcsfoldy decided it was time to brighten up her street.

“I want to make my home a beautiful place. And in recent years, for a lot of people here, it’s gotten so tense and unfriendly between crime and people fighting,” she said.

Last year she made it her mission to bring some life to the planters along Seventh Avenue SW near Ninth Street.

“I was so tired of seeing these desolate, empty planters being abandoned by the city that I just decided if they don’t care enough about picking up the trash or cleaning them up, then they won’t care, whether I plant everything in there,” said Bolcsfoldy, who works full-time in the trades and is studying to get her journeyman’s certificate.

This summer, she’s taking it a step further by decorating birdhouses and hanging them in trees along her street.

“I want to put a smile on people’s faces when they walk by,” said Bolcsfoldy, who pays for the plants and bird feeders out of his own pocket.

In the last month she’s built four birdhouses, each with its own theme: a fairy-house style house, a 1970’s camper-style house with wood paneling, a late 1980’s-inspired birdhouse with vinyl siding and glittery stucco, and a bumblebee – Style house as “a nod to the pollinators in the area”.

She also placed more wildflowers in the planters near her building as a food source for the bees.

“I am very smart. I love working on new artworks and projects. But the birdhouses just came to mind as I was walking through the craft store, like a little light bulb going out,” she said.

Bolcsfoldy not only plants flowers and builds birdhouses to decorate her neighborhood, but also regularly leaves fresh water bottles in the planters along her street for anyone who needs one.

“Maybe someone is having a really hard time and this water bottle will help. Or maybe someone who’s had a hard day at work and sees a cute, silly little birdhouse makes them smile for a minute and that makes it better,” she said.

Since she started this project, there have been a few “speed bumps” where people have ripped out litter from the planters and thrown it onto the road.

However, “some nice people” from local garden groups helped her get more plants to replace the ones that were destroyed, Bolcsfoldy said. Now, with more wildflowers in the planters, she thinks it will be harder for people to rip out the litter fillers and destroy them.

“Displaying these handcrafted creations is a great way to showcase both what Calgary is all about and the artistry of our citizens,” he said.

Bolcsfoldy hopes to add more bird feeders in her area, but in the meantime she’s already taking requests from people interested in doing the same in other neighborhoods.

“Maybe there are more people who want to get involved and make our neighborhoods more vibrant,” she said.

Spotlight: An online exhibition reveals connections between dozens of works by contemporary artists from around the world